This week Europe’s largest Biofuels event took place in Nottinghamshire amid growing concerns about severe impacts on climate, biodiversity and food production. The exhibition, featuring over a hundred trade stands, ran alongside a conference which opened on Wednesday with a key note speech from BP Biofuels’ Europe & Africa Director Oliver Mace, but was quickly thrown into chaos when a number of people dressed in suits marched onto the stage and pied the BP’s CEO for the ‘dangerous and dishonest’ greenwash and protest at the catastrophic effects of replacing climate-stabilising ecosystems with arable crops for biofuel feedstocks.

Throughout the afternoon, people held a very visible protest outside the conference which was held at the Newark Showground, north of Nottingham. To coincide with the national Biofuels Conference, protestors from No Agrofuels UK blockaded the D1 oils refinery and offices in Middlesbrough to raise awareness of the detrimental impact of agrofuels. 18 Protestors chained the 3 gates to the refinery shut and 2 protestors were D-locked to the main gates. No vehicles were able to enter or leave the site and all work appeared to have been stopped. Several banners were tied over the gates including "No Agrofuels, Land 4 People, Food, Biodiversity" and "Climate Change Profiteers". 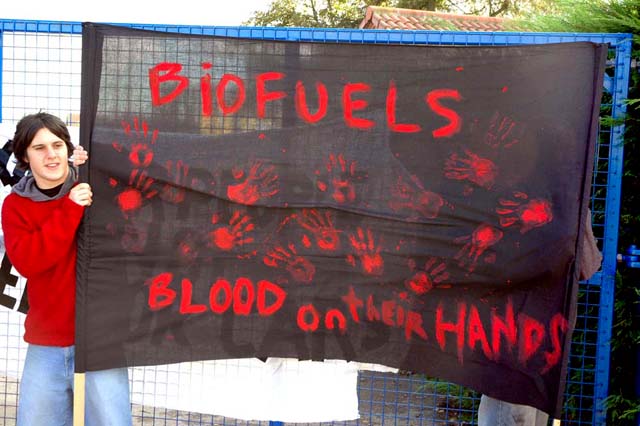 This morning a group of 15 climate change activists from protest group Food Not Fuel entered the Bio Fuel Expo & Conference taking place at the Newark Showground and took over the keynote speech. Oliver Mace, CEO of BP Fuels, the lead sponsors of the event received a cream pie in the face. Another campaigner was D-locked to the podium and various alarms were placed around the place. The hall was emptied and talks were cancelled. There were no arrests.

1. The protestors argue that radical social change is needed to deal with the impact of peak oil and climate change, and that seeking solutions such as carbon trading and biofuels are not the answer, as the real problem is unsustainable economic growth.

2. The Bio Fuels Expo & Conference (www.biodiesel-expo.co.uk) is the largest of its kind in Europe, and brings together big industry players such as BP Fuels, Deloitte & Touche and many chemical, agricultural and manufacturing companies.

3. A comprehensive critique of biofuels can be found at Bio Fuels Watch (www.biofuelwatch.org.uk) who are a distinct group from Food Not Fuels, but are hosting their own demonstration against the Conference.

The Solution: We will need to reduce our consumption to levels that we can meet ourselves. This WILL mean a reduction in luxuries, like the luxury to travel. Some biofuels will be used, but at a fraction of our current oil use. We need to end the search for technological solutions to economic problems. We need to localise our economy, produce our own food, make our own tools and use less. We need an end to economic growth.

Photobioreactors : part of the problem or solution? 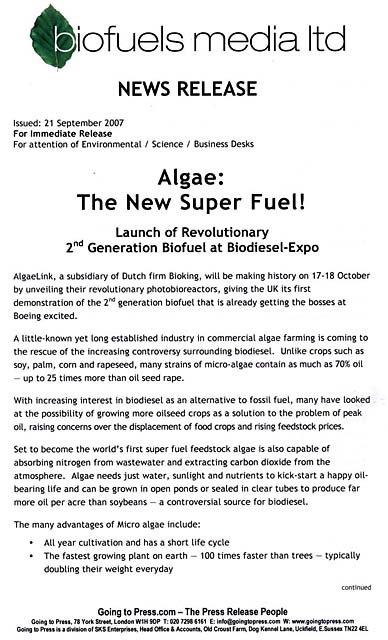 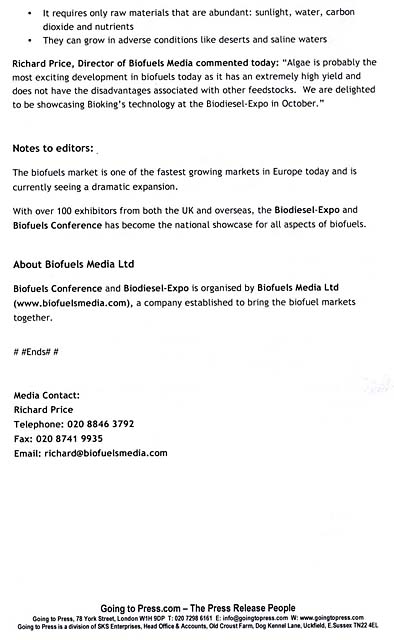 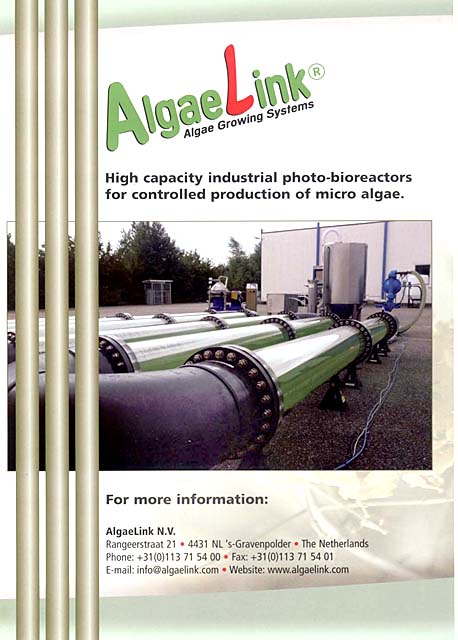 Photobioreactors : part of the problem or solution?
Please help, I'd like to know.
Having attended the Biofuelwatch talk at the Sumac Centre, Nottingham, I was reminded of many of the issues surrounding biofuels. I knew much of this before, but found the talk really useful and informative in reminding me of the 'greenwash' surrounding this field.

I think perhaps the main problems are that by multi-national companies are using these technologies, to extend their 'green' credentials and hoodwink the public into thinking that their activities are socially responsible after all. This is why the activist 'cream pied' the main BP speaker.

The idea of using less fossil fuel and extending fuel efficiency is not just a future ambition, but is a required activity. Rather than just adjust our lifestyle, abandon the idea of economic growth and simply use less resources, we are told that we may be able to grow ourselves out of the futures fuel shortages. The fuel Vs food tension for land use then has serious implications for us and most of the developing world. It is apparent that global agriculture as it currently constituted, does not the ability to feed us all. So, now there is pressure to tear down rain forests to make more space. Famine, follows not only wars, economic greed but also now increasingly environmental damage. If we cannot grow sufficient food for us humans, what proportion of the fertile lands should we give up to grow biodiesel and the like?

I went to the conference / exhibition, know all this and it informed most of my objection ....... but while there, I came across an exhibitor AlgaeLink. This is a Dutch company and they demonstrated their Photobioreactors! They take on, all of the above objections and they say, have some significant advantages. Among which are that
1. Algae grows 100 times faster than trees, typically doubling their weight every day.
2. They can grow in adverse conditions like desert and saline waters. [So is not in competition with food land use]
3. Requires only sunlight water some nutrients and carbon dioxide.
4. Absorbs carbon dioxide from atmosphere, hence assisting with diminishing a greenhouse gas.
5. Absorbs nitrogen from wastewaters.
6. Systems are easily installed and are fairly low tech, requiring little maintenance. Perhaps might be described as 'appropriate technology', in that they might not just be successfully maintained by 'developed economies', but generally in the world. Transporting such resources would be diminished, when locally grown.

Now, I'm not a salesman for the company :-) but I have to say that I have been wobbled in my opposition to 'biofuels' when all put into one basket. This method is described as a 'second generation' biofuel. This method does seem to address a lot of my concerns. While accepting that the so called advanced and developing countries so obviously need to consume less resources anyway, I do think that this technology, when developed, might me added to the solution side of the equation, rather than the problem column.

I add this lot here to express what I've found out, and ask others to critisise, if I'm wrong in these conclusions.