Day of Action on Food and Climate Change

Climate activists took action across the country and beyond to coincide with the start of the UN Conference on World Food Security, Climate Change & Bio-energy in Rome. "As world leaders and corporations come together to talk more hot air, people across the UK are taking real action on food and climate change.

In Girton, Cambridge, Earth First! activists visited the laboratory and offices of the National Institute for Agricultural Botany (NIAB), others came together for a protest outside Newham town hall in East Ham to object the UK's first biofuel-fired power plant to be built, in Beckton. Manchester saw some guerilla gardening as well as free food giveaways in London, Sheffield, Bistol, Nottingham, Glasgow, Liverpool and Amsterdam. Ready, Steady, Skip!, a new film and website about the joys of skipping was also launched from Nottingham to coincide with the "Days Of Climate Action" food day. 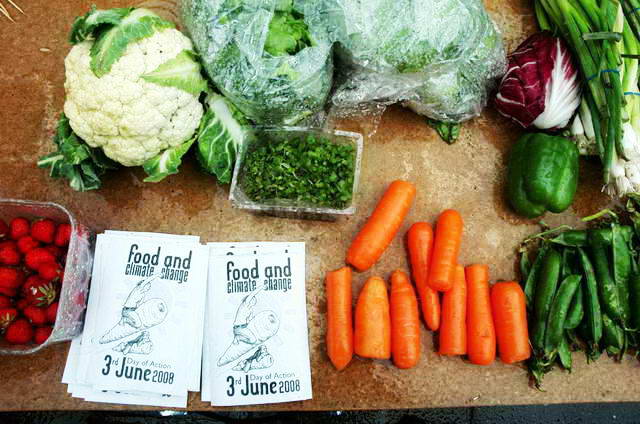 Campaigners from the Network for Climate Action organised demonstrations, guerrilla gardening, film nights, workshops and free foodevents in 20 cities across the UK, and internationally, all calling for a drastic shift in the way we produce and consume food.

Environmental protestors from Earth First! UK staged a peaceful protest at the laboratory and offices of the National Institute for Agricultural Botany (NIAB), in Girton, Cambridge on the 2nd June. About a dozen activists invaded the site and hung banners from buildings in protest at a trial for genetically modified (GM) potatoes being carried out at the Institute by BASF, a German based company. The GM trial at NIAB is being conducted under siege-like conditions with high levels of security, including a permanent security personnel presence, high metal fences, alarms and floodlights. The BASF potato trial at NIAB is one of only 2 outdoor field trials taking place in the UK this year and is a trial for blight resistance in GM potatoes; a further trial for nematode resistance is taking place near Leeds, under the auspices of Leeds University and has also met with local opposition.

In London, vegan campaigners we took to the streets of Chancery Lane to treat the city workers to some vegan food samples. See report.

Protesters from Biofuelwatch and Food Not Fuel London came together for a protest outside Newham town hall in East Ham on Saturday to raise public awareness of the planning application for the UK's first biofuel-fired power plant to be built, in Beckton. Banners and placards quoted many statistics such as the number of people going hungry because of agrofuels and the number of people who could be fed with one tank of biofuel. Over 500 signatures objecting to the plant were collected...it appears that Beckton, one of the most polluted London boroughs, is prepared to fight back.

In Manchester there was a free vegan picnic in Piccadilly gardens organised by Manchester Animal Protection and Manchester Climate Action. Food, and seedlings, were given away, and activists did some guerrilla gardening in Piccadilly gardens, the centre of Manchester which is being taken over by corporate eating establishments, outdoor television screens and concrete. Gardeners planted everything from courgettes to rosebushes! They also delivered snacks into Burger King, Starbucks and Cafe Nero, offering customers free cake (and propaganda!).

Liverpool hosted a free vegan food fair at its social centre 'Next to Nowhere'. Around 50 people attended and loads of food and information was given out.

Climate change and animal rights activists joined together in Nottingham today to give away free vegan food, plants & skipped vegetables. Passer-bys were enticed to our stall by the offers of free chips, vegan pasties and tomato plants. The next free vegan food giveaway in Nottingham is going to be on the 4th July. People then visited Fresh & Ecoworks community garden based at St Ann's allotments, where they had a tour of the gardens. Ready, Steady, Skip!, a new film and website about the joys of skipping was also launched from Nottingham to coincide with the "Days Of Climate Action" food day.

In the Charing Cross area of Glasgow a group of waiters invited passers-by to ‘Taste the waste’ and sample their free food. The menu was made up entirely out of skipped goods from supermarket bins and included such delights as: homemade vegan frequent flyer banana cake, skipped chip, rescued roast veg. and binned beans.

Across the water in the Netherlands, a group of pigs took action for a more vegan Amsterdam. They handed out vegan snacks to encourage people not to buy that ham for dinner. Customers at supermarket Albert Heijn were happy to taste the organic, vegan falafel and chocolate cake and many said they were vegetarians already. There was also a film night with organic vegan food and ideas on how to combat climate change.

The activists' call for low-carbon food is supported by two high-profile reports from the UN. The 2006 United Nations Food and Agriculture Organisation report on the impact of livestock found that livestock contributes 18% of global greenhouse gas emissions: "Livestock's contribution to environmental problems is on a massive scale. The impact is so significant that it needs to be addressed with urgency." The recently published UN International Assessment of Agricultural Science provided a sobering account of the failure of industrial farming and found that it is small-scale farmers and agro-ecological methods that provide the way forward to avert the current food crisis and deal with the effects of climate change.