Saturday August 9 is the Climate Camp Day of Mass Action, when "the climate camp will go beyond talk and culminate in a spectacular mass action to shut down Kingsnorth. Permanently!"

Campaigners intended to try and shut down the power station by land sea and air - with some success - with four main colour-coded "blocks." The Blue Block (or Great Rebel Raft Regatta) attempted to approach Kingsnorth power station by water along the River Medway. Not wanting to be outdone, the Silver Block had planned to approach from above. The Green Block meanwhile focused on making its way through the undergrowth, with the Orange Block completing the set with a children-friendly march to the main gates. 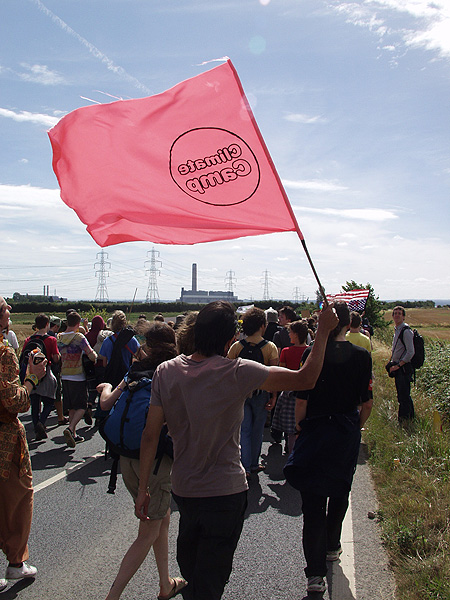 As in previous years, there have been actions targetting climate criminal throughout the camp, but this is the day when the large numbers brought together by the event coordinate their activities in order to maximise disruption.

The Blue Block promised "a futuristic flotilla of crafts of every shape and size, from recycled rafts, to viking ships, pirate punts to gondolas". The police quickly moved to ban this event ostenisbly under Section 21 of the Medway Ports Byelaws and confiscated the safety boat which was supposed to accompany the flotilla at 8am on Saturday morning.

Undeterred, 9 rafts, 11 treasure island boats, 8 kayaks and 1 currach(made in the woods the previous night) were successfully launched on the Medway to converge on the coal loading jetty. Eight kayaks got very close to the station and were detained, but not arrested. Three people did manage to reach the jetty and almost got over the fence, meanwhile other rafters dropped a banner reading "COAL: Starter Gun For Climate Chaos", on a fort opposite the power station.

One raft did break up in the river, but the campers, all wearing lifejackets, were able to clamber onto a nearby BBC media boat. Bizarrely, a number of BBC reports have subsequently claimed that 120 people had to be rescued from the Medway (see for instance this report on BBC 5 Live), presumably basing this wholly inaccurate claim on a confusingly worded statement by Kent Police which reports that "Police boats and the Medway Ports Authority Harbour Masters’ launch took 123 people out of the water," and claims, "Many of the protesters, say the officers, were very glad to be rescued."

The Green Block left the camp via a back fence, but quickly picked up a police escort. Nebertheless, once they reached the power station, cheeky protesters dismantled the first fence and used it as a ladder to climb over the second one. Happily, E.ON have decided not to emulate the repressive tactics of the Kent police and switched off the electric fence – the final fence surrounding the power station - as soon as the protesters got near it. A seperate branch of the Green Block managed to breach the first fence and hang a banner on the inside.

4 activists from the Green Bloc got in the Power Station, climbed the water inlet and shut it down; directly contradicting EOn's media statement that the actions had no effect on the running of the station.

The Orange Block left the camp shortly after 9am, with big multi-coloured dragon. There was a good atmosphere with mainstream media in attendence. The march was held up in the lane outside the main gate. Police were told that people would not arrive until 10am and would not let them move until that time. Although this march was largely chilled out with lots of singing and chanting as the sun shone, there was at least one arrest for criminal damage/resisting arrest and a brief fracas which resulted in several protesters being truncheoned by police.

Around 1,000 people marched to the gate where they held a party. There was a brief "freeze" by this group to symbolise the need to freeze economic growth. The police informed campaigners (from a helicopter) that "if you do not disperse by 1pm, dogs, force and long handed battons will be used." Most people left and returned to the camp, but a small group refused to leave as a protest in response to police threats of violence and were surrounded by riot police. Arrests were made for violation of the restrictions imposed on the march. People passively resisted arrest and several were dragged away.

Unfortunately, strong winds appear to have put paid to the plans of the Silver Block. Nevertheless, a number of actions did take place. A banner reading, "Shut Down Kingsnorth" was hung from a pylon by 4 climbers who then occupied the structure and were later arrested. A group of Christians on the Orange Block sat down near the gates to the powerstaion and prayed for forgiveness for all the damage the plant has created during its life-time and sung simple chants.