Hot on the heels of an action which switched off 500 megawatts of generating capacity at Kingsnorth power station in Kent , all flights from Stansted airport were stopped for four hours on Monday morning. Chaos and delays at the airport continued all day due to the action which saw 57 protesters arrested and dozens of flights cancelled or diverted. The action by Plane Stupid was a response to the government approving the expansion of capacity at the airport by ten million passengers a year.

Plane Stupid claim that aviation is Britain's fastest growing source of emissions, amounting to at least 13% of the UK's climate impact. With plans for new runways across the UK, including at Heathrow and Stansted, experts from the Tyndall Centre for climate research say Labour's aviation policy alone will scupper any chance the UK has of hitting its climate targets.

The protest began at 3.15am Monday morning whilst the runway was temporarily closed for maintenance work. Reopening of the runway, scheduled for 5am, was delayed while police removed the locked on protesters, causing 52 flights to be cancelled which the groups says directly prevented the release of thousands of tonnes of greenhouse gases.

Links: Why we did it, Video, Plane Stupid Website 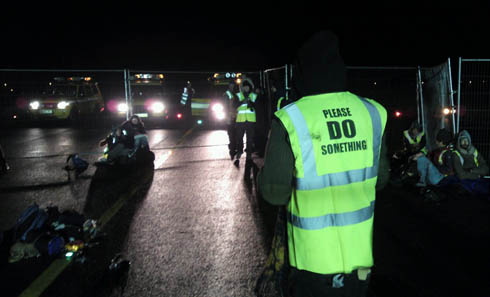 3.15am runway occupied after hole cut in security fence.

6:00am BAA have confirmed that the first flights out of the airport have been delayed.

8:10am At least 39 people have been arrested and the runway re-opened. BAA are claiming that 21 flights have been cancelled.

10:20am The Press Association reports that 57 people have been arrested, and 56 Ryanair flights cancelled.

Plane Stupid has used a variety of avenues to highlight the hypocrisy of governments in promising to both expand airports and stop climate change. The science proves that the two things are totally contradictory. The government is knowingly deceiving the public when they say they can do both. From letters, to meetings, to simple publicity stunts, to climbing on top of Parliament - Plane Stupid have tried it all to raise the climate alarm and report the crime of collusion that the government has committed with BAA. They say that if all 'official' channels fail, they are committed to using their bodies to physically stop carbon emissions.

"We face the legal consequences of our actions knowing that for this movement the Stansted action is only the beginning. The UK has to make massive cuts in carbon today, not in 50 years. Plane Stupid will be taking direct action until we see the UK taking climate change seriously." - plane stupid