On Friday 27th February around 300 campaigners from around the country, and from around the world, traveled for a loud and vibrant march and demonstration in the capital against the financial supporters of Huntingdon Life Sciences (HLS), the largest and most exposed vivisection laboratory in Europe.

With HLS’ share price now the lowest in four years, the unjust incarceration of SHAC campaigners and the latest footage of monkeys being abused inside HLS’ labs, angry, passionate and determined campaigners gathered at the Bank of England – the only bank in the world providing HLS with banking facilities. The day of action aimed to publicly show financial investors that anti-vivisectionists will not tolerate puppies being thrown around, monkeys being cut open alive and other innocent animals suffering in silence. The protest was part of a global week of action organised by Stop Huntingdon Animal Cruelty (SHAC), with actions so far reported in London (1 | 2 | 3), Somerset, Cambridge, Netherlands, Italy, Chile, Sweden, Poland, (1 | 2) France and Russia (Videos: 1 | 2).

First stop was HLS’ largest shareholder Barclays, which saw an impromptu banner drop from the bridge directly above the bank. Activists then moved onto more HLS and NYSE Euronext shareholders (1 | 2), the only stock exchange in the world listing the company after dropping them in 2000 and postponing their listing in 2005. Huntingdon are currently $83 million dollars in debt, without a commercial bank or insurance company in the world prepared to deal with them. 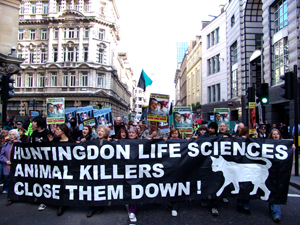 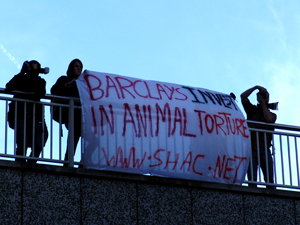 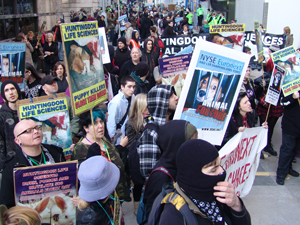