HLS Exposed - Yet Again! SHAC To Shakedown Financial Investors In The City

For the seventh time in ten years Huntingdon Life Sciences have been infiltrated and exposed, revealing shocking cruelty and footage of animal experiments filmed inside HLS during 2007 and 2008. The investigation exposes the primate trade across three continents, including individuals captured in the wild and shipped over, enduring 30 hour journeys in small cages from as far as Vietnam.

An undercover worker inside a primate unit at HLS in Cambridgeshire filmed struggling monkeys strapped to chairs and forced to inhale products. Many were housed in one cubic metre cages and then taken out to be held down by workers as tubes are forced down their throats. 217 monkeys were killed in just five studies for customers including AstraZeneca, GlaxoSmithkline and the Ministry of Defence. The company are a contract testing laboratory, testing any products, on any non-human animals, for any company; pharmaceuctical, household, beauty or otherwise.

In response to the horrific footage, the imprisonment of seven SHAC campaigners for 'conspiring to blackmail' the notorious vivisection laboratory and the business' falling share price, anti-vivisectionists will be taking to the streets of London on Friday 27th February during a global week of action against HLS' financials. The SHAC City Shakedown march and protest will be for the 70,000 animals imprisoned and abused inside the labs, targeting the financial institutions who profit from and delay the companies collapse.

As the value of Europe's largest and most exposed animal testing laboratory drops by over 80% in recent months, the New York Stock Exchange now have an extra reason to again kick the abusers off the exchange. Other reasons include the labs financial problems, serious debt, animal abuse, data falsification and scientific fraud. 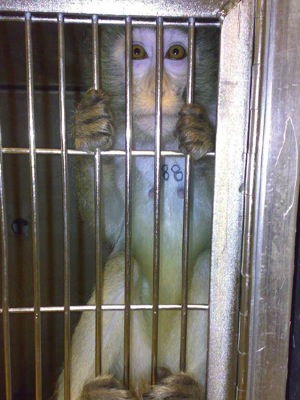 HLS' key weakness is their finances and by throwing the spotlight on those funding their abuse campaigners across the globe have managed to bring HLS to the brink of financial collapse. Throughout the campaign activists have made financial history as one by one major corporations have yielded to protester power and severed their links with the failing company.