Climate Rush activists gathered outside RBS (Royal Bank of Scotland), Thursday 5th March to protest the incredible multi million pound pay out to Fred (the shred) Goodwin, former RBS Chief Executive, and more importantly, the banks continuing role in funding the climate changing industries of coal, gas and oil. Posting the largest losses in British corporate history, RBS lost £24.1 billion in 2008 and has since had billions of pounds of taxpayers' money pumped into it. Already the largest bailout to date, the government has agreed to inject a further £13 billion on top of the £20 billion already given, and to make a further £6 billion available. While the tax payer now owns at least 70% of its shares, the bank continues to operate as a private company,

On the same day as the Climate Rush demo outside RBS, the Bank of England reduced the base interest rate to 0.5% and announced the printing of £100 billion pounds of new cash to inject into the stalled economy. Next month, the G20 leaders (G22 to be more precise) will arrive in London to discuss further ways to get the poor to bail out the rich. Various groups are mobilizing to protest against the summit which the police are co-promoting as part of a 'summer of rage'.

The G20 Meltdown group say they're going to reclaim the City, 'thrusting into the very belly of the beast', with a four pronged assault on the Bank of England at noon on 1st April. That afternoon, as part of a series of actions leading up to the COP15 climate summit in Copenhagen, the Camp for Climate Action aim to expose how the discredited market mechanisms are being sold as a solution to climate change and are planning a climate camp in the city close the the Carbon Trading Exchange. 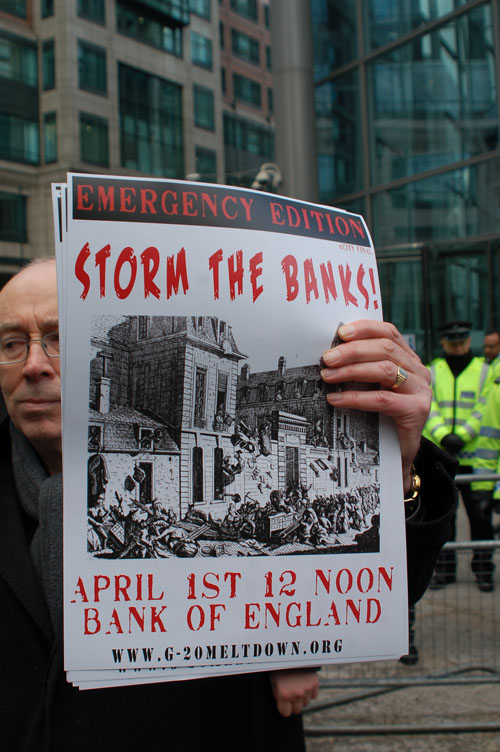 By creating a brain-bending system of carbon pollution licenses, fossil fuel companies and trading firms have found a way to keep on churning out global warming gases and to reap huge windfall profits at the same time. Meanwhile, the UK government is justifying a third runway at Heathrow and a coal-fired power station at Kingsnorth by saying that these new “carbon trading” schemes will magically make all their emissions vanish. They are handing control of our climate over to the same people and systems that caused the financial collapse. All the workable and fair alternatives aren't getting a look- in.

The Camp For Climate Action says we need to stop this foolishness. They've camped against the Heathrow runway, camped against the Kingsnorth coal power station. Now they plan to camp against the over- arching problem: absolute faith in unfettered markets and endless economic growth.

On April 1st the G20 leaders arrive in London. At a time of climate crisis their response to the market meltdown is emergency loans to car manufacturers, increased spending to encourage consumption, and bailouts for the very people who got us into this mess - just the things that will make the climate crisis worse.

The website of the newly formed G20 Meltdown group says, "Capitalism has been heating up our world for years, melting the icecaps, burning up the rainforests, pushing the planet to tipping point. Now we're going to put the heat on them. At the London Summit , the G20 ministers are trying to get away with the biggest April Fools trick of all time. Their tax-dodging, bonus-guzzling, pension-pinching, unregulated free market world's in meltdown, and those fools think we're going to bail them out. They've gotta be joking!"

G20 Meltdown has called apon the the Four Horsemen of the Apocalypse to lead their assault on the Bank Of England. Their carnival parades start at 11 a.m. from the rail stations:

"Lost your home? Lost your job? Lost your pension? This party is for you!" - g-20meltdown.org

On the 2nd of April many groups with be making their way to the Excel centre in Docklands where the summit takes place. Nearby there will be a convergence centre and counter summit taking place.

It's also worth mentioning, the huge 'Put People First' march being organised for the 28th March which Ian Bone predicts will be "bigger that the poll rax riot!"

Put People First is a coalition of development charities, trade unions, faith groups, environmentalists and other organisations, formed in response to call for a fair, sustainable route out of recession. Their platform is united by three linked calls: Decent jobs and public services for all, end poverty and inequality, build a green economy.

Meanwhile, before the G20 meet, the London Coalition Against Poverty, Disabled People’s Direct Action Network and Feminist Fightback are calling on all groups concerned with the eroding of our welfare rights to take part in a week of action against the Welfare Reform Bill, renamed by us as the Welfare Abolition Bill.

As the government has bailed out the banks and rewarded the bosses with big bonuses they have been stealthily pushing through a bill that will virtually abolish welfare for single parents and disabled people. Poor people are being made to pay for the financial crisis caused by the rich.

The bill proposes a number of Draconian changes including:

The third reading is expected near the end of March. We need to stand with those targeted to oppose the passing of this bill by taking dissent to the streets, to the government offices, to the bankers and the bosses.

A toolkit is available with more information on the bill and suggestions for action lcap.org.uk