The United Nations wildlife conference in Qatar this week, where delegates from 175 countries gathered to make decisions on the protection of recently endangered species has pulled grey clouds over the world of conservation. The CITES meeting failed to add the threatened Atlantic bluefin tuna to the Appendix I listing of the CITES legislation, which would have resulted in a ban on the international trade of the fish. In the last 50 years over 80% of the bluefin tuna population has disappeared as a result of industrial overfishing. If this incredible creature, which is also referred to as the tiger of the oceans, is not protected by some kind of international measure soon, it will soon be no more.

The Sea Shepherd Conservation Society has announced it will take aggressive action against tuna poachers in Southern Europe this summer. Their ship, the Steve Irwin, which recently returned from the anti-whaling campaign in Antarctica, is currently under way to Europe, where actions will start in May. Last year Greenpeace took action against tuna fishermen in Malta. The fishermen responded aggressively when activists attempted to board their ships. Conservation group Oceana which has been monitoring illegal fishing practices in the Mediterranean for the last few years might also return this summer.

On the newswire: Paul Watson announces aggressive campaign to clear Mediterranean of illegal fisheries | We Need to Stop Eating the Oceans | Top of the Food Chain 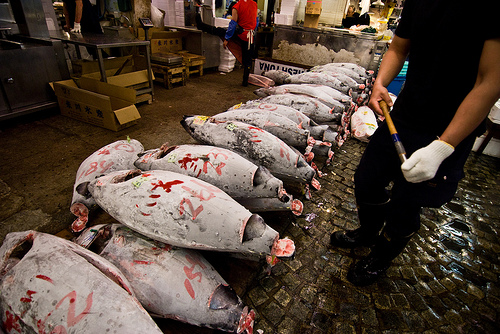 With the usual back room politics in full swing, it seems that the decision by some countries to oppose the ban, was largely influenced by the fact that the ban would have been a first for a major commercial fishery. Other fisheries with similar signs of large scale mis-management and overfishing, would have been prone to bans too, was the process not halted. It seems once more that commerce and the interests of corporate power overrides the need for adequate protection of our fragile wildlife populations and marine ecosystems.

This year the proposal by Monaco to give the bluefin tuna the highest possible status of protection was high on the agenda. Especially Japan, which consumes the vast majority of the species worldwide, was strongly opposed to the ban. The country has been buying up frozen tuna all over the world in recent years as future investment. With larger individual tuna fish fetching prices up to $250.000 at Tokyo's Tsujiki fish market, it seems the race is on to empty the oceans of this magnificently fast hunter.

The European Union, United States and Russia were in favour of the ban, but China, South Korea and a group of developing nations choose to side with Japan. Interestingly, the developing countries voting with Japan on this issue were similar to those supporting the country in recent voting rounds at the International Whaling Commission (IWC). Japan has been criticized for some year for giving favourable aid packages to countries in return for supporting votes at international institutions such as the IWC and UN.

In the Mediterranean Sea, where the tuna enter through the Strait of Gibraltar each spring, hundreds of tuna fishing boats operate daily, many of them illegally. The use of driftnets is popular even though it has been banned by a global moratorium since 1992. In the Pelagos Reserve, that lies between France, Italy and Sardinia, the nets are forming a huge threat to other wildlife, such as sperm and fin whales, common and striped dolphins and other smaller cetaceans, all of which need to surface regularly to breath. The continued use of these 'curtains of death' is the nail in the coffin for the fragile ecosystem in this once plentiful sea.

Tuna farms, where the fish are 'penned in' or 'caged' for fattening, is also severely threatening the dwindling populations of wild tuna. Even though conservation groups have pointed to the problems for over 10 years, politicians keep remarkably quiet and an increasing number of tuna farms appears along the coastlines.

CITES is an international convention that regulates hunting and trade bans of endangered species of wild flora and fauna. Notable animal species in the convention include the red panda, gorilla, the chimpanzee species, tigers and elephants. CITES is one of the few measures which authorities and enforcers can use in an effort to curb the trade in threatened animals and in fighting poachers.