Mayday! Mayday! This is May Day

With future May Days under threat, policing in the build up to this May Day has been particularly pernicious. Operations were mounted against social centres, projects and activists as the MET and other forces engaged in a series of pre-emptive arrests. In London raids took place at the Rat Star Social Centre, Offmarket Social Centre, nearby Petrosiege and The Community Project in Sipson (Grow Heathrow). The Met were also involved in raids on squats in Brighton, and Telepathic Heights in Bristol - where a police raid caused last week’s Battle of Stokes Croft - was evicted, causing further disturbances. Indymedia reported that an arrest was made in Cambridge and one in Edinburgh after groups and individuals were raided in Scotland in relation to March 26. 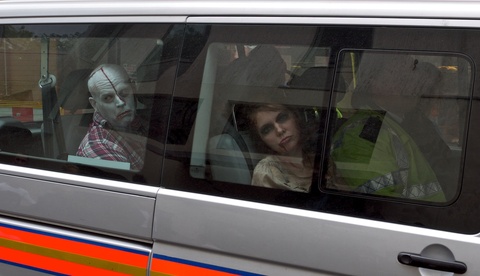 The “pre-emptive strikes” against “potential trouble makers” were justified as an attempt to limit disruption to the Royal Wedding, although it is believed that few anarchists were bothered about the event, despite reports to the contrary in the tabloid press. At least 50 political sites on facebook were deleted without warning between 28 and 29 April. Bristol anarchist bookfair and AntiCuts Space London suddenly found themselves without a facebook presence, along with such dangerous revolutionaries as Westminster Trades Council, Rochdale Law Centre, Save NHS and Tower Hamlets Greens.

Although some activists were arrested in the vicinity of the wedding, others marked the occasion by attending anti-royal events. In Sheffield, the Fargate Speaker invited people to an ‘Bollox to the Royal Wedding!’ Barbeque and about 90 people turned up.

On Saturday, hundreds of Brightonians gathered for a May Day demonstration which avoided a kettle and broke into several groups. Later on a kettle was effected outside Top Shop which, along with Vodaphone, was targeted by anti-cuts protesters. Birmingham anti-cuts protesters were forced out of the Bullring by security who are reported to have assaulted people.

Today (Sunday) Wolverhampton will mark May Day with its 17th Workers’ Day free festival and London’s Anarchist Public Assembly will start at Clerkenwell Green at 11am.

May Day on Indymedia

Meanwhile, there have been May Day happenings in indymedia uk with the mayday collective taking direct action to protect the uk indymedia site from shutdown. This collective was formed by a group of people committed to keeping the uk open publishing newswire and site up and running in the face of ongoing efforts to shut it down, sideline it and effectively expel it from the global indymedia network. 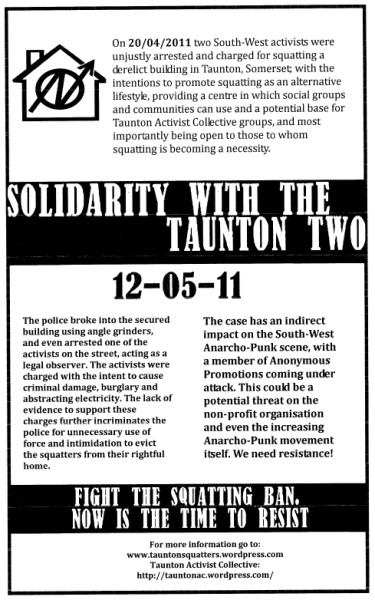 Not just Bristol, Brighton & London but also happening in places where new social centres are being set up. Charges are similar to others 'abstracting electricity' as well as burglary. For anyone local court is on May 12th:

Solidarity with the Taunton Two