Summer of Unrest: an indymedia overview of the 'riots'

The fiery unrest which ignited in Tottenham a few days ago, and which has rapidly spread through London and to other towns and cities across the country, has been largely and predictably condemned by politicians and the mainstream media as mindless violence, arson, theft and thuggery. While there is no denying that a number of the attacks have badly affected local people in local communities, some of whom have lost their homes and possessions and in one case their lives, blanket condemnation of those involved in the unrest is inappropriate and conveniently draws attention away from the context in which these events are taking place.

Britain's cities, towns and rural areas alike now boast record numbers of young unemployed people, often denied benefits, with few prospects, with many of those living in urban areas facing constant harassment by the police, especially if they happen to be black, with public services being cut all around them, and quite possibly with a growing mass awareness - thanks to movements like UK UnCut - of government support for super-rich corporations at the expense of the already impoverished. The fatal shooting of Mark Duggan and subsequent police lies might have been one trigger for the 'riots' in Haringey; another is almost certainly the decision of Haringey local authority to close the majority of the borough's youth clubs in a round of public spending cuts. In any event and whatever the triggers, the roots of the unrest are deeply embedded. No amount of repressive policing and overkill sentencing is going to solve this crisis, even if it succeeds in silencing dissent in the short term.

This feature draws together and links to eye-witness accounts and independent analysis, alternative voices offering a range of views and opinions. Read indymedia features from London, Nottingham and Bristol, opinion from SolFed, Fitwatch and individual commentators, and accounts from the streets as events have unfolded. 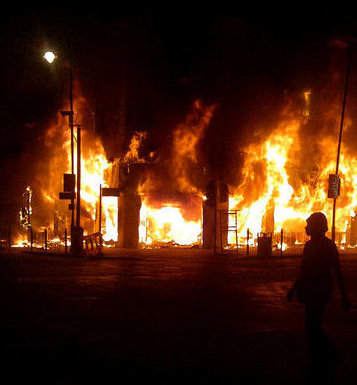 THE ROLE OF SOCIAL MEDIA

There has been much speculation and comment in the corporate media about the extent to which social networking services have been used to plan and spread word about unrest and plenty of reports about how the authorities are using social networking to identify and round up those allegedly involved. Christian Fuchs identifies social media as the latest 'moral panic' which simply diverts attention from what's really going on:

"Blaming technology or popular culture for violence... is an old and typical ideology that avoids engaging with the real societal causes of riots and unrest and promises easy solutions: policing, control of technology, surveillance. It neglects the structural causes of riots and how violence is built into contemporary societies. Focusing on technology (as cause of or solution for riots) is the ideological search for control, simplicity and predictability in a situation of high complexity, unpredictability and uncertainty. It is also an expression of fear."

Independent eye-witness accounts give some insight beyond the predictable mainstream corporate media responses and those of warmongering politicians like Tottenham MP David Lammy, apparently unaware of the irony of calling for calm and condemning violence in Britain having strongly supported the war in Iraq and the ongoing 'War on Terror'. The recent unrest here pales to insignificance beside Lammy and his ilk's brand of violence, which has led to millions of deaths, physical injuries and psychological traumas, birth defects, destroyed homes, displaced families and widescale destruction of infrastructure, not to mention the corporate looting of resources.

Here's a selection of recent posts to indymedia newswires by eyewitnesses:

In a report from the Edmonton 'riot' on Monday, a Fitwatcher noted that most of the anger was targeted against corporate targets such as Tesco's and Carphone warehouse and the police, who reportedly were struggling to contain the situation. The Fitwatcher also noted that a young black man who was there monitoring policing of the disturbances was arrested and beaten up in the back of the van, going on to point out that:

"If this is a typical example of how the police treat local black and working class youths – and there is every reason to think that it is – then it isn’t difficult to understand the anger and rage that exists."

Eye-witnesses in Birmingham and Holloway

An eyewitness at the Birmingham incident on Tuesday night noted that the crowd was mixed, that police were struggling to contain the situation, and that people in the crowd and some cops were hostile to people with cameras. Here a number of corporate stores were targeted as well.

An eyewitness to events in Holloway in the early hours of Monday morning also experienced police resistance to being filmed or photographed and, although well aware of his rights, opted to delete a photo from his phone rather than risk arrest and a night in the nick.

Pennie Quinton reported on the situation in Hackney on Tuesday, commenting on the "extraordinary lack of awareness that working class youth in Britain are being punished for the financial excesses of the banking collapse." She met young people sick of repeated stop and searches by the cops, bored and angry during a summer when public spending cuts have closed youth summer schemes, "intent on fighting the police" and "smashing and grabbing the things society tells them to want."

An anarchist take on events in Brixton

"Smashing windows in Brixton is probably a surer road to prosperity for most people than any of the more respectable paths already explored.The guy who showed up today to fix the smashed windows on Brixton Road may live just down the street from the shattered glass lying on the pavement; it's unlikely that he's a currency speculator or a hedge fund manager on the side. Any money he makes from fixing the windows will be mostly spent back in the local community."

This report attempts to balance the mainstream media reports of violence and hatred with an account of the festive atmosphere during the looting:

"They're not people who are used to winning very often. The chance to haul away several hundred thousand pounds worth of electronics, right under the helpless noses of the police who routinely harass, beat, and kill them, made it a great night."

After a couple of critical comments from readers, the author added this analysis:

"As I said at the end of the article, the fact that people are running around burning things down isn't a positive thing. I'd much rather live in a society where this sort of thing doesn't happen... Right now, though, it's unclear to me what the formal political options are for people who live on housing estates in places like Brixton... You're young, excluded, and you've got no future. The horrifying dead-end factory jobs that you might have had 40 years ago have been exported by Thatcher, Major, Blair, Brown, and Cameron. The government is rapidly passing legislation which shrinks your options... The number of young people who fall into this category is clearly not small - and for better or worse, they now understand that they can take control of large sections of the UK's major cities at any time. They have no articulate spokespeople, no Cambridge-educated wing of intellectuals who can explain them to the world. I don't have many answers, I'm just saying that the situation is far more complex than the drumbeat of fear and contempt pouring out of the corporate media would suggest."


Unfortunately from Sky News, but worth watching: