Campaigners in the UK and Sweden have taken various actions against G4S over the last month. Meanwhile, various discussions and meetings are taking place to coordinate efforts aimed at forcing the multinational security giant to halt its “unlawful and criminal activities”, as well as to put pressure on public authorities to withdraw from and not award new contracts to the notorious company.

Links: Corporate Watch | No to G4S 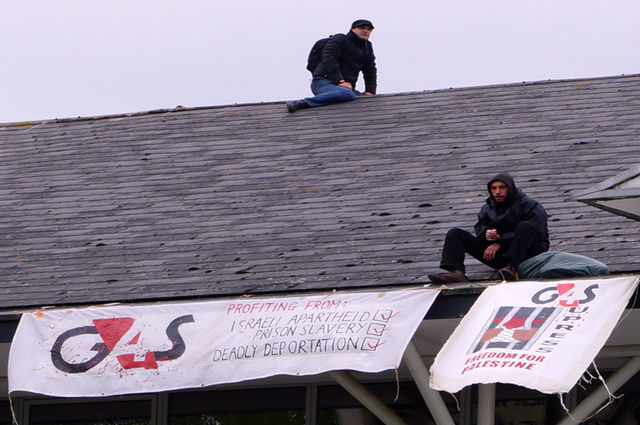 G4S provides services to the Israeli Prison Service, both in the occupied West Bank and in 1948 Israel, where Palestinian political prisoners from the Occupied Palestinian Territories are transferred in violation of the Geneva Conventions. Torture, child detention and imprisonment without trial are widespread.

In the UK, G4S runs six private prisons at which 400 prisoners are made to work 40 hours a week for as little as £2 a day. The company also runs three immigration detention centres, where detainees have made repeated claims of abuse and assault by G4S guards. It is also a provider of controversial workfare schemes, and is taking over more and more public services, including policing, housing and healthcare provision. For more information about the company, see Corporate Watch's G4S company profile.

On the 6th June 2012, over 70 activists, some dressed in prison uniform, staged a protest outside the G4S annual general meeting at the London Stock Exchange. Protesters handed the company's shareholders attending the meeting an ”alternative annual report”, based on Corporate Watch's research, which detailed the company's involvement in human rights abuses around the world. Elsewhere, G4S advertising hoardings were subvertised by activists. One bus stop subvertisement read “G4S Proudly Securing Israeli Apartheid”.

On 19th June, over 100 participants in the Stockholm No Borders Camp held a demonstration against the award of public contracts to G4S and blockaded a G4S depot.

On 2nd July, campaigners from the Boycott Israel Network and No Borders UK occupied the roof of the G4S HQ in Crawley, West Sussex. Two banners were hung from the edge of the building (photos). One read “G4S – Profiting from: Israeli Apartheid, Prison Slavery, Deadly Deportations”. Another dozen protesters gathered on the ground, holding placards in support of the Palestinian hunger strikers, who have called for action against G4S. A previous demonstration had been held at the G4S HQ in Crawley in May.

The two rooftop occupiers demanded to speak to the company's management to tell them why they were there. The G4S Area Manager, Mike Milligan, tried to appear friendly and 'understanding' but said the company was “not willing to talk to them at the moment”. Then the Head of Media Relations, Adam Mynott, came out onto the smoking balcony round the back and did a rather poor job of 'engaging' with the protesters.

The protesters expressed their concerns over the company's unlawful contracts with the Israeli prison service. Mynott pointed to a 2010 report by Hjalte Rasmussen, an 'expert' hired by G4S itself to examine the lawfulness of the company's contracts in Israel and the Occupied Palestinian Territories. The activists countered that the report had been roundly discredited (see the Palestine section of Corporate Watch's G4S company profile). Concerns were also raised about the “dangerous” restraint techniques – as described by parliament and the Home Office itself – used by G4S security guards against migrants in detention and during forcible deportation, which allegedly lead to the death of Jimmy Mubenga in October 2010 (see the Immigration section of Corporate Watch's G4S company profile). They asked whether these techniques have been reviewed by the company since then and whether the same techniques will be used by the privitised police forces.

Mr Mynott, previously a BBC foreign correspondent, had little to say apart from some poorly prepared soundbites and the repeated “I'm not aware of this” and “I don't know”. The two rooftop occupiers were arrested on suspicion of aggravated trespass and were released on bail later that night.

One of the bail conditions is “not to enter any land or building associated with G4S anywhere within the United Kingdom,” which, given the rapid expansion of the G4S empire, may include a big proportion of the country, from prisons, hospitals and schools to banks and other private and public facilities where G4S provides security, including the venues of the London Olympics.

Activists in Birmingham plan to picket a West Midlands Police Authority meeting on 12th July. G4S is bidding for a £1.5bn contract to take over Police services in the West Midlands and Surrey.