CWO2 Denise Barnes, who made the decision to remove Manning's underwear at Quantico Brig, took the witness stand in Bradley Manning's unlawful pretrial punishment hearing on Friday 7 December (see Tweets below and reports from Kevin Gosztola [ 1 | 2 ]. This is the last day of the second week of the hearing, unlike the first week when the court sat on Saturday and Sunday. The hearing is scheduled to continue Monday 10 to Wednesday 12 December. Defence has not yet finished cross examining Barnes. 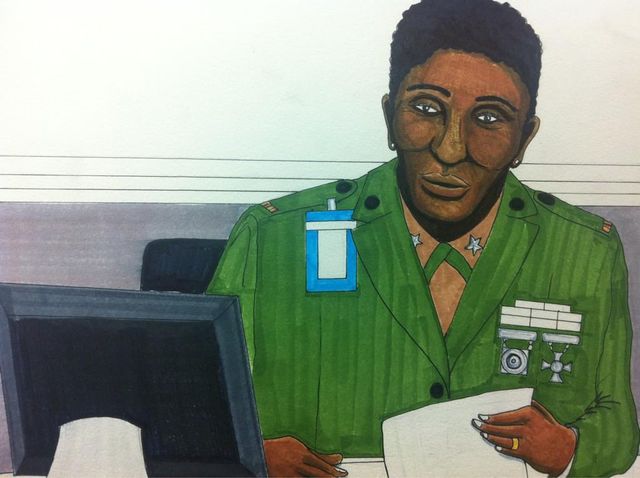 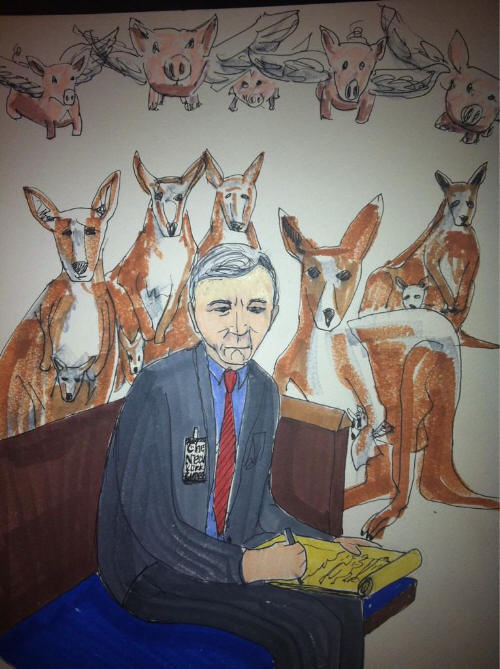 "Pigs will fly before Bill Keller/NYT attends this kangaroo court"

JR: Headed to Ft. Meade for Day 9 of Manning torture hearing. Hope Barnes is a better witness than her predecessor CWO4 Averhart.

JR: If a hearing occurs in military court and no one's around to hear it (and there are no transcripts of it), did it really happen?

KG: Or, if a hearing occurs in military court & @NYTimes is not there to cover, does it really matter?

A Washington Post researcher was present in the press pool yesterday.

AS: The @nytimes is a disgrace. OJ trial was live on TV. You can only see Bradley Manning at Ft. Meade.

From 2 Mar 2011 (till he left Quantico) Manning was stripped of all clothing at night. CWO2 Barnes said she intended to do indefinitely.

'Despite my low score, the DBS overrode the score...' More info

When Manning testified he spoke very highly of his current command, who visited him regularly at Quantico.

NF: An angle not many are covering in depth -- @ReallyMikeMcKee: Military Knew Quantico Inadequate to House PFC Manning

KG: CWO4 James Averhart also testified (as Col. Choike did) Quantico was only to hold pretrial detainees for 90-120 days max

KG: Judge Lind to CWO4 Averhart: "His history isn't going to change. It is what is."—Was ever possible for him to come off POI?

KG: CWO2 Barnes: Nothing preventing detainees talking to other prisoners but "caution all detainees not to discuss their charges"

Barnes 'U don’t have to have mental problems to kill yourself. Prime eg..linebacker from Kansas City Chiefs killed himself & his girlfriend'

KG: CWO2 Barnes invokes Kansas City Chiefs LB during testimony: "Don't have to have mental health issue to want to kill yourself"

CWO2 Barnes has about same manner of response to questions on defense cross as MDW in general.

Talk as much as possible by justifying your own position, disregard the question.

KG: After testifying Manning needed to communicate more, CWO2 Barnes says if somebody wants to commit suicide, they're not going to tell us

Defense est. that there is no other documentation for that period (previous tweet) except from Blenis entry into brig database

Barnes ‘i know Blenis is very objective and values his integrity’ and ‘He would never blur the lines.’ (on cross by def)

Barnes admitted on stand Manning in fact told C&A board he was not suicidal despite her statement on Govt examination.

Barnes on 'addendum' to Manning C&A board notes ‘I just never seen a stand alone document like this...I don’t know where this came from.’

JR: CWO2 major contradictions: 1) Said Manning's clothes HAD been returned to him before he CHOSE to stand naked at revelry.

JR: CWO2 contrad'n #2: Underwear taken b/c "at nighttime it's dark & U couldn't C what he was doing"...all others said light ALWAYS on

JR: CWO2 contrad'n #3: "ppl were housed next 2 #Manning sometimes (so he could chat)." Averhart said same thing until Coombs impeached him.

Def to Barnes: ‘Did u ask pt blank, why did u [Manning] make this statement [always planning, never acting]?’ Answer here.

Defense is responding to each of the Govt contentions made via its witness Barnes re SECNAV regulations and interpretations.

Defense is responding on cross to each of Barnes declarative statements about Manning or her decision re MAX POI.

JR: CWO2 Barnes made it sound like there's a regular parade of inmates before the C&A Board when in fact it was very rare. Manning went 3 times

JR: CWO2 is 1st witness to say that Quantico staff & their families were receiving threatening phone calls b/c of Manning.

JR: Quantico brig commanders Barnes & Averhart each had their own magic words they wanted to hear f/ Manning-- but different f/ each other's.

NF: Barnes' 'if you're going to commit suicide, you're not going to tell us' contradicts her own reasoning for removing Manning's underwear.

Pfc. Bradley Manning seems to handle turning the microphone on and off (at the appropriate moments) at defense desk during the proceedings

Pfc. Manning has a stack of documents in front of him. He appears to be reviewing those during proceedings in the Court room.

Coombs to Barnes, 'Did you consider than Manning was more withdrawn after his underwear was taken away from him?'

Coombs to Barnes: 'Did you consider...as we go into March & April...that Manning was concerned that his words could be used against him?

Behavior cited by Barnes that was cause for her concern. Manning ‘pretending to be fishing’ in his cell.

KG: Bradley Manning was seen at one point pretending he was fishing. Guard made notation. CWO2 was concerned. Psych said don't worry

Defense reviewed Manning counseling notes with Barnes. Manning was counseled for covering his head while he was asleep.

Barnes, 'Again,detainees are not allowed to cover their head...'

I think the manner in which Barnes is answering defense questions as enlightening as content of her statements.

KG: For some weeks in Feb '11, board reviewing Manning's confinement checked "serious neurosis/psychosis" even tho psych didn't see that

Watching Barnes & Averhart answer Coomb's questions one only can imagine how they responded to Manning's questions why he was still on POI.

Especially compounded by the fact Manning was in a guard prisoner relationship. If Coombs is having this much difficulty!

KG: Coombs: When CWO2 Barnes spoke to defense, she said she had to be concerned about Manning because she couldn't retire if something happened

On cross defense asks Barnes about her previous statement to defense '...because guess what if I have a mistake on my watch….I will probably get out with no retirement' Defense adds 'Averhart could because he had retirement'

Def asks 'Why is potential mental disorders checked?' Barnes: They [guards not doctors] were referring to the gender

Defense to Barnes: Wasn't one of your concerns is that if something happened to Manning it would impact your career?

Def crossed Barnes on email where she expressed concern Manning being weaned off medication by COL Malone forensic psych.

KG: Denise Barnes to Col. Oltman in email 23 Feb 2011 where she expressed concern about Brad being taken off Zoloft [antidepressant] - "I am looking at someone who is not an out-patient who is in the friggin Brig, so that alone will add to his stress/depression especially once the pace of the legal proceedings pick up. It will only get worse once the true weight of his legal situation/future hits him. Id."

Someone hand me cyanide. I cannot listen to this witness talk around defense questions any longer.

Based on Barnes testimony on cross, I've determined she is 'uncommunicative' & should be put in MAX POI indefinitely.

KG: CWO2 Barnes didn't put on Suicide Risk because if psych ordered taken off then she could no longer take Bradley Manning's underwear

Barnes email 2 Oltman 'I'm looking at someone who's not in outpatient…in the friggin brig.." (re psych removing Manning fr meds)

Def to Barnes 'Did you ask COL Malone [psych] about this issue?' (re medication, instead of or after emailing Oltman)

Def to Barnes 'So if charge sheet doesn't change and he faces potentially lengthy sentences, that box will always be checked?'

KG: CWO2 Barnes said if Bradley Manning thought conditions that harsh "could've gone above my ahead. Welcome anybody to come by"

Def: Do you remember, LTC Russell [psych] telling you 'Manning feels that whatever he says gets distorted or blown out of proportion'?

Defense picking away at Quantico obscurification.

JR: Barnes: "If I C no 'positive change' f/ Manning, he doesn't get his underwear back." She wasn't concern abt suicide, but abt punishing him.

Defense asks if you found out Manning was order to stand naked what you consider that? Barnes: 'that to me would be deviant behavior'

Def established C&A board and Blenis in particular never considered lowering Manning status based on how they filled out form.

Barnes: ...someone sitting in front of you all day watching you is unsettling.

Barnes: If you like to intellectualize things, please find a different way to do that, b/c it does not make me feel comfortable.

Defense replies citing those and says, "Well he did filed a Article 138 complaint?"

My demonstrative characterization of this witness is unavoidable. Complete obscurification & denial. (CWO2 Barnes covers her ass)

JR: Why isn't Barnes being court martialed? She defied SECNAV reg, even AFTER its proponent (Wright) called her on it. Kept Manning's underwear

At one point on Barnes back tracked on saying that Manning 'gender issue' was factor in MAX POI.

JR: Short Barnes: Can't take clothing f/ inmate unless on "Suicide Risk." Manning was only in POI--which unlike SR--can go on indefinitely.

Court in recess. Barnes is not done. Back again Monday.

AS: CW2 Denise Barnes is testifying about why she took away Bradley Manning's "panties" despite the fact that Brad always complimented her hair.

AS: Scott Shane from @nytimes is in attendance at Bradley Manning's Pretrial Punishment Motion Hearing today. #opNYT was a success.

AS: @scottshanenyt doesn't realize it yet but he is about to have his portrait drawn.

AS: The @nytimes reporter @scottshanenyt left during lunch recess. LAME!

AS: @scottshanenyt lied about trying to get media credentials, and he left hearing during lunch recess. @nytimes I'm gonna step up the trolling.

AS: Congrats to @scottshanenyt for making a 3 hour appearance after 50 weeks of @nytimes absence from Manning's hearings. Disingenuous at best.

AS: Hey @ScottShaneNYT Show up to Ft. Meade between 8 - 8:30 am and you will be credentialed to cover Bradley Manning's pretrial motion hearing.

The NYT journo missed the larger part of the defence's cross examination of Barnes (he left at lunchtime), so it's hardly surprising that the four paragraphs on Barnes' evidence don't accurately reflect what went on in the courtroom yesterday, namely the deconstruction of Barnes' position. See tweets above for a flavour of what really happened and this article by Kevin Gosztola who didn't go home at lunchtime. The NYT article concludes with speculation on possible plea negotiations, commenting that Brad's "cooperation in any future prosecution against WikiLeaks could conceivably be part of a deal". In your dreams, NYT.

8 Dec: What the New York Times Missed in its First Article on Manning's Torture

8 Dec: The New York Times finally shows up to cover Bradley Manning proceedings (and their story is sloppy)

NYT EXAMINER ON (LACK OF) COVERAGE IN NYT