The trial in the Court Martial of Welsh-American WikiLeaks Whistleblower Bradley Manning is finally scheduled to begin on Monday 3 June 2013 at Fort Meade, Maryland, US after an unprecedented three years of pre-trial detention. The mistreatment of Bradley Manning in prison including almost a year of torture by the US authorities that was condemned by the UN Special Rapporteur on Torture has to be seen in the context of the vast, 'secret' Grand Jury conspiracy and espionage investigation into WikiLeaks and the pressure that must have been exerted on Brad in a sustained but ultimately unsuccessful attempt to persuade him to testify against Julian Assange, who the US authorities very badly want to get their hands on.

Read or listen to Bradley Manning's statement to the court (extracts below) and his chat logs to see why he felt that the information he found himself in possession of should be shared with the world and what he hoped might happen as a result of risking his life and liberty to do this.

There are 22 charges against Brad including 'Aiding the Enemy' that potentially carries the death penalty although the prosecution has said it will not seek this sentence. Brad has already pled guilty to 10 lesser charges that could themselves result in a 20 year jail term and the government has accepted his lesser plea on just one count but not on any of the other lesser charges, for which it will still bring evidence. During the final pre-trial hearing on 21 May, Judge Lind announced that portions of the trial dealing with 24 witnesses, including US Ambassadors, will be held in closed session, with redacted transcripts provided afterwards.

The US, aided and abetted by Britain, is pursuing a permanent 'War on Terror' and continues its project of creating and escalating conflict around the globe at terrible cost to human life. The significance of the anti-war actions of Bradley Manning and Julian Assange can be judged by reference to the zeal with which both are being persecuted by the US authorities and the extent to which they have been variously misrepresented, vilified, smeared, ridiculed or ignored in the mainstream media. As anti-war activists or war resisters, they deserve our support and solidarity.

Join existing or create your own solidarity actions on Saturday 1 June and throughout Brad's trial, expected to last into August unless there's an early plea deal. 1 June solidarity is currently planned for London and Cardiff. 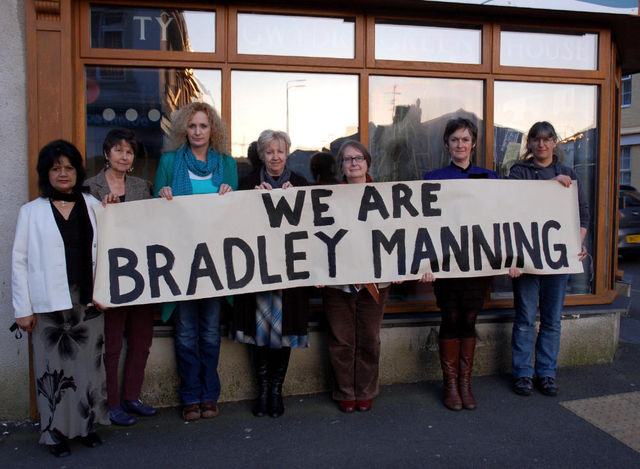 Why is it so important for us to support Bradley Manning and Julian Assange?

For an excellent summary, see this article by Linda Pearson who writes

If we do not act to defend Assange and Manning, we will be succumbing to a system which locks up those who expose war crimes, and lets war criminals walk free.

If we do not attempt to fulfill the potential for change which Manning and WikiLeaks have offered us, we will be succumbing to a world of inequality, injustice and permanent war.

The persecution of Bradley Manning, this trial, the WikiLeaks Grand Jury and the pursuit of Julian Assange are all manifestations of the fury of the US Empire at having the true nature of its wars and nefarious interference around the globe publicly exposed by WikiLeaks with information provided by Brad. As the Empire strikes back, there are potentially very serious implications for civil liberties, privacy, press freedom and protection of media sources.

The unprecedented charge dubbed wanton publication is, according to independent reporter Alexa O'Brien "intended to proscribe and chill whistleblowers and publishers empowered by the Internet's low cost, accessible means of distribution." President Obama, who declared Brad guilty over two years ago and well before Brad had himself made any statements about his actions, has prosecuted more whistleblowers under Espionage laws than all previous US Presidents combined. Those perceived as a threat to the state, including whistleblowers and internet activists, are relentlessly pursued, threatened and persecuted (witness for instance Aaron Swartz, Jeremy Hammond, John Kiriakou and Barrett Brown). No private communication between individuals is now considered sacrosanct, with the state simply 'hoovering up' all electronic communication for possible future use against us. The implications of these developments are explored by Julian Assange in his recent book Cypherpunks that advocates "privacy for the weak and transparency for the powerful."

Bradley Manning's Court Martial has been conducted under such secrecy that we only know what's been going on thanks to a handful of dedicated independent journalists who have attended every hearing, faithfully recording and publishing transcripts and accounts of the proceedings without the benefit of official court filings, records and so on. Some pre-trial hearings have been held in closed session with the public and reporters excluded. Parts of the trial will be held behind closed doors. A previous legal case brought by the Center for Constitutional Rights in May 2012 seeking access to court documents etc. ultimately failed after almost a year of proceedings and a few days ago a coalition of activists including Julian Assange filed a civil lawsuit in a last ditch attempt to lift the veil of secrecy shrouding the Court Martial.

We now know from a statement that Bradley Manning read out at one of the pre-trial hearings [authorised redacted statement | unauthorised recording] that he takes responsibility for sending WikiLeaks files and documents including the Afghan War Diary and Iraq War Logs, the Reykjavik 13 cable, Collateral Murder footage, Guantanamo Files and hundreds of thousands of diplomatic cables from US Embassies around the world.

If you want to understand Brad's motivation, read or listen to his statement. Here are a few extracts.

The CIDNE system contains a database that is used by thousands of Department of Defense (DoD) personnel, including Soldiers, civilians and contractor support. It was the U.S. Central Command (CENTCOM) reporting tool for operational reporting in Iraq and Afghanistan... I created copies of the CIDNE-I and CIDNE-A SIGACTs tables as part of the process of backing up information... I did not intend to use this information for any purpose other than for back-up. However, I later decided to release this information publicly. At that time I believed, and still believe, that these tables are two of the most significant documents of our time... represent[ing] the on-the-ground reality of both the conflicts in Iraq and Afghanistan... removing the fog of war and revealing the true nature of 21st century asymmetric warfare.

I asked [the reporter] if the Washington Post would be interested in receiving information that would have enormous value to the American public... I do not believe she took me seriously.

Next he went to the New York Times:

I called the public editor number on the New York Times website. The phone rang and was answered by a machine. I went through the menu to the section for news tips and was routed to an answering machine. I left a message stating I had access to information about Iraq and Afghanistan that I believed was very important. However, despite leaving my Skype number and a personal email address, I never received a reply from the New York Times.

Poor weather prevented Brad from calling in at the offices of political commentary blog 'Politico'. Only then did he decide to publish via WikiLeaks:

After these failed efforts, I ultimately decided to submit the materials to the WLO. I was not sure if WLO would actually publish the SIGACT tables, or, even if they did publish, I was concerned they might not be noticed by the American media. However, based on what I read about WLO... this seemed to be the best medium for publishing this information to the world within my reach.

Of the Reykjavik 13 cable:

I read the cable and quickly concluded that Iceland was essentially being bullied, diplomatically, by two larger European powers. It appeared to me that Iceland was out of viable solutions, and was now coming to the U.S. for assistance... it did not appear we were going to do anything. From my perspective, it appeared we were not getting involved due to the lack of long term geopolitical benefit to do so... I felt I might be able to right a wrong by having them [WikiLeaks] publish this document.

At first I did not consider the video very special, as I had viewed countless other "war-porn" type videos depicting combat. However, the recorded comments by the AWT crew, and the second engagement in the video, of an unarmed bongo truck, troubled me... The fact that neither CENTCOM nor Multi-National Forces - Iraq would... release the video troubled me further... The most alarming aspect of the video to me... was the seemingly delightful bloodlust they appeared to have. They dehumanized the individuals they were engaging, and seemed not to value human life... The AWT crew learns that children were in the van and, despite the injuries, the crew exhibits no remorse... Later, in a particularly disturbing manner, the AWT crew verbalizes enjoyment at the sight of one of the ground vehicles driving over the bodies...

I decided to provide the video and ROEs to them [WikiLeaks] so that Reuters would have this information before I deployed from Iraq... I wanted the American public to know that not everyone in Iraq and Afghanistan were targets that needed to be neutralized, but rather people who were struggling to live in the "pressure-cooker" environment of what we call asymmetric warfare... As I hoped, others were just as troubled, if not more troubled, than me by what they saw.

Of the Guantanamo files:

Each memorandum gave basic background information about a specific detainee held at some point by JTF-GTMO. [Guantanamo]. I have always been interested in the moral efficacy of our actions surrounding JTF-GTMO. On the one hand, I always understood the need to detain and interrogate individuals who might wish to harm the U.S. and our allies... However, the more I became educated on the topic, it seemed that we found ourselves holding an increasing number of individuals indefinitely that we believed or knew were innocent... I also recalled that in early 2009, the newly elected [NAME REDACTED] stated he would close JTF-GTMO and that the facility compromised our standing in the world and diminished our "moral authority". After familiarizing myself with the DABs [detainee assessment briefs], I agreed.

Of the US diplomatic cables:

The more I read, the more I was fascinated by the way we dealt with other nations and organizations. I also began to think that they documented back door deals and seemingly criminal activity that didn't seem characteristic of the de facto leader of the free world... I was aware that thousands of military personnel, DoD, DOS, and other civilian agencies had easy access to the cables... The more I read the cables, the more I came to the conclusion that this type of information should become public... I thought these cables were a prime example of the need for a more open diplomacy... I believed that the public release of the cables would not damage the U.S. However, I did believe the cables might be embarrassing...