WISE Up for Bradley Manning. Call-out for solidarity

This feature summarises Welsh, Irish, Scottish and English (WISE) solidarity efforts for Bradley Manning to date and is a call-out for anti-war activists and all those who believe in civil liberties and freedom of expression to take up Manning's cause and build a solidarity movement that can't be ignored.

Accused WikiLeaks whistleblower and US army intelligence analyst Bradley Manning has been held for almost a year since being arrested in Iraq after allegedly releasing confidential documents and video footage to WikiLeaks, including the Collateral Murder video, which shows unarmed civilians including two Reuters journalists being killed in an unprovoked US Apache helicopter attack in Iraq. The charges against him now include aiding the enemy which carries a possible death sentence. He was held at Quantico Marine Brig for months under conditions of torture, apparently in a so far failed effort by the US authorities to get him to deliver Julian Assange who could then be extradited to the US. Under such sustained ill treatment, there have been serious concerns for Manning's mental and physical health. Mid-April, after months of public outcry over his torture, he was moved to Fort Leavenworth in Kansas with the authorities claiming improved conditions of detention, since when Barack Obama has seen fit to declare him guilty 1 | 2. Why bother waiting for the show trial? 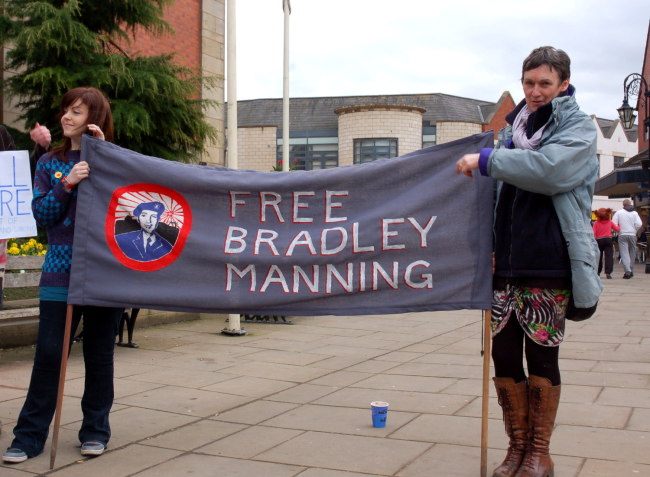 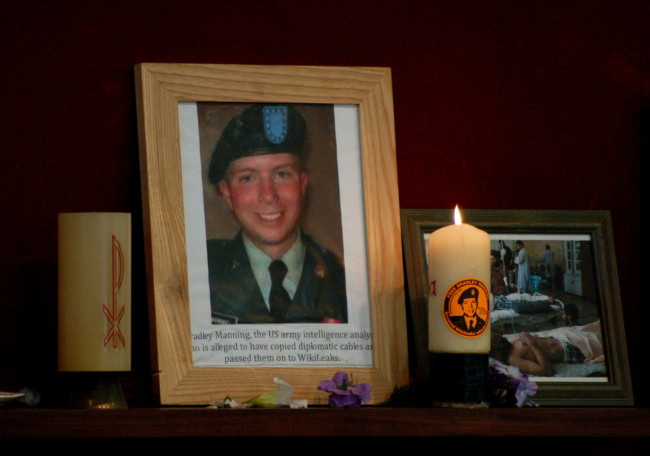 Private First Class (PFC) Bradley Manning, a US army intelligence analyst, has been in custody since May 2010 when he was arrested in Iraq on suspicion of leaking the Collateral Murder video via WikiLeaks. Manning is also suspected of releasing the Afghan War Diary, the Iraq War Logs and hundreds of thousands of previously secret diplomatic cables to and from US embassies around the world. As well as providing evidence of US war crimes, the leaked documents are shedding light on many aspects of the murky underside of diplomatic relations between the US and the rest of the world, from warnings about the safety of Japan's nuclear power plants to comments about the acquittal of the Ploughshares activists who disabled a US plane at Shannon airport in 2003, from pressure exerted by the US on Germany not to prosecute CIA agents involved in a rendition incident to revelations that the US has been spying on UN personnel, and plenty in between.

After his arrest in Iraq, Bradley Manning was held in Kuwait before being transferred to a marine jail at Quantico, Virginia, US, where he was kept in solitary confinement until moved to Fort Leavenworth army prison in Kansas mid-April. After the initial interest in the release of the Collateral Murder video had died down, Bradley Manning's name and his plight had been barely mentioned in the mainstream British media until Julian Assange hit the headlines. Manning has been even less frequently referred to by members of Britain's anti-war movement, with little solidarity or support shown for his detention and torture. The anti-war movement has been criticised for this, partly because every movement needs to support its prisoners and partly because any soldier thinking of blowing the whistle will be looking at Manning for evidence that the anti-war movement cares and will be vocal and persistent in its support. Anti-war activist Ciaron O'Reilly writes: Bradley Manning and Julian Assange have bet their lives on the assumption that if people in the countries (US, UK, Australia, Ireland, et al) prosecuting these illegal wars, invasions and occupations only KNEW the truth they would be compelled to act against, or at least discuss, the war!

Alleged whistle-blower Bradley Manning's early years were spent in Crescent, Oklahoma. It was here in 1974 that another whistle-blower, young union activist Karen Silkwood died in mysterious circumstances while driving to meet a New York Times journalist to show him a dossier of documents allegedly exposing widespread health and safety violations and serious contamination risks at the Kerr-Gee Plutonium plant. Kerr-McGee closed down its nuclear plants the following year but a subsequent civil action taken on behalf of Karen Silkwood by her surviving relatives was to become the longest civil trial in Oklahoma's history. The incident was made into a film but, as Denver Nicks explains in this article, for Crescent locals the story is more than lore. Many in Crescent know someone who worked at the plant with Karen Silkwood, and for years the town’s residents shared an association with whistleblowing and martyrdom."

After 13 years in this environment, Bradley Manning moved to Wales with his Welsh mother following the break-up of his parents' marriage and spent three years living in Pembrokeshire and attending the high school in Haverfordwest. He was 15 years old and living here when the Iraq invasion and occupation took place, and was known to have been vocal in his opposition to this war. Manning's mother and maternal family still live in the area.

What's been happening so far for Bradley Manning in Wales, Ireland, Scotland and England?

A small but growing number of activists have been working on building a network of solidarity for Bradley Manning. Actions to date include the following:

Bradley Manning supporters have had a presence at a number of major events in London, including the Student Anti-Cuts Demos and the recent London March for the Alternative 1 | 2, as well as a Shut Guantanamo event.

A rally with speakers and music was held at the US Embassy in London on 20 March, during an international weekend of action for Bradley Manning. A vigil and solidarity letter-writing event were held in Wrexham, Wales the same weekend. A vigil was recently held in Dublin, while stalls in Wrexham have highlighted Bradley Manning's situation 1 | 2.

Activists in Pembrokeshire have made contact with Bradley Manning's mother and maternal family and are offering support directly to them.

UK Friends of Bradley Manning has been campaigning via the Parliamentary route to get the government to acknowledge that Bradley Manning is a British as well as US citizen as a matter of fact on account of his Welsh-born mother, and to offer appropriate support to Bradley Manning and his family based on this fact. Welsh Labour MP Ann Clwyd, who infamously used an uncorroborated and later shown to be fabricated story about a machine used by Saddam Hussein to shred victims (whose remains were allegedly then sold for fish food) to argue forcefully both in Parliament and in the press for the invasion and occupation of Iraq and removal of Saddam, has tabled an Early Day Motion for Bradley Manning.

Activists have produced a flyer encouraging people to write letters of solidarity and support to Bradley Manning.

An email network has been set up for WISE activists to communicate with each other. As well as the original and sometimes busy WISE Up for Bradley Manning Discussion and Networking list, there is now also a low traffic announce-only WISE Up list. Feel free to join either of these to keep up to date and the first list if you want to share ideas, discuss tactics, let people know about your actions etc.

Bradley Manning and the anti-war movement

The Collateral Murder footage Bradley Manning is accused of releasing exposes war crimes committed by US soldiers in Iraq. Much of the other material leaked exposes (or confirms) the truth about the wars in Iraq and Afghanistan. Although Bradley Manning has never held a British passport, the UK authorities consider him to have British citizenship by virtue of his Welsh-born mother who still lives in Pembrokeshire. Bradley Manning was a schoolboy in Wales when the US and UK led the invasion and occupation of Iraq in 2003. He is known to have opposed the Iraq war at that time and is likely to have been influenced by the actions of anti-war groups in this country.

Hundreds of thousands of US soldiers have passed through Shannon Airport in Ireland on their way to the war zones of Iraq and Afghanistan, in flagrant disregard of Ireland's constitutional commitment to neutrality. Bradley Manning was one of those soldiers. He travelled from the US to Shannon and from there to Iraq, returning to the US in chains. Anti-war activists in Ireland have long campaigned for the demilitarisation of Shannon airport 1 | 2.

Every movement needs to support its prisoners. You can download a leaflet about why this is important from the website of Bristol Anarchist Black Cross. Bradley Manning's detention and torture are designed to act as a strong deterrent to any soldier thinking about blowing the whistle on war crimes. If the anti-war movement does nothing to counter this, if it fails to demonstrate strong support for and solidarity with Bradley Manning and others in similar situations, then we shouldn't be surprised when no one dares to speak out. First they came for the whistle-blowers...