What's up with Notts Police?

This move comes at the end of what diplomatically might be described as a "difficult" year for Nottinghamshire Police.

On the newswire: Christmas Appeal - Spare some coppers for a Copper | Another shoplifting copper caught with their trousers down | Police dog handler on trial | Demo against Notts Police & £700,000 bill for arresting 114 enviro activists | Taser Frenzy in Nottingham | Another young, black man dies in a police cell | Police spent £700.000 on climate action bust operation | Heroes of law and order 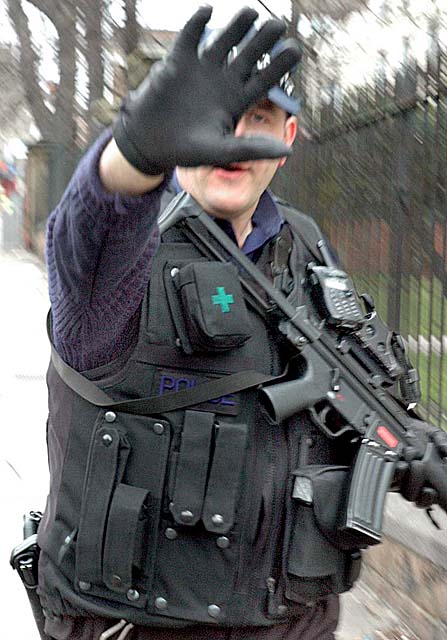 It was not always like this, under the leadership of the gloriously named Captain Athelstan Popkess, Nottinghamshire Police were a cutting edge force and became the first in the country to introduce walkie-talkies for its officers, the first to establish a forensic science laboratory and the first to use police dogs. (Popkess was also a former Black and Tan and in 1936 was photographed giving the Nazi salute in a boxing ring in Stuttgart.) Under-performance was first noted by officials eight years ago when the city was in the middle of a spate of gun violence which saw Nottingham dubbed Britain's gun capital and earning the city the nickname "Shottingham". Crime rates have fallen since then and there seems to be a consensus that things have improved since the new Chief Constable Julia Hodson, arrived 18 months ago. Nevertheless, the Powers That Be feel that crime isn't falling quickly enough, particularly in the county beyond the city boundaries.

The force's problems are underlined by the fact that the Independent Police Complaints Commission (IPCC) is currently investigating five cases involving Nottinghamshire officers.

One case is the death of Reece Staples. According to the IPCC, "Mr Staples, 19, was taken by ambulance to hospital after collapsing in a cell at Oxclose Lane police station at about 5 am on Sunday 7 June 2009, but was pronounced dead on arrival. He had been arrested just before 1.15 am in the Basford area on suspicion of causing criminal damage to a vehicle." The case raised the spectre of police racism and last week, The IPCC passed information on this case to the Crown Prosecution Service (CPS). Five officers were interviewed under an official caution and it is now up to the CPS to decide whether any criminal charges against any police officers are warranted.

Investigators are also examining video footage posted on the internet in June showing four police officers tasering and punching a man they were arresting in the city centre. This video which was given to Trent FM and then put on YouTube generated considerable negative publicity for the force.

There are also question marks about the case of Gail Hdili, stabbed by her estranged husband in front of their nine-year-old son, despite telling the police she feared for her safety only hours before.

Another officer is alleged to have punched a member of the public, while in a fifth case a suspect was run over by a police van, after he fled his vehicle, apparently during a chase.

Of course, 2009 also saw Nottinghamshire Police attract criticism for their decision to arrest 114 people in Sneinton, despite the fact that no crime had been committed. Most of those arrested were never charged. The cost of this exercise, alongside the policing of the Climate Swoop and the various events taking place when the EDL turned up in Nottingham in December, put quite a strain on the force's budget and they were vocal in their requests for assistance from the government.

Compounding the force's problems with its public image, this week, it has emerged that the jury in the inquest into the gangland murder of John and Joan Stirland are to consider if police corruption was a factor in their death. Two Notts police officers have already been convicted for corruption in a related case.

There have been any number of other instances of dodginess by local members of Her Majesty's Constabulary over the last year. In February, two in short succession saw one Notts cop accused of arresting and searching a mechanic for stealing his sunglasses from the car he was working on, before his mate found them still in the car and two Notts police arrested for stealing union funds. Then in late June the force returned to the national headlines when two police dogs died after being left in a car outside the force's Sherwood HQ on the hottest day of the year. This inglorious record was continued when, in November, Chief Inspector Kim Molloy was arrested by her colleagues after a suspected shoplifting incident at a Tescos Extra, Top Valley Drive, Top Valley. She has since been charged.

How does one become an 'elite' copper allowed to judge other coppers?

Is it done by number of prisoners beaten up, number of doughnuts eaten, or number of straight minutes they can oink without taking a breath?