Action against cuts in Nottingham

On March 8th, Nottingham City Council met to approve the 2010/11 budget. Like many council budgets this included a series of cuts to services, in this case amounting to £18.8 million. Nottingham City Unison called a lunchtime protest outside the Council House to show their opposition. Disabled campaigners blocked the tram to express their anger at the proposals.

Council plans to close Victoria Leisure Centre, which were brought forward to save money, have also faced opposition and their is growing dissent about plans to close libraries in Wilford and Beechdale.

Unison's protest coincided with the first day of a forty-eight hour national strike by members of the Public and Commercial Services Union (PCS) over attacks on their redundancy scheme. In Nottingham strikers marched from Castle Meadow to the International Community Centre (ICC) for a rally.

On the newswire: Protest against cuts at city council | PCS strike March 8/9 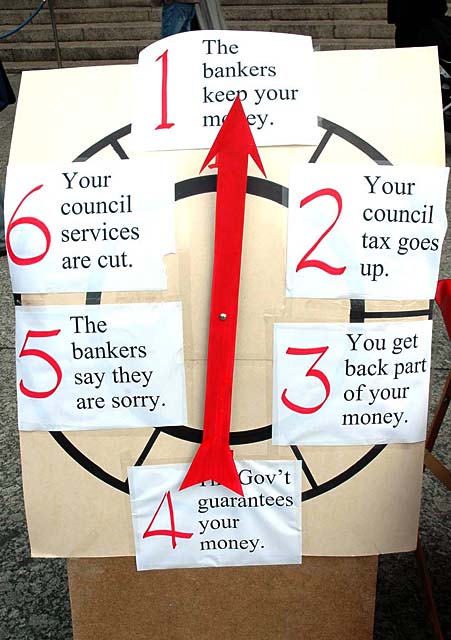 Unison express concern, as might be expected, about job cuts, but are also opposed to a number of aspects of the budget relating to social care:

According to the BBC, about 100 people turned out. This compares favourably with the turnout at a similar protest a couple of weeks ago over the river at County Hall, where even larger cuts were being voted on. Where that protest had passed off without incident, some protesters at the Council House felt compelled to move beyond official protest and a number of disabled campaigners took part in a sit-in protest, stopping the trams.

Somewhat confusingly, the BBC reports that "several people in wheelchairs blocked the tram tracks" while the Evening Post has the story as: "Deaf campaigners staged a sit-down protest and stopped trams in Nottingham city centre." The footage on BBC iPlayer suggests, although there is no commentary, that campaigners had a range of disabilities. The numerous police and PCSOs in attendance look unsure how to react.