Update 14th Nov: Protests against the attack on Fallujah continue all over the UK. Over the weekend 12th - 14 Nov there were protests in Glasgow, Brixton, and outside the BBC building in London in response to the BBC's "one-sided and misleading" reporting of the attack. A proposed picket of the Glasgow Labour Party offices has been called for Monday 15th, as well as a call to lobby those responsible for cutting off water in Iraq.
Photos from Fallujah | Interview with a Fallujah refugee

Since the war was declared over ("Mission Accomplished") the anti-war movement has been fairly quiet, but that is now changing. Protests have been occuring across the country in response to the assault on Fallujah. On Monday 8th, the day the assault started, there were protests in over 30 towns and cities around the UK, including vigils and protests in Swindon, York and Brighton.

Four people were arrested in Edinburgh as the US Consulate was spattered with blood red paint and covered in anti-war slogans. A further protest took place on Tuesday the 9th.

In Cambridge, protestors staged a rush-hour demonstration, a rally in Market Square, as well as taking to the roof of the Guildhall with banners [more pics], and spraying anti-war graffiti.

In London hundreds demonstrated outside Downing Street while others blocked roads and painted anti-war graffiti.

Protests also occured in the much publicised build up to the assault with the 'Campaign for Justice for Gordon Gentle' Protest in Glasgow on 30th October, Manchester on Sat 6th Nov, and an activist breaking into the US bomb store at Welford and chalking anti-war slogans onto the bombs on Thurs 4th.

In London several protests and action took place including road blocks and the scaling of the gates to Downing Street, as well as the Foreign Office being splatterd with blood red paint [pics]. On Sunday 7th, there was a protest at Parliament Square, following which campaigners layed flowers at the Cenotaph, before locking on and blocking Whitehall.
London reports and pics [ 10 Nov 1 2, 3 ] [ 7 Nov 1 2, 3 ] [ 6 Nov ].

In Oxford campaigners petitioned their MP, demonstrated ('Naming the Dead') on the 4th and held a Vigil on Sat 6th.

In Wrexham there have been vigils and graffiti on bridges. 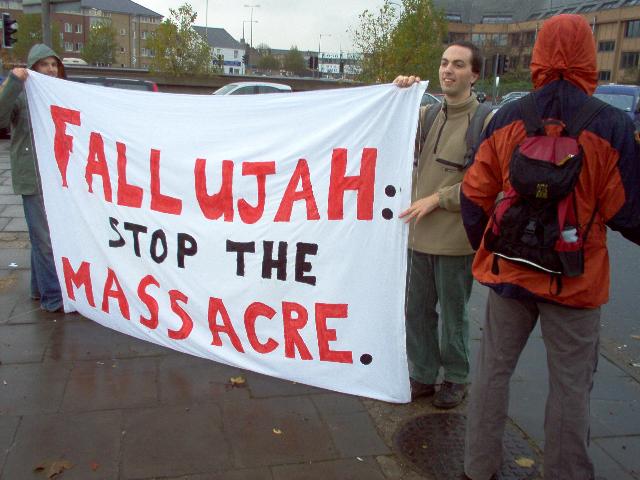 As the US marines prepare to enter Fallujah to destroy the resistance, supposedly to prepare the way for democracy, protests are already starting around the UK. Fallujah has been almost continuously attacked from the air since Thursday November the 4th, including razing a hospital. US marines now surround the city, awaiting the order of the puppet Iraqi Prime Minister Allawi to invade. A state of emergency has now been declared. The number of civilian casualties can only be guessed at. Fallujah was not included in the recent Lancet paper that estimated 100,000 as the low end of the range of estimates of Iraqi dead. (ZNet on the Lancet). The people of Fallujah have written to the UN asking it to "intervene immediately to prevent another massacre."

On Monday the 8th November the Iraqi interim Prime Minister Ayad Allawi closed Baghdad's international airport for 48 hours and the borders with Syria and Jordan, he declared a curfew in Fallujah and gave the order for U.S. and Iraqi forces began a ground assault. US and Iraqi forces then seized the general hospital, Major Kris Meyle a us marine is quoted ``There were no shots fired and no casualties'' whereas even the BBC said that 35 people had been killed there.

"Iraqis are resisting desperately for their lives and for their country and so far we in the anti-war movement have responded to their courage with deafening silence. Millions of us marched against the war on February 15th 2003, but where were those voices when US tanks rolled into Najaf? I know we tell ourselves we have this power, that when the right moment comes we will really be able to mobilise. But that moment of truth is always deferred. If we have these weapons let us use them now. It's time." (Naomi Klein, 20 Aug)