From July 15th to 17th the G8 met in Strelna, a suburb of St.Petersburg, Russia.

While the situation for protest in Russia is very different (Interview) from what it was in the UK during the G8 in Gleneagles, the Russian "Network against the G8" called for protests against the summit and invited people from around the world to come to Russia. A cycle caravan that departed from Berlin arrived at St.Petersburg well ahead of the protests [reports and photos] A Libertarian Forum also took place in Moscow from the 8 to the 12 of July as a build up event for the protests in St. Petersburg. [Reports: first and second days]

On the 14th of July there was a call for a Global Day of Action, when protests against the neo-liberal politics of the G8 took place worldwide [Summary of global protests] These included planned actions in Washington, Manchester, Berlin, Hamburg, and Manila. Environmental groups also called for an International Day of Direct Action on July 15th for climate justice, against climate change and the G8. See the protest calendar for further details.

At the same time as the G8 summit took place, protesters gathered around the Social Forum in St. Petersburg, and in a convergence centre in the Kirov stadium (with an autonomous space within it). A counter summit called Forum des Peuples was also held in Mali from 15th-17th July.

For the latest reports and updates click at the "Full article" link above, and check out IMC-Russia (multilingual) 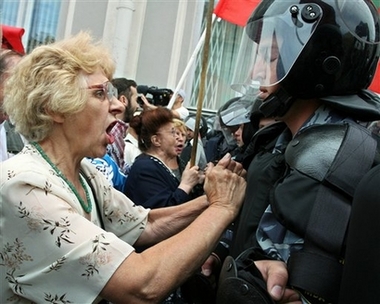 Photo Galleries of the demonstrations, actions and repression in St. Petersburg: 1 | 2.
Read personal accounts 1 | 2 | 3 by a British activist in St Petersburg.

• Tuesday 18th: All of the British and Welsh activists who were arrested in St Petersburg were freed late last night. Some of the other protesters still in police custody are also being released, specially those that took part in Sunday's blockade, but some still remain in police cells. There are reports coming out of people having been left without food or water for days whilst in detention, and at least one case of a young woman threatened with rape inside the police station. Read a first hand report from an activist that was arrested, and a prsonal account of an activist from Warsaw detained during the street blockade on Nevskiy Prospect. Update on the prisonners situation as for today.

Rising Tide North America has published today a chronicle of global actions against the 2006 G8 Summit. A press conference "Violations of human rights during G8 summit in Saint Petersburg" has been announced for tomorrow Wednesday 19th. And the G8 2006 Info and Press Group informs that the dates for next year's G8 Summit have been anounced for Wednesday 6 - Friday 8 June 2007.

• Monday 17th: The G8 2006 Info and Press Group reports that the Russian authorities are targeting journalists that are trying to report the anti G8 protests. Yesterday they arrested accredited Associated Press reporters for covering a protest. They also attacked photographers, broke cameras and arrested six Ukrainian activists for holding a press conference. Also today a court ruling sentenced some of the activists who took part in yesterday's street blockade next to the Primoskaya hotel to a few days imprisonment. The other activists are still waiting for the ruling, having been in police custody for more than 36 hours already. Read a list of Law violations during the 5 days of repression around the G8 summit.

Calls for solidarity with the detainees in St Petersburg have also been made in London for Friday 21st: Demo outside London's Russian Embassy, and in Strausbourg (Fr) for today.

• Sunday 16th: In the early morning around 30 people who are involved in the Network Against G8 (NAG8) blockaded the entrance of a hotel in St. Petersburg which hosts delegates of the G8 summit [Reports 1 | 2 | Pics | Videos 1 and 2 | 3 | Press Release] Almost everyone participating in this action have been brutally arrested, which included at least four Welsh activists. The traditional anti-war picket in Saint Petersburg against the war in Chechnya, which is held every Sunday for the last 6 years, has also been broken up by police. Later in the day a Pink-Silver-Clown action took place in the Vassilievsky Island with around 100 participants, where another 30 mostly Russian activists were arrested [Report | Video]

A total of 50 people have been arrested in today's actions. More than 30 were arrested in the morning blockade [Update from the Medics team | Prisonners fund raising appeal] whilst some of the people arrested in yesterday's actions have been brought to court today. Many of these are international activists, which have not given access to legal or consular representation in police stations Some were tried last night in a closed court. Anna Williams, a British medic in St Petersburg said:
“The human rights situation here is dire. People are being badly beaten in jails and police have been denying detainees food and water".

A solidarity demonstration with around 300 people organised by anti-capitalist and anti-fasicsts groups took place in Berlin this afternoon [Pics]. The demo ended with a rally outside the Russian Embassy.

• Saturday 15th: The G8 Summit opened today whilst almost all street protests in the city have been outlawed, effectively prevented by the police or broken by force [Reports 1 | 2] Participants of the Russian Social Forum, which was ended today in St.Petersburg, have not been allowed to march to the city centre, although they asked for permission several weeks ago. Police has blocked them at the Kirov stadium, where the forum was held, and prevented them from leaving. As a result, about 150 activists held a rally behind closed gates, facing lines of riot police, which outnumbered the activists. [Video | Report | Photos: 1 and 2] A Communist demonstration has been allowed to take place, but it has ended with further arrests when it was attacked by police [Video]

In London, the two activists arrested at the anti-G8 action on friday, have now been released, one on bail, but the other had the charges dropped. The Berlin-based G8 2006 Info and Press Group has issued a press release about the Global Day of Action Against G8 and Repression. And in Madrid, activists from 'Global Action' group staged a symbolic hanging of the G8 today.

In Gao (Mali) the fifth edition of the People's Forum has started today as a counterweight to the G8 summit in St Petersburg. Several hundred people from NGOs and other initiatives meet for three days to raise awareness about the problems faced by poor people in sub-Saharan Africa [Photos 1 | 2 | 3]

• Friday 14th: Solidarity demonstrations are taking place today following the call for a Global Day of Action against the neo-liiberal policies of the G8. In Berlin, around 70 pople took part in a spontaneously organised demonstration outside the Russian embassy, in a show of solidarity with the protests in St. Petersburg and against repression. [Report | Pics 1 | 2] London also saw a solidarity action [report and pics] when a group of protesters occupied and dropped banners against the G8 at the Russian Chamber of Commerce in Southwark. First updates talked about up to for people were arrested when police quickly moved in, but later reports confirmed two arrests. London Raising Ride also targeted Drax power station's PR firm following the call for solidarity actions. The IMC-London Film Festival continues tonight at the RampArt Social Centre, where the latest footage from Russia can be seen. Cardiff also saw street actions and graffiti in solidarity with the protests in Russia. For a few hours the city centre had access to free vegi burgers and information about the G8 and its role in creating and sustaining poverty. An solidarity protest bicycle carnival also took place in Manchester. In Kiew the group "The world is not a commodity" did a street performance [Report and Pics]

Protests in front of Russian embassies have also taken place in The Hague (NL) and in Germany there have been actions in Bonn, Frankfurt/Main, Hamburg, Traunstein and L�neburg (Pics and Reports in German)

Also read an update from St. Petersburg by a British activist, and manifestos by Attac Berlin 'Global Social Rights Worldwide! Sink the G8!', and the Anarchist Federation in London 'Stop the G8! Stop Repression!', and a statement from international activists in St. Petersburg.

• Thursday 13th: The Social Forum in St Petersburg is the focus of police surveillance and intimidation today. Police are taking photos of those attending, and there are reports that microphones have been planted in and around Kirov Stadion, where the forum takes place. Mainly foreign activists seem to have been the target of police operations today. Read update from St. Petersburg.

Away from Russia protests have also started to take place. On the Baltic coast in north-eastern Germany, around 1,500 people demonstrated against German Chancellor Angela Merkel and US President Bush's meeting ahead of the summit in Stralsund. In Gothenburg (Sweden) activists from the Swedish Anarchosyndicalist Youth Federation staged a solidarity action outside the Russian consulate [Report and Pics] In Bristol (UK) a banner was hung on a bridge that read: "Geldof lied: Live Aid changed nothing! Bristol Solidarity with the Moscow G8 Crashers!".

• Wednesday 12th: Update on repression in the run-up to the G8 summit [more] and urgent appeal for solidarity: the legal team reports 100 activists detained in Russia . One suspected disappeared. Read declaration by the Legal team.

• Monday 10th: Summaries one and two of arrests and repression in different cities.

• Weekend 8-9th: Seven people have already been arrested by Russian police on "suspicion of being against the policies of the G8 summit". Reports: 1 | 2. A Libertarian Forum has started in Moscow until the 12 of July as a build up event for the protests in St. Petersburg. Read reports of the first and second days.

• Well before the mobilisations against this year's G8 summit begin, the Russian authorities have already started to show their intolerance against most forms of street protests. In May a gay and lesbian demo was heavily repressed by police, whilst the activists of the Network Against G8 have increasingly been under surveillance and harassed.