War in the Middle East While the World is Watching

For the 12th day in a row, Israeli forces have been bombarding Lebanon, while more Israeli troops are moving into southern parts of the country. So far more than 400 Lebanese civilians have been killed, over 1,000 wounded and some 500,000 displaced, compared with 36 Israeli deaths (17 civilians) caused by Hizbullah's Katyusha rockets fired at northern Israeli cities and towns. Reports from Beirut talk of a deserted, devastated city, with residential buildings, roads and bridges being hit by Israeli air strikes [click the Full Article link for details].

Meanwhile in Palestine, Israeli attacks on the Gaza Strip continue. Tens of Palestinian civilians have been killed and many more injured, not to mention the periodic shortages of food, fuel, electricity, water and medicine. Many of those killed were Palestinian civilians, including children, who died during Israeli air force "targeted killings". As well as actual bombing raids, Israeli military airplanes have conducted nightly sonic booming raids over Gaza, with the aim of making the civilian population fearful that actual bombing is under way. In retaliation, Palestinian groups also continue to fire Qassam rockets at Israeli towns [see Human Rights Watch's statement].

Apart from the mass destruction of civilian infrastructure, there are reports that Israeli forces have been using internationally banned weapons, such as phosphorus incendiary bombs and vacuum bombs, both in Gaza and in Lebanon.

Although still small in scale, there have been a few protests against the continuing Israeli attacks on Lebanon and Gaza throughout the world. On 18 June, several hundred people demonstrated in Parliament Square in London. National-wide demonstrations have been called for July 22nd by the Palestine Solidarity Campaign, Stop the War Coalition and various Muslim organisations. July 22nd is also going to be an International Day of Action Against Israeli Aggression. Earlier this month, protesters blockaded EDO MBM in Brighton, which makes electrical weapons components for the Israeli military. [see also "Boycott Israeli Goods" National Day of Action]. 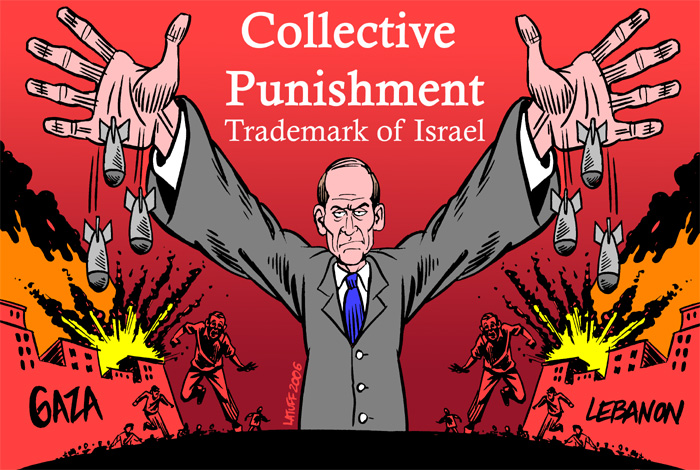 On 12 July, 2006, the Lebanese Islamic resistance movement, Hizbullah, carried out Operation Truthful Promise, named for a "promise" by its leader, Hassan Nasrallah, to capture Israeli soldiers and swap them for the remaining three Lebanese held by Israel as "war prisoners". Two Israeli soldiers were captured in the cross-border raid. The Israeli Prime Minister, Ehud Olmert, described the capture of the soldiers as "an act of war" and, soon, Israeli planes were bombing what were allegedly Hizbullah positions, while troops crossed into southern Lebanon for the first time since the Israeli withdrawal in 2000.

The Israeli response was, at first, called Operation Just Reward, but was later renamed Operation Change of Direction. This is quite significant since the captive soldiers seem to have been already deleted from the public agenda. Israeli officials are now talking not about "bringing the soldiers home" but about destroying Hizbullah and Hamas, and maybe Syria and Iran as well, "once and for all". In fact, there are 'rumours' that Israel had set its war plan more than a year before.

And this is not unheard of before at all. Only two weeks before, Israel had launched a large-scale invasion of the Gaza Strip, allegedly to free another soldier seized by Palestinian militias on 25 June. Since the capture of Corporal Shalit, Israeli air forces have killed tens of Palestinians, mostly civilians, and destroyed government buildings, bridges and the only domestic electricity plant in Gaza, which is essential to power the water system, sewage treatment and medical services in the region. It is worth mentioning that the Palestinian militias, like Hizbullah, have offered to release the captive soldier in exchange for some of the Palestinians imprisoned by Israel.