Preserving disorder: freedom to protest and the future of SOCPA

The Home Office has recently published a consultation paper which hints at what was really meant by Gordon Brown's promise to look again at the law which restricts demonstrations near parliament, far from repealing this legislation the consultation indicates that the government wants to extend the restrictions on demonstrations to cover the whole country.

The current law on demonstrations around parliament bans spontaneous protests, requiring demonstrators to seek advance police permission, which allows the police to impose arbitrary limits on numbers and effectively act as political censors. See a timeline of its effects.

A public meeting challenging the new proposal will be held at the London School of Economics on the 2nd December. 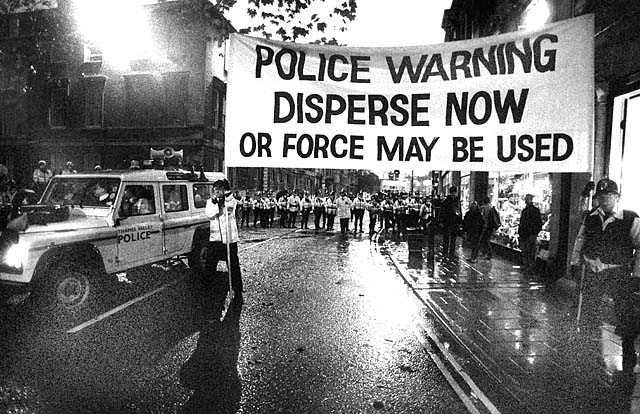 When Gordon Brown took office in June press briefings suggested that he would soon respond to criticisms of the law on demonstrations near parliament, the mainstream press lapped this up and dutifully informed readers that Brown "wants to scrap the law that forbids protests outside parliament" (The Guardian) to "allow Iraq protests" (The Times), others were understandably sceptical.

By the time Brown spoke to parliament on the 3rd of July this had already become only a vague pledge to change the law, for better or worse:

"While balancing the need for public order with the right to public dissent, I think it right - in consultation with the Metropolitan Police, Parliament, the Mayor of London, Westminster City Council and liberties groups - to change the laws that now restrict the right to demonstrate in Parliament Square."

A clearer warning of what lay ahead was buried in the grandly titled 'Governance of Britain' Green Paper, published the same day, which stated that:

"The Government will therefore consult widely on the provisions in the Serious Organised Crime and Police Act with a view to ensuring that people's right to protest is not subject to unnecessary restrictions. This review will need to reflect the security situation and allow the business of Parliament to proceed unhindered, but will be conducted with a presumption in favour of freedom of expression. In return, protesters will of course need to obey the law and relevant bylaws."

The origins of SOCPA

The law controlling demonstrations in parliament square, Sections 132-138 of the Serious Organised Crime and Police Act 2005 (SOCPA) is modelled on the powers introduced by the Public Order Act 1986 (POA), particularly Sections 11-12 which relate to all processions (e.g. marches) no matter how small, requiring organisers to give advance notice to the police and allowing a wide range of conditions to be imposed. Section 14 of the act deals with assemblies (e.g. static demonstrations and pickets) but these do not require advance notice and it allows only a limited set of conditions to be imposed. Originally conditions could only be imposed on a gathering of at least 20, but this was reduced by the Anti-social Behaviour Act 2003 to a mere two people. Exactly what constitutes an assembly is left up to the police, similarly SOCPA does not define what it means by demonstration, exemplified by its use to prosecute a Parliament Square picnicker.

The Public Order Act (POA), originally the Criminal Disorder Bill, was the culmination of six years of planning and propaganda by the Thatcher government, followed by a mere six weeks of public consultation, sold on the now familiar basis that "in establishing a new legal framework covering processions, demonstrations and assemblies, the Government wanted to ensure that the right to protest, march and picket peacefully should be regulated only to the extent required to preserve order."

The Green Paper eventually (25th October) led to the publication of a consultation document ostensibly concerned with 'Managing Protest Around Parliament' seeking the views of "campaigning non-government organisations; law enforcement agencies; and those with specific business in and around Parliament Square".

However, the first two heavily-loaded questions in the document have no relevance to Parliament Square designated area (since Section 14 of the POA does not apply there):

"Q1: The Government believes peaceful protest is a vital part of a democratic society, and that the police should have powers to manage public assemblies and processions to respond to the potential for disorder. Should the powers generally in relation to marches and assemblies be the same?"

"Q2: Do you agree that the conditions that can be imposed on assemblies and marches should be harmonised?"

As outlined above the powers on marches were already extended to assemblies near parliament by SOCPA, because of it's claimed 'special character', so now the exception will become the rule. The implication of these proposals is that any public gathering, anywhere could be criminalised at the sole discretion of any passing policeman unless it had obtained advance permission.

What the police want

The police have long regarded public protest as part of a 'spectrum of disorder' which they define as:

"Disorder includes any act that is contrary to the general public's perception of normality. Disorder has the potential adversely to affect the status quo and is almost always a predictor of future crime."

The Labour government avoids talk of 'disorder' which suggests a lack of control and prefers to refer to 'anti-social behaviour' which blames the individual, but the underlying assumptions are the same. All of their 'anti-social behaviour' laws are based on Section 5 of the POA, which criminalised 'disorderly conduct', defined at the discretion of the police, so it is no surprise that the police have applied the full range of 'anti-social behaviour' powers to protesters including dispersal zones, demanding names and addresses, injunctions (EDO | Heathrow), ASBOs, and alcohol-related crime orders.

The SOCPA law was promoted to parliament as a means to rid them of Brian Haw's Parliament Square vigil, and much of the subsequent media coverage, both mainstream and alternative, has concentrated on how it affects him and his supporters nothing in the Act itself would actually allow the police to prevent him remaining, in fact since he applied for police permission he serves as an easy example of the government's claimed tolerance of protest.

The police's desire for the SOCPA law is more clearly rooted in other more volatile events including the 'Day X' schoolkids' protests at the beginning of the 2003 Iraq invasion, and most obviously the September 2004 Countryside Alliance pro-hunting demo, which caused them much criticism, not because the tactics were exceptionally harsh - the Square was eventually cleared that evening by police who were ordered not to carry batons - but because those on the receiving end of police violence were 'respectable' people in the eyes of the press, so they felt they need for a different approach focussing more on control and less on reaction. SOCPA is explicitly referenced in the November 2006 IPCC report on that demonstration:

"Under the Serious and Organised Crime and Police Act 2005, demonstrations in Parliament Square can now only be held after obtaining a licence from the Metropolitan Police. The numbers of demonstrators will be able to be limited and should ensure that at any future demonstration in this area, the MPS will be able to erect a 'Wapping box' formation of barriers around the grassed area, and effectively control and limit the numbers of persons attending."

While much has been done by Mark Thomas and others to publicise the SOCPA restrictions in a variety of ways (1 | 2 | 3 | 4) they have faced little direct opposition or defiance, and the police have begun to act as though SOCPA already applies everywhere, for example in October 2006 demonstrators at the Mexican embassy were told they had to move on as it was an "illegal demonstration" because there was "no permission", out of 25 protesters 8 were arrested after dozens of police arriving in 24 cars and vans swarmed into the street. All 8 were acquitted at trial in May 2006. During the Spacehijackers' Suited-and-Booted Mayday event one person was arrested for refusing to follow police orders to disperse from an "illegal demonstration". They were acquitted in October. Class War's Bash the Rich, demo was again declared to be an "illegal demonstration", surrounded by police and two people were arrested for attempting to leave it - "you either march where we tell you, or you're nicked". Even those groups, like the Stop the War Coalition which habitually collaborate with police by seeking permission have faced increased restrictions, and been criticised for facilitating the criminalisation of others.

These attempts by police to extend their powers by testing what they can get away with before being given backdated authority by parliament have many parallels to event before the passing of the POA. While the excesses of Orgreave and Wapping are well known, police actions at two minor demonstrations are worth recollecting, during Thatcher's October 1984 visit to All Souls' College Oxford police attacked a student demonstration and made 30 arrests, the following March then Home Secretary Leon Brittan visited Manchester University to make a speech on law and order, the police again attacked protesting students, making 38 arrests and leaving many badly injured. Brittan denounced the demonstrators as "red fascist scum", and used these as examples of a growing problem to be 'neutralised' when presenting his Public Order White Paper (which became the POA) to parliament two months later.

The police have been emboldened to seek more power by a series of recent court decisions which have reinforced their belief that they are able regulate public gatherings entirely as they see fit. The first court challenge over SOCPA (Blum vs DPP) failed completely. The Fairford coaches judgment (Laporte vs Gloucestershire Police) widely regarded as an important victory did at the same time approve of the possibility of police turning the coaches away had the circumstances been slightly different, and this was recently used to justify the Court of Appeal's dismissal of the Mayday 2001 compensation case (Austin vs Met Police), agreeing with the High Court's previous ruling that the Oxford Circus police cordon was lawful but also adding the idea that even those not involved in any protest had a duty to go along quietly with police containment. While the police's successful appeal against Critical Mass (Met Police vs Kay) has had little affect on the rides, it does have implications for anyone organising other processions, as the first major decision on them since 1950. Another hardly publicised case (Singh vs West Midlands Police) approved police use of 'anti-social behaviour' dispersal zones against protesters.

What all of these cases, and every law restricting protests since the POA have in common is the false claim that they are a reasonable and rational response to difficult situations in which the freedom to protest has to be balanced against the protection of the 'wider community'. This assumes from the outset that what people believe constitute fundamental rights, such as political demonstration or picketing, are inherently against the interests of the wider community. It is with this assumed logic that our supposed rights are contained and suppressed, supported by the press portrayal of protesters as hooligans because as Gareth Pierce said in 1982: "The strongest weapon in the police arsenal is not CS gas or plastic bullets, the deployment of which causes some public concern, but effective control of a willing and uncritical press which causes none."