SOCPA Anti-demo Laws Should be Repealed, Not Extended

One of Gordon Brown's first announcements when he became prime minister, was that the state would 'look again' at the Serious Organised Crime and Police Act 2005 (SOCPA) clauses which affect the right to protest within a kilometer of the Houses of Parliament. Since then, a consultation has been launched by the Home Office, and the closing date for responses is 17/01/08.

Anti-SOCPA campaigners who have studied the proposal are concerned that, rather than leading to a repeal of the relevant clauses of the act, the consultation could lead to an extension of the powers, meaning that any demonstration anywhere in the country would be required to seek police authorisation in advance.

On Saturday, January 12th, in response to a callout from campaigners, demonstrations took place around the UK.

Milton Keynes and Cambridge saw demonstrations in support of the right to protest. In Liverpool civil liberties protesters marched through the town centre and held a demonstration outside the town hall. Welsh activists handed out copies of the consultation paper and held a series of mini protests with locals in Aberystwyth. The monthly peace camp at Aldermaston staged a solidarity 'Freedom of Assembly' demo outside the Atomic Weapons Establishment.

A demonstration in Oxford against a proposed new shopping centre took place in solidarity with the other anti-SOCPA actions as locals took impromptu direct action to prevent the fencing off of the square. In London, where protest is banned within a kilometre of parliament, a procession demonstrated outside several key sites with the SOCPA zone, including the Home Office, New Scotland Yard and MI5. People were arrested for lying down in the road outside Downing Street and at Parliament Square activists were violently removed from the sit in and Brian Haw was assaulted and arrested. 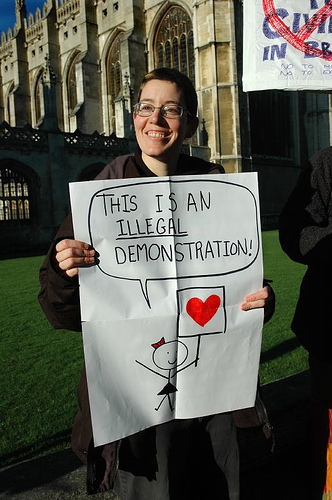 "Is there a nice guide for what it is now, and what the extension of SOCPA could be?"