Canadian Minister of Fisheries and Oceans Loyola Hearn has decided to charge the Captain and 1st Officer of the Sea Shepherd ship Farley Mowat with the "crime" of approaching too close to a seal slaughter without permission from the Minister.

The Sea Shepherd argues that their vessel has "right of free passage" through the waters they have been navigating in: "The problem for Hearn is that the Farley Mowat is a Dutch registered yacht not engaged in economic activity navigating with the right of free passage as allowed by International Maritime law in waters beyond 12 miles of Canada. .. If the Canadian government forcefully boards a Dutch registered ship in international waters that will not be looked on very kindly in Europe. If they actually arrest two Europeans for the "crime" of documenting a seal being skinned alive, that will not play very well in Amsterdam, Stockholm or London or Paris." 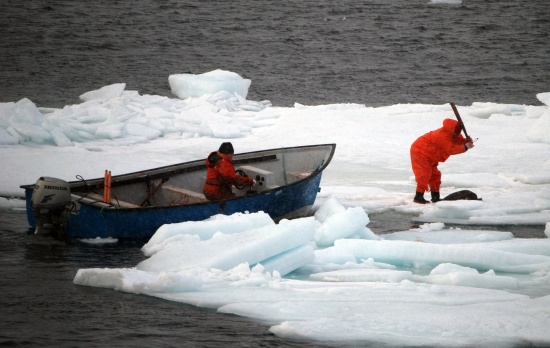 The Sea Shepherd has been documenting the Canadian seal hunt off the coast of Newfoundland since the middle of March. On the 30th March, the Canadian Coast Guard rammed teh Sea Shepherd ship twice, in an attempt to keep it away from the scene of the seal hunt. On 5th April, the ship (Farley Mowat) was attacked by a mob of 30-40 angry seal hunters. The attack took place while anchored in the French islands of St. Pierre and Miquelon. The Farley Mowat was berthed in St. Pierre to transfer video footage of the Canadian seal slaughter onto shore and await the resumption of the slaughter, which was temporarily suspended after the death of four sealers.