This week it was announced Barclays and four other large investors dropped all shares in Huntingdon Life Sciences (HLS), Europe's largest and most exposed vivisection laboratory. LSR stock owned by institutional shareholders has now fallen to 12%, placing HLS $4 million below the NYSE minimum listing standard for market value (the only stock exchange listing the company, a major target in the campaign to close HLS).

Following a legal challenge against the CEO's proposal to purchase all of the outstanding LSR stock, an intense global campaign and recent repression against SHAC in Birmingham, a total of 797,284 shares have now been sold. Barclays Global Investors, Barclays Plc, Hartford Investment Management Company, Rice Hall James and Associates LLC, Bank of New York Mellon and Wells Fargo sold all their shares, of which over 400,000 were held by previously largest shareholder Barclays. 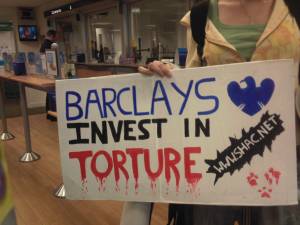 HLS are currently £72 million in debt, with their 1st quarter revenue for 2009 down 24% from 2008, causing managing director Brain Cass this year to admit "...the outlook remains uncertain". SHAC called for supporters to "...make sure it stays that way and smash HLS for good!"

Highbridge Capital sell most of their shares

Highbridge Capital sells most of their shares and will be disposing of the remainder soon.

Since our email alert on Friday 15th May and peaceful protests in New York over the weekend about a new second largest institutional shareholder - Highbridge Capital who owned 187,597 shares in LSR stock.

Highbridge Capital have been in contact with SHAC and have shown us their brokage account details to show that they have now sold over 90% of their shares in HLS (LSR) and are hoping to dispose of the remainder very soon. They presently hold 21,900 shares.

We have stated that we will hold off on protests and further emails as Highbridge Capital have been open with their dialogue and genuine. So, unless there is a delay in the sale of their shares we ask for campaigners to concentrate on other larger shareholders and also support next week's Mad Science May - Week of Action:

Thanks to all campaigners that have protested, emailed and contacted companies over their investments.

Don't forget that HLS are £72 million in debt, their 1st quarter revenue for 2009 is down 24% from 2008
"revenue levels are down from last year and the outlook remains uncertain" - Brain Cass
Lets make sure it stays that way and smash HLS for good!

If you are not near a shareholder, there are plenty of other targets to pile on the pressure and demo to help close HLS!

Keep up the pressure, until all are free