On Saturday 26th September, 350 people demonstrated outside Highgate Rabbit Farm in Lincolnshire, a supplier of rabbits and ferrets to the vivisection industry, including Huntingdon Life Sciences (HLS), Europe's largest and most exposed lab. The Stop Huntingdon Animal Cruelty (SHAC) protest titled 'Operation Liberation' was part of the campaign to close down the farm and hailed as a success, bringing the attention of local people to the farms immoral practices.

Several short speeches were made by campaigners as protesters stood 750 metres from the farm which lies in Normanby-on-Spital. They were not allowed to stand any closer to the farm as police had placed a Section 14 Notice on the premises which forbids members of the public from passing the 750 metre perimeter. As demonstrators arrived police used a 12 by 6 foot banner to announce the implementation of the legislation. 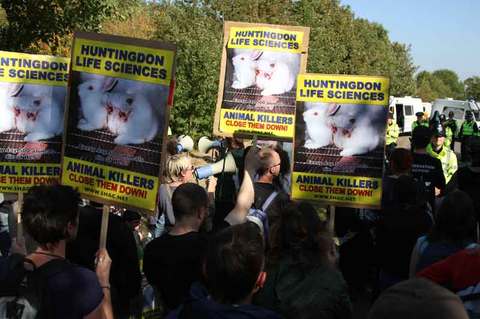 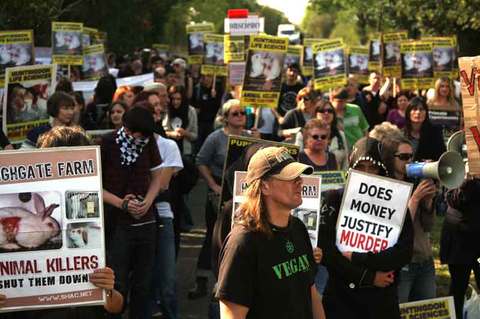 The deserted country lanes around the farm were “heavily policed” said one attendee, with 10 police vans being used as a barrier between the farm and demonstrators. The road down to the farm was also closed so that anyone arriving by vehicle was forced to get out and travel down the lane by shuttle minibus. This prevented people from arriving all at once. However the disruption caused to the local highways has brought the issue to the attention of local people, and there have been positive responses from those people who have spoken to protesters about the issue.

A 2 by 2 foot helicopter with a camera on it was used by police to monitor the demonstration and also record images of the people there, first trialed at the BNP Festival protests. Demonstrators responded saying that they are “...used to the police presence now” and that, as yet, the police had not been “in (their) faces, but no one tried anything on”.

Speaking to those 'in the thick of it', close to the front of the demo and the police presence, one demonstrator said that “Geoffrey Douglas (owner of Highgate Rabbit Farm) should be under no doubt that the farm will close. This is a peaceful demo, but it is angry and focused”. 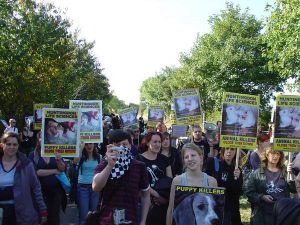 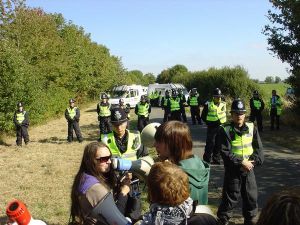 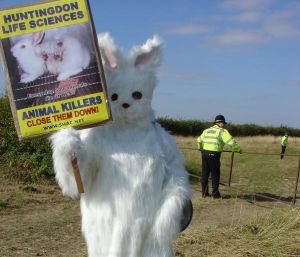