Those at the demo can phone in their news of the days events to:

Alternatively, you can publish pictures/video/text direct from your phone to the Northern Indymedia "Tumblewire" from an internet enabled phone to mob.northern-indymedia.org

During the midnight hours of 6th January 2008, Animal Liberation Front (ALF) volunteers gained entry to Highgate Rabbit Farm, in Lincolnshire, who imprison animals waiting to suffer and die in the miserable vivisection industry (Pictures | Video). 129 rabbits were liberated with £70,000 worth of damage caused to the farm and its vehicles.

Following the raid, Stop Huntingdon Animal Cruelty (SHAC) reported the farm subsequently stopped supplying rabbits for animal testing, in a plan to close down the business. However, after instruction from the police, the farm reluctantly resumed supplying rabbits to laboratories, one of which is Europe's biggest and most exposed lab Huntingdon Life Sciences (HLS).

Therefore as part of a global week of action against vivisection breeders, SHAC have called a UK national demonstration for Saturday 26th September, directly outside the farm, in an attempt to save the rest of the animals and close down the lab supplier. Just days later ALF activists claimed they painted slogans against those who own and run the farm, such as 'Douglas Family Bunny Butchers' and 'Douglas Animal Abusers' in the Market Rasen area. 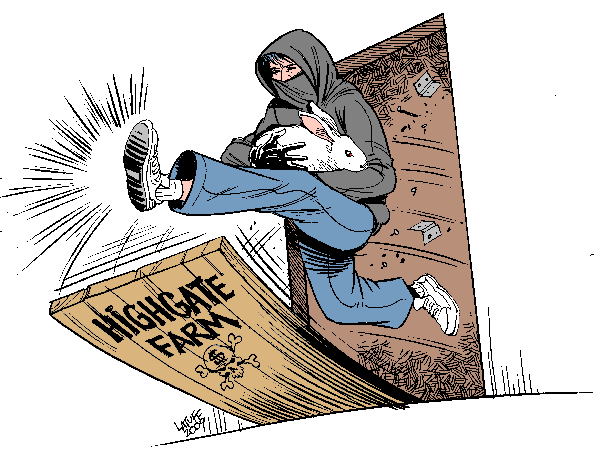 On 13th October 2008, four people were arrested after their car was stopped in Lincolnshire, with CCTV footage later showing that they had been on the property of the Highgate Rabbit Farm. Known as the Highgate Four, they were later charged with 'conspiracy to commit criminal damage' and section 145 of the Serious Organised Crime and Police Act (SOCPA), 'conspiracy to interfere with contractual relations so as to harm an animal research oganisation'. In May 2009, one of the defendants was found not guilty, whilst the other three pleaded guilty to reduced charges and await sentencing.

The closing down of Highgate would be a major victory for the anti-vivisection movement. Highgate is one of only nine known remaining breeders of animals for laboratories in the UK. During the 1990s, campaigners successfully closed Oxford University Park Farm, Regal Rabbits, Sky Commercial Rabbit Farm, Shamrock farm, Consort Beagles, Hylyne Rabbits and Hillgrove Cat Farm. Darley Oaks guinea pig farm was also closed in 2006.

The Animal Liberation Front (ALF) carries out direct action against animal abuse in the form of rescuing animals and causing financial loss to animal exploiters, usually through the damage and destruction of property.

The ALF's short-term aim is to save as many animals as possible and directly disrupt the practice of animal abuse. Their long term aim is to end all animal suffering by forcing animal abuse companies out of business. It is a nonviolent campaign, activists take all precautions not to harm any animal (human or otherwise).

Because ALF actions may be against the law, activists work anonymously, either in small groups or individually, and do not have any centralized organization or coordination. The ALF consists of small autonomous groups of people all over the world who carry out direct action according to the ALF guidelines.

Northern Indymedia reports on the demo:

http://nottingham.indymedia.org.uk/articles/42, from an early outing at demo against BNP.