On Monday 27th July, activists occupied land near the entrance of Highgate Rabbit Farm, in Lincolnshire, in protest against their breeding of rabbits and ferrets for the vivisection industry. Highgate Farm supply several university and commercial laboratories, including Huntingdon Life Sciences (HLS). In conjunction with Stop Huntingdon Animal Cruelty (SHAC) the campers are holding a peaceful protest, calling on the closure of the farm, and for the farmer to hand the animals over to a suitable organisation for rehoming.

The protest has recieved positive coverage on the front page of the local newspaper and support from locals who put up Highgate Farm posters in local villages for the upcoming national demonstration. This caused a Stafford police officer to express concerns that it may be the beginning of "the new Newchurch", begging campers not to visit the now guarded farm during the night. In reponse, Ian Caswell from South Yorkshire FIT team made an appearance, the council threatened an eviction (that was subsequently retracted), and a police helicopter hovered over the camp.

During Wednesday night, a shot rabbit with a rope tied around their neck was then thrown at the camp from the direction of the farm, which is now under investigation by CID. Protesters have therefore called for more people to come and support the camp after extending it past Friday. 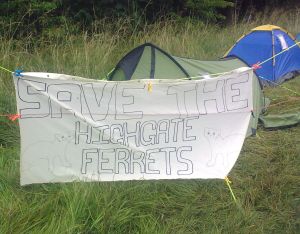 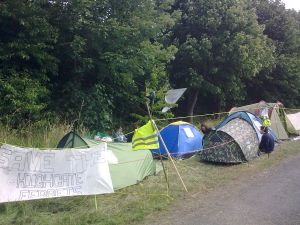 If you can make it to the camp for any period of time, please ring the camp number: 07941184529 The farm is located at: Highgate Farm, Highgate lane, Normanby-by-Spital, Market Rasen, Lincolnshire, LN8 2HQ. Click here for a map and directions.

There are several ways you can support the action:

Please keep all communications to the farm informative and polite. The purpose of your correspondence is to urge them to stop breeding animals for vivisection, and to allow the animals to be rehomed.