The BNP have announced that their annual Red, White & Blue festival (RWB) will not be taking place this year. Anti-fascists, who have protested the festival over the past 2 years, are claiming this as a victory.

According to Amber Valley BNP organiser, Lewis Allsebrook, the BNP will be trying to hold a number of smaller events across the region instead of holding one big festival. Dissidents within the BNP are claiming that the this is because few members are interested in buying tickets for this year's event.

The festival has taken place on farmland near Codnor, Derbyshire since 2007. Last year over 1,000 anti-fascists and locals marched against the festival and in 2009 militant anti-fascists attempted to block roads leading to the site. In addition, the farmer who hosts the RWB, the festival organisers and even toilets companies have been targeted for direct action. RWB host Alan Warner has cited the attacks on his property as a reason to give up hosting the event. 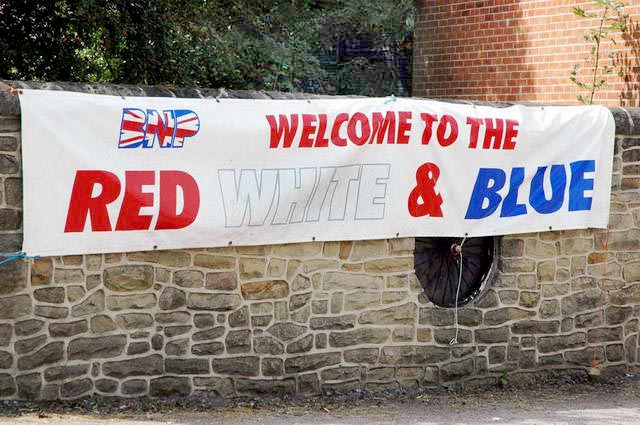 The RWB was the BNP's annual "family festival", usually held in August. Before coming to Derbyshire, the event was already notorious for playing Nazi marching music, hosting racist comedians and inspiring drunken violence between party members. Its image has not improved since then.

In 2007 the event passed largely unnoticed by anti-fascists, with only one lone protester turning up to express his views. By 2008 local anti-fascists Notts Stop the BNP were more organised and launched a concerted campaign against the festival. The licensing hearing was picketed and, as a result of mounting pressure, Derbyshire police imposed more serious security conditions on the event. BNP representatives withdrew their application in a huff and stormed out of the hearing.

Meanwhile, Alan Warner received a number of late night visits from activists who stole his flag, locked his gate and painted anti-fascist graffiti on his walls. STS, the company supplying the festival with toilets, also had their depot targeted.

On the weekend of the festival, a rally was held by several hundred anti-fascists responding to callouts from Notts Stop the BNP and Unite Against Fascism (UAF) who had had jumped on the bandwagon at the last minute. This was, unfortunately, marred by squabbling between the two groups. Meanwhile, a group of 100 masked anti-fascists emerged from the fields in an attempt to blockade access roads to the festival site. Fighting between riot police and this bloc resulted in over 30 arrests and led a local paper to plead for the BNP to "Never again" come to the area.

The direct action continued after the event with Warner being targeted two more times as well as RWB organiser, David Shapcott, being visited at his Burnley home.

Last year's festival was marred for the BNP by over 1,000 protesters turning up to march on the farm and the fact that an American white supremacist, who was booked to be one of the event's main speakers, was banned from entering the country. A number of festival goers were later convicted of racially abusing the protesters. Photos from inside the festival showed a pathetic turnout for what was supposed to be a flagship event.

At a meeting of East Midlands BNP organisers last weekend, whose minutes were leaked to Indymedia, the decision to cancel this year's RWB was announced. The local Amber Valley branch of the BNP have made the preposterous claim that the reason for the cancellation was worry about diverting police funds from anti-terrorism to policing the RWB. More cynical commentators have suggested that the campaign against Warner and the plummeting popularity of the festival are more likely reasons.