Around 1000 people converged on Hinkley Point in west Somerset on the weekend of 10th-11th March 2012 to mark one year since the earthquake, tsunami and start of the Fukushima nuclear crisis in Japan, and to demand that the UK abandon its plans for new nuclear power stations at Hinkley and up to seven other sites in England and Wales. The weekend involved a rally and 'surround the power station' action, followed by a 24-hour blockade of the entrance to the existing power station. People came from all over England, Wales, Scotland, Northern Ireland, Ireland, France, Spain, Portugal, Germany and Taiwan; and, notably, a number of individuals from Japan took part, including a pair of Fukushima evacuees and a Buddhist monk and nun. Speakers included Green party leader Caroline Lucas MP; environmentalist Jonathon Porritt; Kate Hudson, General Secretary of Campaign for Nuclear Disarmament; Steve Mitchell from the French Nuclear Phase-Out Network; and local anti-nuclear activist Nikki Clark; with musical entertainment from Somerset-based activist folk band Seize the Day, and words of encouragement from the band's lead singer, Theo Simon, who had helped occupy the recently-evicted Langborough Barn.

Theo led demonstrators on a tour of the land EDF plans to begin clearing and excavating later this month. Allegedly inaccurate signs marking sections of the land as part of the Hinkley B nuclear licensed site were removed, with other signs being defaced, and double harris fencing around the recently-evicted Langborough Barn being torn down. Security for EDF tried to evict people parked and camping overnight in the designated car park, before eventually retreating after heated words with some of the organisers. Around 100 people stayed on for the blockade, with over 60 still in place by 9am on Sunday, and others joining later in the morning.

Shortly after 1pm on Sunday, the Buddhist monk and nun led a procession to the beach to float lanterns in memory of the many thousands of victims of the earthquake and tsunami, and present and future victims of fall-out from the triple meltdown at Fukushima. The blockade ended with a closing circle at 3pm. One man was arrested late on Sunday afternoon, after most people had left, for allegedly stealing a sign. This was the only known arrest over the course of the weekend, with police adopting a largely 'hands off' approach to the weekend's demonstrations. 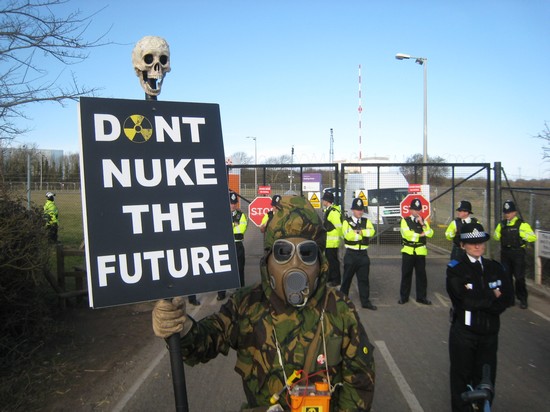 The rally was reported to be the largest in the UK against nuclear power for at least three decades and the 24-hour blockade that followed the 'surround' action was said to be the first ever of a nuclear power station in the UK. Stop New Nuclear issued a statement on 14 March thanking everyone who took part, with a round-up of media coverage and a call-out for support.

Other events in England and Wales

Fukushima remembrance events were also held in Heysham, Lancashire organised by Heysham Anti-Nuclear Alliance; in the Lake District in Cumbria, organised by href="https://mariannewildart.wordpress.com/">Radiation Free Lakeland and on the island of Anglesey in north Wales by People Against Wylfa-B, where Horizon - a consortium of German energy giants E.ON and RWE Npower- plans to build a second nuclear power station and a local farmer is steadfastly holding out from selling his land to them. Mainstream media reports: [ 1 | 2 ]

Many thousands of people attended demonstrations and formed human chains in Japan, France, Germany and many other countries around the world to coincide with the anniversary. UK protests continue next month with the fourth annual Sizewell Camp against Nuclear New Build, and in remembrance of the victims of the 1986 Chernobyl nuclear disaster in the Ukraine, due to take place in Suffolk, 20th-22nd April 2012.

French energy giant EDF is currently preparing to clear the 400-acre greenfield site at Hinkley - which is supposedly protected under national and international conservation designations - even before planning permission has been granted for its proposed Hinkley C nuclear power station. In February, activists first occupied trees on the site in response to initial ground clearance, and later squatted a disused barn at Langborough Farm in the middle of the proposed development site and home to protected bats threatened with eviction. The tree occupation was evicted after three days by a climbing team hired by EDF, and after security had kept the occupiers awake all night with "taunts and intimidation from barking dogs." In response to the barn occupation, EDF sought a wide-ranging injunction to allow them to evict the squatters and to limit further protests at the site. At the High Court hearing in London on 27 February, a possession order was granted for the occupied site but the application for an injunction against various anti-nuclear groups was rejected. After an attempt at illegal eviction on 28 February, the site was evicted the following day at the crack of dawn, with two men arrested for obstructing an officer of the High Court. One of these was Theo Simon, who had D-locked himself by the neck to the window ledge of the barn. A woman who climbed on to the dilapidated roof was brought down by bailiffs who had to erect a scaffold tower: she was not arrested. The two arrestees were held for over 24 hours before pleading guilty, each receiving a six-month conditional discharge. Around twenty people came to support the pair at Taunton Magistrates' Court.. Mainstream news reports: [1 | 2 ].

The first new nuke for years

- Hinkley C would be the first new nuclear power station in the UK since Sizewell B, completed in 1995.

- A Corruption of Governance? report, launched in January 2012, jointly produced by Unlock Democracy and the Association for the Conservation of Energy - parliament misled in relation to energy National Policy Statements concerning nuclear power (EN-1 and EN-6).

- Hinkley would use Areva's EPR design. Existing EPR projects in Finland, France and China have suffered years of construction delays and are massively over-budget, and major safety issues with the EPR design have been raised by nuclear regulators in the UK, France and Finland.

- EDF fined 1.5 million euros and its former security chief sentenced to three years in prison in France last year for employing a firm to hack into Greenpeace's computers. Guardian report.

- Energy companies, including EDF, have lent more than 50 staff to government departments - Oil and nuclear industries' presence throughout Whitehall exposed by Green MP, who warns of undue influence on policy. Guardian report.

- Senior environmental campaigners have recently reported the UK to the European Commission as they fear the hidden subsidies from the UK to two French nuclear power companies may contravene EU competition law.

Back in 2007 David Fleming published a free book on nuclear power, The Lean Guide to Nuclear Energy, in which he pointed out some key facts, the first, and most important being, "the nuclear industry will never, from its own resources, be able to generate the energy it needs to clear up its own backlog of waste". This has already proven to be the case in Japan where the cost of the Fukushima clean up combined with the cost of their whole nuclear programe will exceed the value of the power generated — it would have been cheaper for them to have burnt fossil fuels (listen to RedEye: The Fukushima nuclear disaster - one year later for the source of the estimates of the cost of the cleanup).

The history of the nuclear energy programme in Japan and the links with the horrific atmospheric testing in the Marshall Islands and the nukes dropped by the US at the end of WW2 to start the cold war are discussed in a talk titled From Nuclear Weapons to Nuclear Energy: The U.S., The Marshall Islands, and Japan.

Nuclear power will fail to achieve what George Monbiot wants

Why taxpayers serve nuclear power and not the other way around

How Fukushima is leading towards a nuclear-free Japan

Archive British Pathé footage of a 1957 news report on radioactive dust escaping from Windscale atomic station (since renamed Sellafield) and contaminating cows' milk from Bill Hewitson's farm. Following a fire in the atomic pile, several workers became contaminated, or 'radioactive', and could not have physical contact with others

The Fukushima nuclear disaster was both avoidable and inevitable. Nuclear technologies have too many inherent risks with widespread consequences to be a sensible choice for energy production, argues Rebecca Johnson 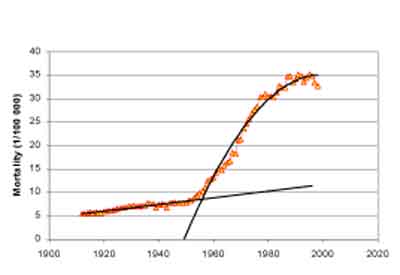 Reality of cancer rates in Sweden

Get real, don't listen to the spiel.

hear the wind and listen

newsnight muppet says ,he's an expert,oh wow ! he says though that if nuclear was safe it would have benn done by now,stick that in your nuclear pipes ! it shows how unsafe nuclaer tech is....and always will be..........a new generation of plutonium reactors are being built soon as uranium is in short supply...,these are evil fact reactors,one terrorsist attack,BOOM more lethal than uranium.... ! these problems cannot be solved...hence is illegal and protest is justified and legal....

what are the lines and the axis on the graph? cancer rates? how come one line has been joined to another in the most dodgy way? what is the source link for the graph? are you a pro nuclear troll trying to discredit anti nuclear opinion by making it look like some bad mash up of psuedoscience, conspiracy and superstition?

cancer of the ankles


I used to wear my brolly with pride
My big black umbrella with big yellow nuclear hazard stickers on it
Ever since Fukushima, when it has rained
I have walk through London with my brolly up proud
Safe in the knowledge that the toxic rain isn't drilling into my brain.
but wonder abound when one day my doctor found
ooozing sores around my ankles when i pulled my soggy socks down