CWO2 Denise Barnes, who made the decision to remove Manning's underwear, returned to the witness stand on Monday 10 December in Bradley Manning's unlawful pretrial punishment hearing (see Tweets below and this report from Kevin Gosztola). 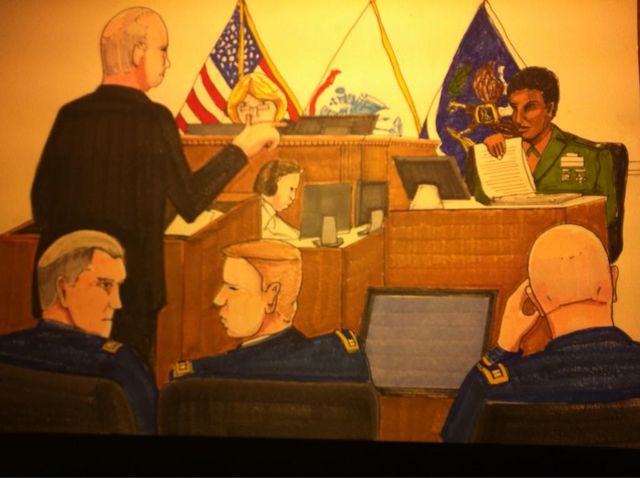 Order of witnesses for Monday 10 December: Defence cross examination of CWO Denise Barnes will conclude. Then, further government witnesses will be called:

David Dishneau has been attending the hearing.

8 Dec: (AP) Jailer: Bradley Manning needed to tell me he wanted out of solitary

About to go into session.

AS: I don't think @nytkeIIer will be back to Ft. Meade. His account got suspended.

Breaking: General Flynn sent an email to Oltman, Choike, and others entitled, 'Hardly Water-boarding' re Manning

Breaking: Barnes admits that decision re Manning had to be run up the chain of command to General Flynn.

CWO2 Barnes: 'Normally Base Commander [Oltman] does not call the Brig OIC [her]'

The most defensive and evasive witness on the stand to date, CWO2 Barnes, crumbles with cross and Quantico emails.

CWO2 Barnes: 'At the end of the day in the military, you follow orders.' CWO2 Barnes told prosecution (and former MDW legal expert) in email she took Manning underwear, but did not put him on Suicide Risk.

In Sec Battalion Commander Oltman email to Choike says that 'Barnes not alone and afraid' in her decision to take Manning underwear.

Manning so called 'advocate' counselor called his weekly reports re Manning that went up chain of command, the "Manning Times"

Barnes sent email to her subordinates that said, "Major General Arri (sp) things we are doing business the right way"

Barnes to Coombs: Let me tell you, Sir, I don't take this crap lightly. (re 'Blenis 'dicks' email)

Defense: What is the longest you had someone on POI...while at Quantico [other than Manning]? Barnes: 'few days or a couple weeks'

Re: 'dicks" email. Barnes: If 1 comment is not professional, not gonna get me to say [roughly GYSGT Blenis not fit as Manning counselor ]

AK: Barnes claimed she couldn't remember the details, acknowledged that she knew there was an argument between Col Oltman and Capt Hocter

AK: Barnes said she could not remember/hear the details. Acknowledged heard something like it. Remembered dimensions of room. (cont'd)

AK: Two Marines, both men, have said they commonly describe their own and other peoples' underwear as panties.

AK: To clarify, their testimony minimizing "panties" remark. They claimed it was routine. CW-2 Barnes testimony disputed that.

AK: Coombs building an argument that it was homophobia at brig. The male Marines said that this was routine, not biased.

KG: CWO2 Barnes weighed in on issue of whether Marines might call underwear "panties." She said drill instructors make jokes

JR: Barnes: Finds "Give Manning his panties back" (Papakie) & "We felt like bring dicks" (Blenis) comments unprofessional but not significant

JR: If US military tortured an American, you'd think ppl wud care--even those who ignore non-citizen torture. 5 spectators at Manning hrg.

JR: Manning recessed until 1:00pm b/c of broken recorder.

Coombs re Flynn's email re 'Hardly Water boarding' article about my 'masterminding a scheme to portray my client as a victim..'

Court Reporter machine is fixed...but parties called lunch. We are on break until 1pm.

Manning was watched 100% of the time on POI and SR, on SR he had someone outside his cell where he could see, taking notes.

Guards observed Manning showering and taking a shit on both SR and POI, and kept a log book just for him.

Barnes removed Manning's underwear but didn't classify him as SR. Previously testified did not think he was suicidal/made suicidal gesture.

From 29 July to December Manning go twenty minutes of 'sunshine call' in full restraints when on POI. When on SR, he didn't get that.

Manning: I would stand up to the front of the door...standing at parade rest, and I would...and I would announce through to the escorts in the observation room...I would announce, "Lance Corporal, detainee Manning requests permission to use toilet paper" (Nov 29)

Coombs: So, other than that, your estimation is that it is roughly the same [Prevention of Injury and Suicide Risk]?

Manning: ...I mean the distinction is so low that I wouldn't really...I mean it's a big...it is sort of a big difference in terms of from my perspective I didn't have to have somebody sit right outside of my cell all the time...directly outside of my cell. There was at least, the appearance of them not being there, but they were still sitting there. So, it was roughly the same... I would say ninty per cent the same. (Nov. 29)

KG: To CWO2 Barnes, solitary confinement is Brig locking detainee up & no officers/staff ever coming back to check on that person

KG: Basically, Brig let's you rot & die in your cell. So that's how CWO2 Barnes can say doesn't exist in military brigs

A note from Nathan Fuller

We are about to go back into session. Scheduled 1pm. EST. No filing, tweeting allowed during Court. See you on the flip side.

KG: Coming back from lunch recess now. Brig OIC who took Bradley Manning's underwear is still on the witness stand.

AS: I hope they keep her there all day so I don't miss the next witness.

Breaking: Barnes says to Judge 'nothing in SEC NAV [instruction]' gave her authority to remove clothing, since Manning not on SR.

Barnes testifies that her cited rule in SEC NAV giving her authorization to remove Manning a mistake on her part.

Barnes testified staff advised her later on 2 Mar since she didnt place Manning on SR, & did not consider him suicidal rule didnt apply

KG: CWO2 Barnes: nothing in instructions Quantico was following for removal of underwear from detainee if not placed on suicide risk

Yes, Barnes took Manning underwear away from him every night till he left Quantico April 20, 2011.

Re SECNAV Barnes to Judge: To be honest...there is nothing...that says clothing may be removed... (She continues)

Govt: How does CORMUS and Word doc compare? Barnes: [This document] Not verbatim. (Yikes. Beginning of Govt re-examination.)

Judge: Captain Van Elten, what are you trying to get at? (Judge interrupts Government's re-examination)

KG: CWO2 Barnes suggests MAX custody would be to protect a detainee or prisoner but that's not protective custody

Spell check question from Govt is re defense questioning credibility of this doc. (fixed, no question mark)

Barnes: 'I friggin take it personal when ppl say I have something personal against Manning or any other detainee' (part of 5 min rant)

KG: CWO2 Barnes said she was "pissed" when transfer date to Leavenworth was leaked

Barnes admits had seen Quantico vid of 18 Jan 2011 incident b/f testimony on transcript; but not all of it (CD broken)

KG: CWO2 Barnes: "Don’t have problem w/ people reporting things up chain or whatever, whether they call it whistleblowing or whatever"

JR: Barnes unhinged aft Judge's qu's, re-direct & re-cross: Went on tirade abt being a wife, mom, work wkd B/c this is all abt HER, not Manning

Barnes 2 Coombs: "No Incident Report on naked Manning episode, not a big deal. Barnes 2 Judge: "There should've been an Inc't Rep."

KG: Officials in higher ranks of Marine Corps Headquarters had no interest in launching investigation into Quantico

KG: Maj. Zelek decided to launch his own investigation into Quantico because he believed reports in media were unfair

Breaking: Manning own commanding officer thought he was placed on 'increased status' vis SR in March re removal of underwear. He was not.

Captain Kasamada (sp) was in short the Govt witness who was really a defense witness.

CPT Kasamada (sp) said 'He is intelligence [intelligent] and articulate....He wouldn't have such thought of killing himself with underwear.'

KG: Army chain of command officers visiting Manning at Quantico were never notified psychs were recommending he be taken off POI status

On cross CPT Kasamada (sp) said Brig did not tell him that the forensic psych's were recommending Manning come of POI.

KG: Casamatta, from Manning's Army chain of command: “Believe he just wouldn’t have such thoughts of killing himself w/ his underwear”

JR: I sit N courtroom 4 moments like this: Kasamata, who learned he'd totally been totally duped by Quantico, shaking Manning's hand upon exit.

But, hey! Take heart. NY Times thinks Barnes was a credible witness, after showing up for three hours.

JR: We lawyers call that "signaling"-- a big f*ck you 2 the prosecution when govt witness comes over & shakes Manning's hand apologetically.

We are going back in. Manning had testified his current company commander was 'awesome'

Court is now in recess. Press report 8:30 to 9am Visitor Control Center. Public should know begins at 10am.

MM: There was a borderline Mommy Dearest moment for one witness today.