Day of action against Workfare and Starbucks

Saturday 8th December saw two separate days of action happening across the country. The first was the start of a week of action against the governments Workfare scheme. Workfare replaces jobs and undermines wages, this can be seen by Superdrug in Brighton not hiring any Christmas temps because they have free labour from the job centre. The Work Programme actually reduces your chances of finding a job, whilst the Mandatory Work Activity has had no effect on unemployment levels. Since 3rd December, disabled people can now be sent on time unlimited workfare placements. If they say no, their benefits will be cut to £28/week indefinitely. Unemployed people who refuse can have their job seekers allowance cut for up to 3 years.

The second day of action was against Starbucks tax avoidance. Starbucks have not paid any corporation tax in the past 3 years, and only £8.6m in the 14 years they’ve been trading in this country. Costa Coffee, whose turnover last year was £377m, just £21m less than Starbucks paid £15m in corporation tax.

Previous Features: Workfare: Enslave us and we'll shut you down! 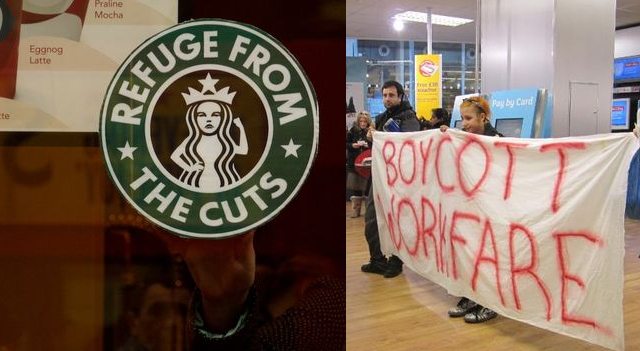 In Birmingham the Workfare demo started outside Poundland and then moved to Argos, where the shop was occupied and over a thousand leaflets handed out. The occupation drew attention to a case in Birmingham where someone who applied for a temp job at Argos, didn’t get it and then subsequently got sent there unpaid on workfare. The occupation ended after the once busy queues of Christmas shoppers had virtually disappeared. After briefly visiting Superdrug the demonstration ended outside McDonalds where free vegan burgers were handed out by Birmingham Food not Bombs.

In Edinburgh protesters blockaded and occupied both British Heart Foundation and Superdrug. A huge banner declaring IF YOU EXPLOIT US WE WILL SHUT YOU DOWN blocked the entrance to the BHF furniture store. After half an hour inside BHF, protesters moved round the corner to blockade and occupy Superdrug.

The call-out for the day of action against Starbucks suggested people turn their local Starbucks into a “refuge against the cuts” with services women depend on, such as refuges and crèches. A few days before the day of action Starbucks announced it would pay £10m for each of the next two financial years making a mockery of the tax system by choosing when it will and wont pay tax. To compensate for its loss of money Starbucks workers are reporting they are being forced to sign revised contracts with reduced benefits and some are even losing their jobs

Over 40 protests across the UK took place at Starbucks shops including in Liverpool, Cardiff, Bristol and Shrewsbury. In Islington two Starbucks were shut-down with the activists at the first shop highlighting the closure of rape crisis centres under the governments 'austerity' drive, and to compare the costs of maintaining the service against the loss of government funds due to tax avoidance. At the second shop housing action was the theme with activists holding a house-warming party. Whilst in Birmingham two Starbucks were occupied and transformed into women’s homeless shelters with free tea and coffee outside

In Sheffield as well as the refuge against the cuts and over a thousand leaflets handed out and there was also a free tea and coffee stall outside with live music. In Nottingham a protest was held outside Starbucks before moving onto other companies like RBS and Nat West. Whilst in Bath a free vegan coffee shop was set up outside the shop.

Both campaigns have had success; with workfare there is a growing list of companies who have issued statements saying they are no longer participating in the scheme and the fact that Starbucks felt it nessersery to pay £20m shows UK Uncut are not being ignored either.