Thessaloniki demo on the 19th of June article and pictures

Article and pictures from Thessaloniki on anarchists and antiauthoritarians demonstration on Thursday the 19th of June. 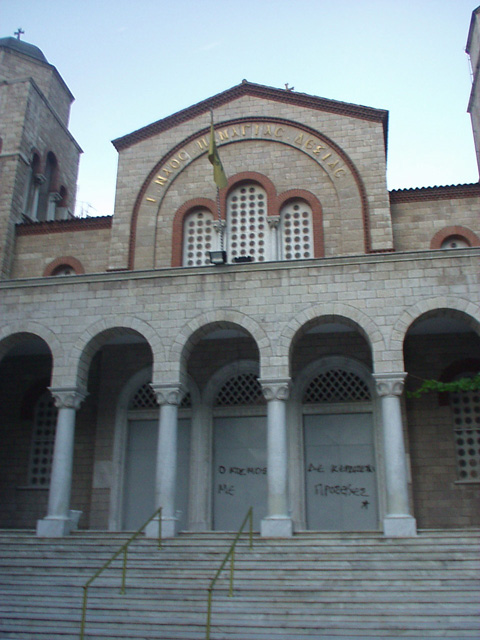 A strong demo of about 4.000 to 5.000 anarchists and antiauthoritarians took place in Thessaloniki on Thursday the 20th. The main characteristics of the demo were to show solidarity and support to immigrants and to demonstrate against the new anti-immigration legislation that will be discussed during the EU Summit. For the above reason it was decided that the demo would focus on counter-information, it would be peacefull and it would avoid any short of confrontation with the police forces that were everywere.
The demo started from the Indymedia squat inside the University at 17.30 and reached the meeting point at Kassandrou and Olympiados str. at 18.00. It lasted for more than 3 hours under light rain and marched through the streets of central and west neighborhoods that are mainly inhabited by working class and immigrants. The unexpected number of the demonstrators took the police by surprise and they surveyed the whole demo without approaching. Instead they decided to be discreet and stay on the sidestreets and to follow the demo by a distance.
The 4000 demo was becoming stronger while it was marching through the narrow streets of the west districts of the city and it also managed to win the support of the residents that received with a huge interest the thousands of photocopied texts that were distributed during the march. People were cheering and claping from their balkonies or from the sidewalks while the thousands were marching and shouting slogans against the E.U policy on illegal immigrants.
After crossing the districts of Neapoli the demo turned into Lagkada str. and headed towards the Ministry of Macedonia and Thrace via Agiou Dimitriou str. A big number of police buses and riot squads were blocking the street in front of the Ministry and the demo turned to Egnatia str which is the central avenue of the city. After a while it met the anti-racist demo organised by the European Social Forum and other leftist groups, stoped for a while and then headed back to the University area via Egnatia str. All the fronts of big department stores, banks and fastfoods on this avenue were blocked by metallic fences and after the demo they have all been sprayed with thousands of slogans and graffitis. A number of surveillance cameras was destroyed or painted while the demo was marching Egnatia str.
The actions were continued on Friday with the big demonstrations and the attempt to brake the red zone in front of the Porto Karras hotel where the EU Summit is taking place.
A demonstrationof 300 activists also headed towards north border of Greece with FYROM in order to support a big group of 700 Roma people that have been blocked there for several months and they are refused entrance to the Greek region. Extensive articles on the above actions can be found on Greek Indymedia.

PS IMPORTANT NOTICE, BOTH GREEK INDYMEDIA SITES ARE DOWN DUE TO TECHNICAL REASONS.