Last weekend during the international
mobilisations against the immigrant-bashing
EU summit in Thessaloniki, Greece, a
number of anti-capitalists, were attacked
and beaten by the police.
They also arrested  many others and we have
been hearing reports that  those arrested were
beaten in custody.
Plus there is increasing evidence that people are
being fitted up by cops on ridiculous charges
including possession of explosives!
(Along with footage of undercover cops planting
incriminating material on arrested people).

Some of those arrested received
serious injuries from the police and 9
demonstrators (including a UK activist) were
refused bail. They will remain in prison on
remand while they appeal. This process will
take around 3 months and if this appeal fails
all 9 could languish in jail for over a year
while they await their trial.

SHOW YOUR SUPPORT!
THEY’RE INSIDE FOR US
- WE’RE OUTSIDE FOR THEM!
FOR A WORLD WITHOUT BORDERS!
For more info, advice on letter writing, offers of support,
either physical or financial, email:

More from a member of AKS2003 in Greece 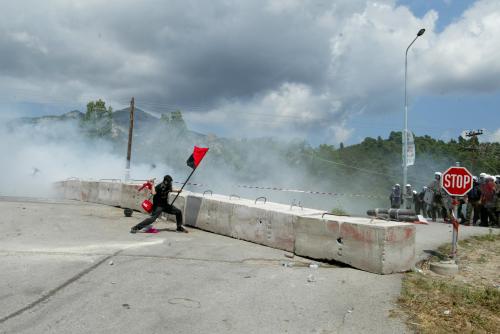 At our meeting of the antiauthoritarian movement (AKS2003) on Monday we made
some solidarity plans. We have already received 200 Euros from the mother of one
of the prisoners who is a member of CNT in Spain and we agreed to pay for the
initial court cost for 4 of the prisoners that we can afford for now with the resources
we have. We released a solidarity statement to the press and have arranged an open
meeting to make further plans (more to follow soon).

The 9 prisoners face extreme charges - not only:
1. Riot
2. Resisting authority
3. Possession of explosives

but also in several of the cases
4. Use of explosives
5. Intempted coup (technically "attempt to overthrow the authority")

In many cases, evidence has been fabricated and even undercover cops planted
molotovs and weaponry in bags near protesters at their time of arrest.

The media showed footage of 2 deliberate pieces of propaganda in particular:
a) A shop selling bags (handbags, travel bags) was totally empty. Not a single bag
left. No shelves damaged only the window. The protesters were accused of stealing
ALL of them to sell for drugs! How they took action after this with 100 bags (or
even to carry them!) is a mystery.
b) A journalist was filmed, filming an "activist" walking 2 metres behind him as he
was indiscriminately smashing windows one after another with an axe - without even
looking in the windows to determine if they were "political targets"!

The authorities smashed us off the streets on Sunday when we went to protest (unarmed and
unprotected) outside the police station and in general we have the feeling of being in
the junta again. A coach of riot cops was sitting 50m from our headquarters while we
were meeting on Monday. Yesterday when cave workers were sacked by an employer they were
smashed and teargassed during a protest in Athina and the day before, Russian-Pondi immigrant families who were cheated out of homes they have paid for were smashed and
teargassed by the riot cops. This trend of attacking every peaceful protest here is
new and post-Thessaloniki.

Our target was the red zone in Halkidiki, the red zones of blockaded US embassies and
streets and the red zones that exist in our daily lives. The natural outrage at the
system and the EU is resonant with the feelings of most people here (even the breaking
of capitalist and fascist symbols - a far right bookstore included) and the state with
the collaboration and consent of all the other EU states has moved to smash any self-organised resistance.

Your solidarity is crucial for us, for you and for our future path. Occupy the Greek
embassies. Replace the flag of nationalism with the pirate flag to symbolise both their brutality and our rebelliousness. Attack your "red zones" and let's free the prisoners.
The university occupations, discussions, concerts, filmshows, the mass antiauthoritarian march(>6000) through the city and neighbourhoods, the attack on the summit with locals in our block and the protests on Saturday and the contniuing resistance has been a success in
Thessaloniki and the spontaneous and autonomous protests of workers in struggle the last
two days in Greece are showing that our ideas are the natural instincts of people who
fight freely for freedom.

In solidarity from Thessaloniki, let us support actively all suffering life under the capitalists and their juntas.