Syrian prisoner, Souleiman "Kastro" Dakduk, has started a hunger strike in protest at the continued incarceration of the Thessaloniki 7 and his likely deportation to Syria. 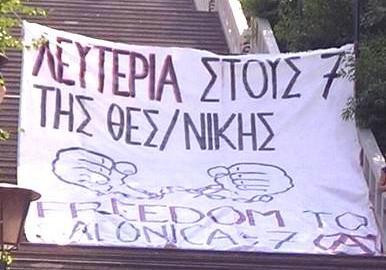 Since September 21st, the 3 month anniversary of the imprisonment of the Thessaloniki 7, Souleiman "Kastro" Dakduk has been on hunger strike.

If Kastro is deported, his life is in danger. He is a unionist – an immigrant born in Syria who was tortured by his own government at the age of 16 "for saying NO to the racist oppression by the military-dictatorial regime..that is called the arab Republic of Syria;" a member of the Construction worker’s union of Hania. He has been living in Greece for the last 18 years and although he had been arrested in Crete before he hadn’t been extradited because of the mobilization of the local community. Kastro says that when he was arrested he was giving out leaflets for the immigration issue, at a long distance from were the events were held.

In an open letter, he protests:

"the decision of punishment of all movement of resistance, the illegal[lity] of deportation, the deprival of application [for] humanitarian asylum according to human rights, and the reject[ion] of my last application" [abbreviated].

The full letter can be read at: