Here there are 3 photos of yesterday (saturday 15 Nov) 'solidarity picket' that took place - or maybe better - was supposed to take place, outside the Greek Tourist Board in central London. This posting is intended to be less of a report and more of a way to confront this 'movement of movements' own failures. 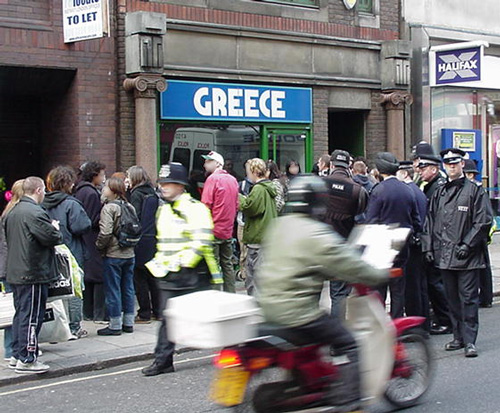 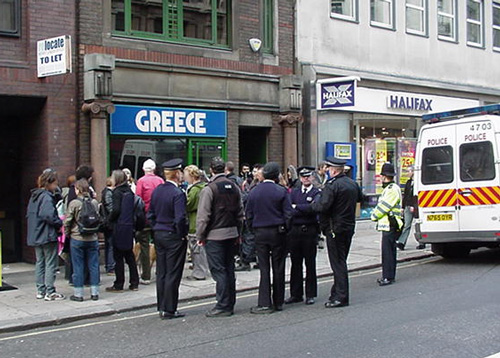 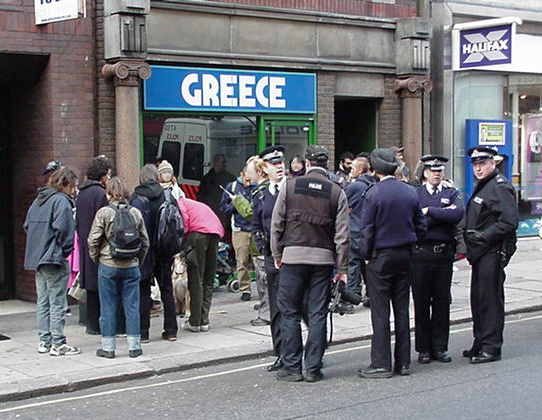 There had been a call to 'demonstrate' in London on Saturday 15 November in solidarity with the Saloniki 7 prisoners (more info on the prisoners and hungerstikers:

It seemed obvious to me that due to the fact that 5 of the 7 prisoners in Greece have been on a hunger strike for between 40 and 57 days, and that because their medical condition is far reaching a critical point (latest medical report here:

http://www.indymedia.org.uk/en/2003/11/280601.html), this call to "demonstrate in their support" would be taken seriously by many of the people in London that claim to be involved in the so called social movements. After all, the Saloniki 7 are part of the social movements of different european countries, and as such, i believe they are now 'the movement in jail' ... or, to put it with different words, 'we are all the Saloniki 7' whilst they remain imprisoned.

Not only it seemed evident the need for solidarity actions and support at this point of their very dangerous struggle, but also it appeared that the campaign was gaining momentum, that mainstream media was starting to take notice of their case, and that solidarity actions were happening more often recently, as well as proving to be more effective (see reports worldwide:

Well... sometimes what it seems obvious, or evident, or necessary doesn't reflect what happens in reality. The Saloniki 7 are in jail, and five of them facing permanent damage to their health (or even worst) because they are defending the values this 'movement of movements' claims to upheld. They are in struggle with dignity ... which, in relation to yesterday's experience, it can't be claimed for the social movements here. When i asked several people why there weren't more people turning up, why there were no banners, why the whole thing seemed so pointless, i often got as a response: "well there was an all night benefit party yesterday, you know" ... What makes it even more disappointing though, is that the all nighter benefit was in support of the Saloniki 7 prisoners, especially the 5 hunger strikers!

Anyway, i suppose there are better times and worst moments, and yesterday it was definitely not one of the brightest in london. Having said all that, still, masses of respect to those who struggle so intensively, with so much passion, with the dedication and dignity of those that don't comply ... both in a Greek jail, and here in London and everywhere.