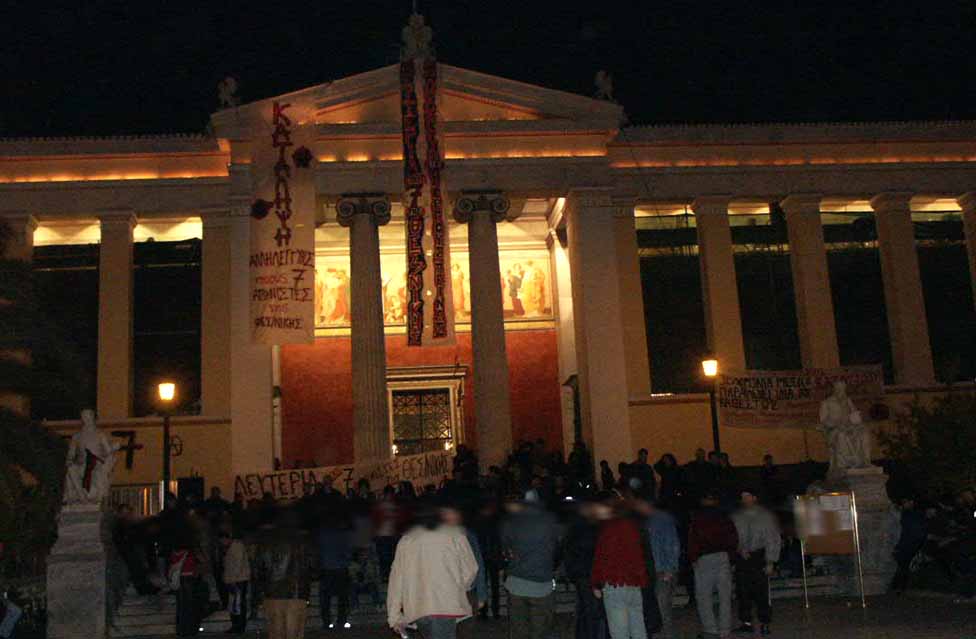 IN SOLIDARITY WITH THE 7 THESSALONIKI PRISONERS

The occupation of the University Administration, in solidarity to the 7 Thessaloniki fighters, demanding their immediate liberation, continues for the third day, by decision of the assembly held in the occupied building.

Five of the seven prisoners who are prosecuted for participating in the demonstration of resistance against the E.U. summit in Thessaloniki last June, are on a long-running hunger strike, while their health condition is critical.
Fernando Perez and Carlos Martin Martinez (49th day of hunger strike) along with Spyros Tsitsas (46th day) are detained in Nikaia public hospital. Soleiman Dakdouk “Kastro” (63d day) and Simon Chapman (49th day) are in Koridallos prison hospital.

The greek state continues to hold hostage people who struggle for freedom using their life as their only weapon as an attempt to physically and politically exterminate them.
Furthermore, this acts as a message of terror to anyone who resists the projects of domination and power, the wars and “peace” that spread death, exploitation and repression.
A moment of struggle against this reality were the actions of resistance in Thessaloniki, where we demonstrated with thousands of people against the fiesta of Europe´s political bosses, rejecting compromise, manipulation and mediation.

From the occupied University Assembly:

- We call all the resisting people to express their active solidarity to the 7 imprisoned fighters of Thessaloniki.

- We announce that the provocations and the pitiful attempts of intimidation by the police, such as the attacks made by plain-clothes cops against some squatters, cannot stop us and will not go unanswered.

- We express our strong solidarity to our seven comrades detained in Nikaia hospital, Koridallos prison and Avlona prison for minors, and to all the imprisoned fighters.
To all those who struggle for the liberation of the 7, in Patras, Thessaloniki, Kavala, Xanthi, Komotini, Mytilini, Volos, Ioannina, Larisa, Corfu, Heraklion, Chania and Rethymno.
To all those who protest, demonstrate, occupy greek embassies and mobilize by any means necessary in England, Spain, Canada, Ireland, Scotland, France, Italy, Belgium, Austria, Portugal, Netherlands, Poland, Turkey, USA, Argentina…
To all the people who fight for a world without exploitation and oppression, states and bosses, borders and prisons.

FREEDOM TO THE 7 IMPRISONED FIGHTERS OF THESSALONIKI

SOLIDARITY TO THE HUNGER STRIKERS

THEY ARE INSIDE FOR US – WE´RE OUTSIDE FOR THEM

the assembly of the occupation