Protests have taken place in over 300 cities across the globe with millions of people marching on the first anniversary of the attacks upon Iraq (see global protest pictures).

Earlier two Greenpeace climbers had scaled Big Ben to unfurl a banner reading "Time For Truth". (NB the Indymedia UK servers were down for much of the day and throughout much of the evening) 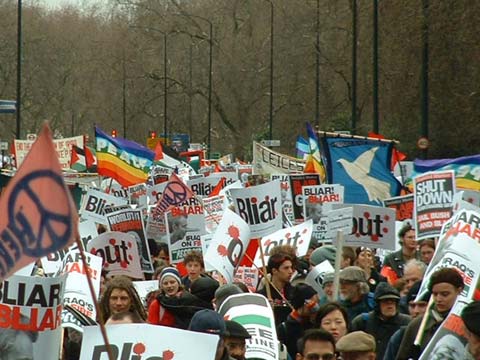 These people want “freedom,” but only for themselves. Freedom to preen. Freedom to flatter themselves that they are somehow committing an act of bravery by Speaking Truth to Power. But they’re speaking Nonsense to Indifference. Pictures of Bush as Hitler sieg-heiling away would get them killed if this was truly the country they insist it is. Nothing will happen to them. They know it. They would be killed for doing this in Saddam’s Iraq, of course; they know that too. Doesn’t matter. Bush is worse than Saddam, in the macro sense. Saddam’s sins are an inconvenient obstacle; hard to defend the fellow, but you have to concentrate on the real villains here, the people who truly threaten progressive transnational peace and solidarity and justice and human rights and –

What? Did we march on the first anniversary of Saddam gassing the Kurds?

The argument 'anti-war = pro-saddam' is propagandist bullshit. For example, saddam offered to allow US forces into Iraq to aid the search for WMD and to hold elections within 2 years (quicker than the likely US timetable) (1). Regime change without the bloodshed. The US refused to accept this offer saying only a complete surrender (= new puppet regime) and confession of WMD possession (= a lie) would suffice. The war was completely unnecessary, even on humanitarian 'liberation' grounds since Saddam had already conceded elections supervised by the US and France. Maybe he was lying, but don't pull the 'war was a last resort' bullshit. At least 10,000 civilians are now dead for no good reason, and that is a crime against humanity. And if the war was so humanitarian, why did we use Depleted Uranium? The MoD has lied about its 'safety' (2) and thw World Health Organisation has suppressed a report outlining the devastating long-term health effects, the US is even denying access to UN radiation inspectors (UNEP)! (3). Saddam was a war criminal and the war was a war crime. There is no dichotomy here, both master and former client should stand trial in the ICC.

And it really is hard not to comment on the shear stupidity of the concept of a 'war on terror'. How about a 'war on blitzkrieg', a 'war on pincer movements' or a 'war on hit and run tactics'? Few dispute the need to bring perpetrators of terrorism to justice, whoever they are and whether or not they wear a suit or a camo-jacket. But this is not best served by airstrikes and militarism. In fact the invasion and occupation of Iracq has absolutely nothing to do with the 'war on terror' anyway, so stop trolling and aquire an independent mind from somewhere guys . . .

Marching is the LEAST we should be doing (respect to the Big Ben climbing brothers and the Caterpillar 12).

Things are not as they seem

If demonstrations could overthrow bloodthirsty tyrants, it would be a dream.
But we are in reality, only weapons can kick them out, we already tried this with hitler.

The funny thing is that the most pro war were the iraquis themselves who eagerly awaited their liberation from saddam.

If you don't believe me, just ask them directly if you aren't afraid to have your convictions questionned!

Geddit? Seriously, opinion in Iraq itself remains deeply divided over the invasions, just like in other countries. This is confirmed by the recent BBC polls there.

And this is hardly a big shock to us anti-war types. Part of our case against war is that 'peoples' are not homogenous blocs all of one opinion, and by the same token should not be punished for the crimes of 'their' state. And yes, that's a case against terrorism too.

the power of the people is our best Weapon


To say that demos don't matter and have little or no effect is absurd.
When two objects meet their is an equal and opposite reaction when the anti-war movement clashed with the state on 15 feb last year it caused some major structural damage to the warmongers war machine. Since, with consiquent demos, the war machine has been breaking up the Aznar wheel has fallen off and Blair is now more commonly known as B.liar, it looks like Bush will loose the Presidential election (we hope) and in general the US state and country despite the massive media hegonmy is questioning in a big way the war on Iraq and the ridiculasly entiltled 'war on terror'. US Congress is now hearing the missgivings of its own staff who have come to distrust the warmongers and although the Hutton report was an obvious whitewash— it is unlikely that it would have even been contemplated by the establishment had the seriousness of the anti-war movement not been there in the first place.
Berlesconi is looking a bit wobbly in Italy and the anti-war movement around Europe has definately envigurated the the more radical wings of Trade unionism. Workers struggle is again on the up.
As for marching against Saddam when he gassed the Kurds—well people did, but that was then and this is now and the same people are still in charge, Rumsfeld, Chanie, the Bush (family). Saddam was a puppet of US policy so we have to make sure that the 'coalition of the Killing' doesn't get all its own way in Iraq or else we'll just see another Saddam in control yet again with the support of US, UK and EU, business and politics. When we march we meet when we meet we organise— how can this be an invalid action. The struggle continues.