Police used stop and search powers on almost anyone that moved around the Oil Festival Hall (OFH) on April 15th in an intimidatory operation to protect the BP AGM from protestors angry at the company's profiting from the Iraq war; increasing carbon dioxide emissions; construction of the very controversial Baku-Ceyhan pipeline; oil and construction projects in countries with terrible human rights records like West Papua, Colombia, and Angola; ecologically disastrous developments in Alaska, Russia and the UK; and finally, while their boss Lord Browne pocketed a £5m salary, their despicable record on union rights, health and safety, and wages. 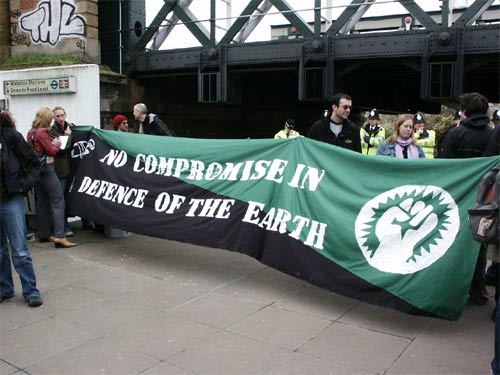 Despite small numbers, the protest kept up a constant level of noise with a sound system providing activist songs between live acts and speakers, as well as some rousing samba from the Rhythms of Resistance band. As well as London Rising Tide, there was a presence from the Colombia Solidarity Campaign, Platform and London Earth First!, as well as several other friends.

As well as the unwarranted and unreasonable searches, police created arbitrary and moving zones of exclusion for protestors, claiming their right to do so under section14, but failing to produce any map as required to show the areas concerned. They also used invasory surveillance, photographing every protestor there from every angle as well as videoing. One small consolation was the clear annoyance of the policeman in charge at BP's heavy-handed behaviour. 'If BP aren't letting people in, then the least they can do is come over and explain to those people directly - that's not our job', is pretty much what he said.

Meanwhile, the real criminals were allowed to continue with impunity despite their 'threatening behaviour liable to cause alarm and distress' by meeting inside the festival hall to hear how much money they'd made out of all the destruction, oppression, and exploitation they'd supported.

In an unprecedented move the BP security barred from entry three four campaigners who had travelled from Azerbaijan and Georgia despite their status as proxy shareholders and their agreement to abide by all security arrangements. This action perfectly revealed BP in its true light, providing almost all the national daily papers with a nice angle into the bargain. (Interestingly enough, the press chose to run also with the very compelling story of US oilworkers who had travelled to the meeting, or with the attempts of the oleaginous BP Chairman Peter Sutherland to distance the company from the scandal over exaggerated oil reserves currently engulfing Shell. So the issue of climate change and the presence of London Rising Tide, underlined by press releases, a huge spoof BP Ultimate banner, 1000 leaflets and several conversations with journalists, was completely overlooked, as it was in 2003. Is this an accident, or possibly another sign of establishment denial of the gravity of the current situation as well as the credible, movement-based ways to address it? Answers on a postcard please to LRT...)

A check with Companies House confirmed that BP had acted unlawfully, and so an official complaint will be lodged about this conduct, for companies administration will look into. Below is a transcript of a press release from various pressure groups about the incident.

Inside, a meek shareholder resolution asking the company to respect wildernesses received a pitiful 6.5% support, and those dissenting voices that had made it in to tell the truth about Baku-Ceyhan and Colombia were schmoozed and/or insulted by Sutherland...that is until the final moments, when one woman persistently and bravely held her ground by insisting on her right to speak about the company's actual record, as well as the inherent rightfulness of interrupting the BP fatcats' attempt to smoothe everything over and send sleepy septuagenarian shareholders to their freebie lunchboxes. (As well as their lunchbox, every shareholder received a slim, trendy, boutique-style bag in which they found some really classy merchandise: vouchers for a free car wash and free coffee at the 'Wild Bean Cafe', a BP biro, BP windscreen-scraper & BP 'Climate Unleashed' - sorry, 'Ultimate Unleaded' - key ring. Everyone's a winner at the BP AGM.)

So all in all it was a pretty successful day where a few new faces made contact and seemed keen to get involved. For LRT it was another step in the slow but hopefully useful strategy of making BP persona non grata in London's top cultural institutions. It had hung an 'Oil Festival Hall' banner off the building a few days earlier (until a security guard said it we might be causing a diversion allowing terrorists to do their dastardly business in another part of the building), as well as leafletting OFH workers, many of whom would support the campaign more openly if they didn't fear for their jobs - a worldwide scenario, that one.

Next stop for LRT is an 'Exhibition of Resistance to BP and Big Oil', running from June 15th-21st 2004. This series of actions and events will run alongside the BP-sponsored National Portrait Award (at London's National Portrait Gallery), and reveal a far truer portrait of an oil company. Once it was OK for a cigarette firm to sponsor the NPA - now it's time for all of us to use our creativity to kick Big Oil out of our museums and galleries…(and then get rid of them altogether). Get in touch with LRT to find out more or to say what you might be able to contribute.

Thanks for reading, and keep on doing what you can for peace, justice, the environment and the long-term survival of our planet.