Brian Haw, the Parliament Square peace protestor, who has spent almost 3 years in a continuous anti-war protest vigil opposite the Houses of Parliament (1), has been arrested and his possessions / extensive protest display removed, in a sudden midnight police operation.

Update Sat 15 - Support Brian Haw at Bow St. Magistrates Court. Meet on Tuesday 18th May, at 10.00am outside the court. 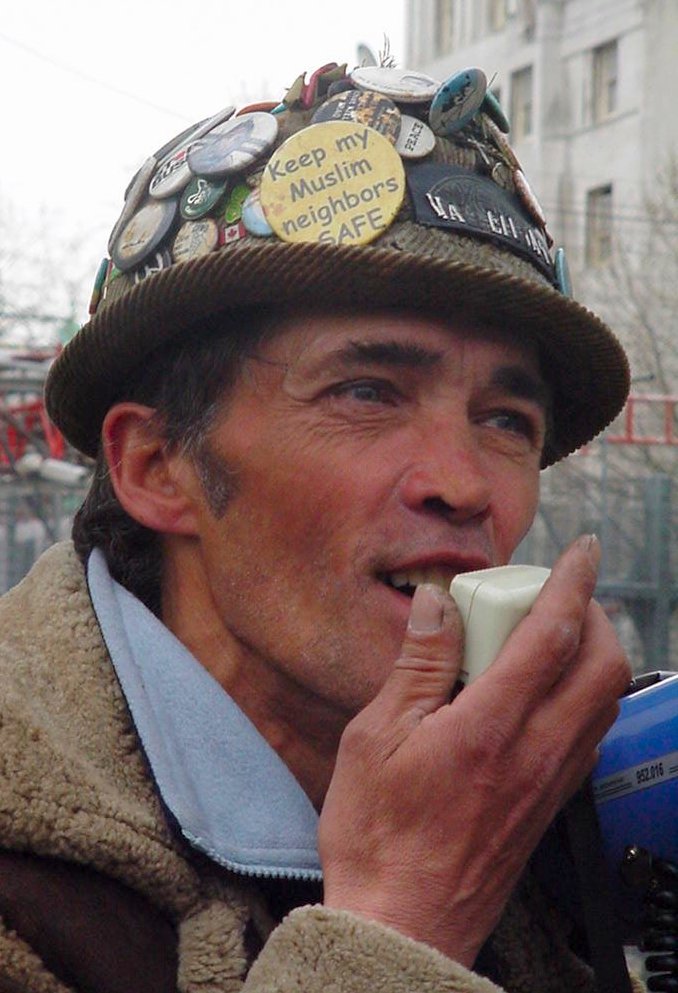 Brian Haw at the Downing Street Demo against the Fallujah Massacre, Sun 11/04/04

At around 12.20am, he was approached by a number of officers under the command of Inspector Forsyth of Charing Cross Police Station. Apparently, police were concerned about a suspect vehicle, some distance away. They imposed a security cordon under the terrorism act and the area was cleared of other members of the public before an incident took place in which Mr Haw was arrested, and 3 supporters (including 2 women) who were present at the time, were also threatened with arrest.

Despite the supposed security threat the police van did not leave the scene for some time and Mr Haw was last seen being held down on the floor of the police van, having been detained by 4 officers. After Mr Haw's arrest, the suspect car was almost immediately identified to be posing no threat and the security cordon lifted.

Subsequent to his arrest, and despite there being no longer any current security concerns, the remaining officers removed all of Mr Haw's possessions and protest placards from the site. They even commandeered a passing WH Smith news lorry to effect the removal.

In March this year the police told Mr Haw and his solicitor that they were seeking to remove him from Parliament Square but were not able to say which legislation they would employ. This followed a landmark High Court ruling which found in favour of Mr Haw and his right to protest on the site (2).

Mr Haw has long voiced the concern that the various attempts to remove him have been, and continue to be, politically motivated.

Mr Haw is represented by leading human right practice, Bindmans. His solicitor, Michael Schwarz, said: "Brian Haw is peacefully campaigning on perhaps the most significant issue of the day at a place which is supposed to be the very heart of our democracy. It is difficult to think of a more compelling example of the deployment of the rights to protest".

Mr Haw is now being held at Charing Cross Police Station. He has suffered hand-cuff injuries.

Notes 1. Brian Haw has been in Parliament Square continuously since 1st June 2001 in protest against the US/UK support of economic sanctions in Iraq, the invasion of Iraq and the 'war on terror'.

2. On 4th October 2002 Westminster City Council's High Court proceedings against him for obstruction of the highway were dismissed on the grounds that Brian was exercising his freedom of expression and assembly under the Human Rights Act.