Victory To The Intifada Pickets

As part of the Boycott Israeli Goods campaign, a picket of the Marks and Spencer store in Oxford Street has been taking place in London every Thursday since October 2000. This is in fact, the longest running protest in the UK against the illegal Israeli occupation of the West Bank and Gaza Strip The campaigners state that M&S is the biggest British corporate sponsor of the state Israel, arguing that: "The history of Britain's biggest clothing retailer Marks and Spencer demonstrates how consumer habits in Britain are tied to the oppression of other peoples. Marks and Spencer has championed the state of Israel and thus connived in the dispossession and suppression of the Palestinians. Our comforts and pleasures, which Marks and Spencer so eagerly service, have been bought at an unacceptable price."

On Thursday 6 of May the picketers were out in force again, facing a counter-picket by pro Israel demonstrators, and an increased police surveillance. Photos: 1 | 2 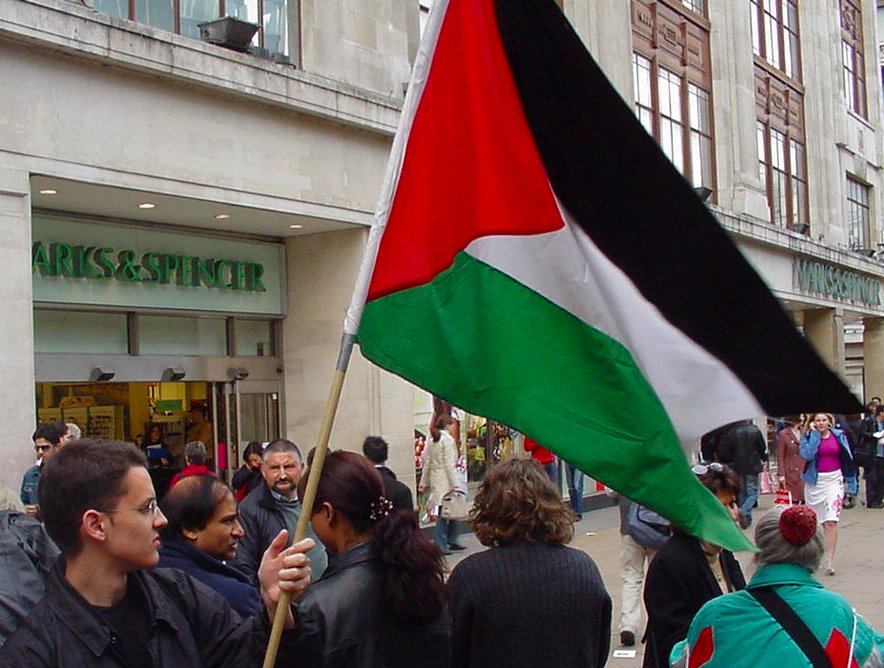 What is the charge?

I just heard about this protest last week. What exactly do you allege that M&S has done?

Why being Anti-Israel/Anti-Zionist is NOT AntiSemitic

I would like to emphasise just how much this campaign against Israeli occupation and Zionism acts in favour of the Jewish people, as well as the many Palestinian people who are living under occupation.

Firstly, Zionism, or the creation of a Jewish national state (Eretz Yisrael) in Palestine, requires not only the ethnic cleansing of the Palestinians, but the so-called 'ingathering of the exiles' of Jews from around the world. It is a situation of ethnic 'push' AND 'pull'.

On many occasions, the Zionists have collaborated with Anti-semitic policies in other countries (UK, USA, Nazi Germany etc) to justify the creation of their 'Jewish state'.

The collaboration between Zionists and Nazis is documented in the following:

2) BOOK: '51 Documents: Zionist Collaboration with the Nazis' by Lenni Brenner

In the 1950's, when Jewish immigration into Israel was at a low, a Zionist group called 'The Movement' went into Iraq and terrorised the oldest Babylonian Jewish community in the world. This forced Jewish immigration into Israel and was initially blamed on Arab extremists, yet was later exposed to be the action of a Zionist organisation. This is documented in the following:

(This article gives the testimony of one Iraqi Jew who fled to Israel after the Zionists terrorised his community, only to discover firstly, a 2-tier society in Israel whereby Oriental Jews were treated as second-class citizens to European Jews, and secondly, the true antisemitic and racist nature of the Zionism.)

2) BOOK: 'The Gun and the Olive Branch' by David Hirst, Chapter 5

The Jewish people are just being used as pawns by the collaboration between the US, UK and Israeli governments in their occupationalist 'war on terrorism'. The Israeli govermenent illegally occupies Palestinian land, knowing full well that oppressed people will resist occupation, yet still encourages Jewish immigration to Israel. It does not give a damn about the welfare of the Jewish people - every suicide bombing is used as an excuse to collectively punish, bulldoze, and occupy Palestinian land. It murders and elderly Hamas leader in a wheelchair, in the knowledge that this will aggravate more violence, hence another excuse to build the apartheid 'safety' wall.

As a group of socialists/communists/anarchists/jews/christians/muslims etc., I think people who support the pickets would see the reason to fight for the right of Jews (and other faiths) to live in whichever country they wish, and see fighting antisemitism accross the world as more important than using it as an excuse to build a Jewish State.

I would like to leave you with an extract of Betar Ideology (Betar is the Zionist youth wing of the Likud party, who support the counter-pickets), and with a list of Jewish organisations who are opposed to Zionism and to Israeli occupation.

“The building of Betar is founded upon the principles of discipline. Our aim is to make Betar such a world organism which, at a sign from the center, will be able simultaneously to move tens of thousands of hands in the cities of all countries.”
“Discipline is the subordination of a mass to one leader; that leader must subordinate himself to his superior, the superior to somebody higher than himself, etc.”
“The salvation of Israel will dawn at the moment when the Jewish Nation will learn how to act together and in unison, preferably as a "machine".”
“We all know, we often deplore the fact that to the average Jew manners of appearance are of no consequence whatsoever, this is not a "trifle" it is an important problem of self-respect. A man must care of his bodily cleanliness not because he fears his fellow men, but simply by reason of self-respect.” (notice the anti-semitic notion that the average diasporic Jew is “unclean”.)

Jewish Organisations who are against Zionism/Israeli occupation:

4) Jews Against the Occupation:

Sorry if I have missed any out. See

* In Solidarity with Jews and Palestinians, and all internationally oppressed people. *

In the West the movement that seeks to anhiliate the world's only "Jewish State" always goes out on a limb to point out that it is NOT antisemitism.

Across the Middle East, of course, the anti-Zionist movement is brazenly anti-semitic and goes out on a limb to point out that the Jews control the media, that the holocaust never happened and that the nausiating racist forgery "the Protocols of the Elders of Zion" is real.

It is this Middle Eastern anti-semitic base that fuels and mobilises the campaigners in the West.

Ask yourselves these questions

1) If this struggle is genuinely about Palestinian nationhood rather than antisemitic pan-arab imperialism, why didn't Egypt & Jordan set up a Palestinian State in the "occupied territories" in the twenty years that they were occupying Gaza & the West Bank? Or the centuries that the whole area has been under Arab and Muslim control?

2) Why brand returning Jews as land grabbing colonialists when most of the Arabs settled in Palestine from other countries?

3) As only half of historical Palestine was in todays Israel, why aren't you campaigning for Jordan & Syria to give up land?

4) If this boycott is about establishing a state, why aren't Turkish & Russian companies being boycotted to pressure them into freeing Chechnya and Kurdistan?

5) If this boycott is about human rights, where are the boycotts of Iran, Syria, Saudi, Zimbabwe, North Korea etc. etc. etc.

6) Why just the Jewish State?

7) Why is it just the "Jewish" Marks & Spencers that is being targetted?

8) Many countries were carved out of the old Ottoman Empire. Which of them has full democracy for all its citizens regardless of race, has a free press, freedom of speech, repsects the rights of gay people, treats women with equality, has free health care for all its citizens, allows total freedom of worship, has no death penalty - despite being at war to defend itself from total anhilation since its inception?

9) Is there anything vaguely antisemitic about the covenent of Hamas stating: "the Islamic Resistance Movement aspires to the realisation of Allah's promise, no matter how long that should take. The Prophet, Allah bless him and grant him salvation, has said: "The Day of Judgement will not come about until Moslems fight the Jews (killing the Jews), when the Jew will hide behind stones and trees. The stones and trees will say O Moslems, O Abdulla, there is a Jew behind me, come and kill him. Only the Gharkad tree, (evidently a certain kind of tree) would not do that because it is one of the trees of the Jews."

10) Why is the random murder of Israelis (of all ages & races) in cafes, bars, nightclubs, shopping malls, buses seen as "resistance" when the fence that protects them is branded "evil"?

This boycott is racist. The movement behind it is racist. Sadly many of the supposedly progressive activists that drive it are too intransigent, too obsessed with trying to be radical or just too plain dumb to realise it.

Victory to The Intifada is an Anti-Zionist, Anti-Racist front organisation for the Revolutionary Communist Group. They sell their newspaper Fight Racism Fight Imperialism and argue, in a sectarian, ultra-left style, that the struggle in Palestine against genocide by the World Bank, the International Munitary Fund, the Charity Commission, The Jewish National Fund, Apartheid Israel, US Imperialism, The Labour, Liberal & Tory Parties and most British corporations lead by Marks & Spencer is the same as that of "Socialist" Cuba.
They should join the Palestine Solidarity Campaign which is more democratic and much larger.
Good luck comrades, but people will only learn by struggle!