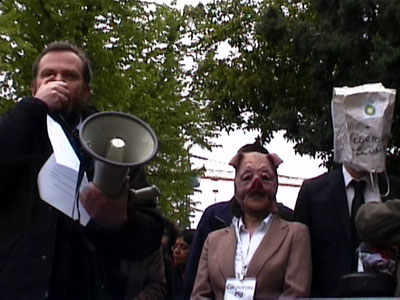 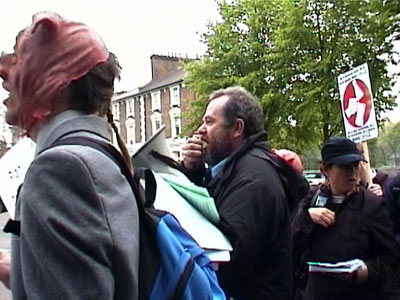 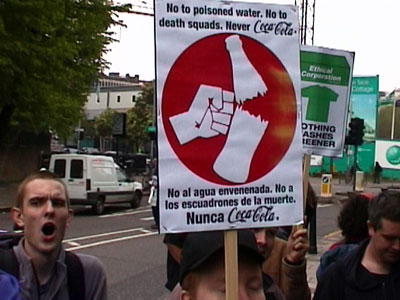 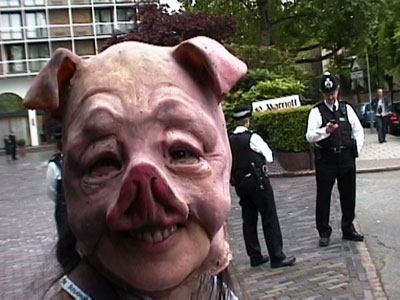 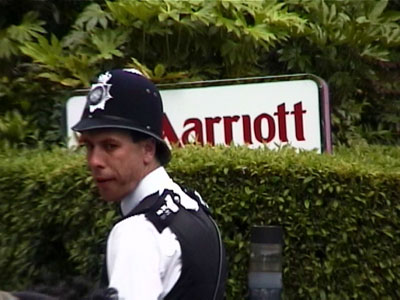 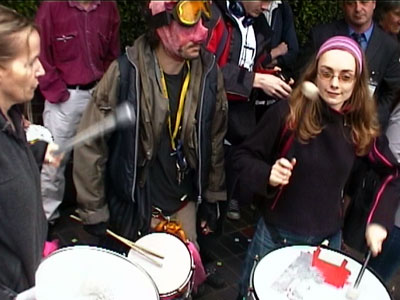 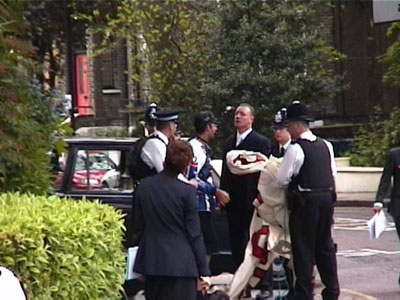 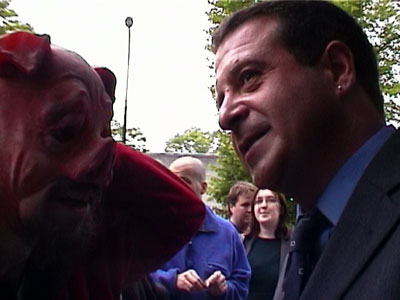 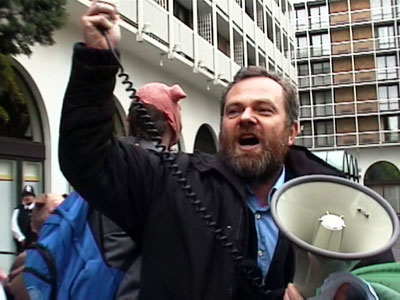 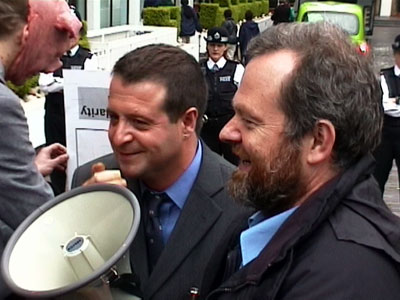 Seminars at this conference, which was attended by the likes of Shell, BP, Gap, McDonalds, Coca-Cola, Levi Strauss and Marks & Spencer, included discussion-topics such as "Why should Chief Executives take Corporate Responsibility seriously?", "Is Corporate Responsibility simply another management fad?" and "How smart companies are using CR for commercial objectives." The Chairman's Address, given at 9.30am, was appropriately titled "Profits and Corporate Responsibility," which just about sums up where these guys are coming from.

So, late afternoon around sixty demonstrators congregated outside the Marriott Hotel in Swiss Cottage, where the conference was taking place, and engaged in some good, old-fashioned, frivolous fun and games, taking the piss out of the absurd proposition that corporations actually want to be held accountable. The message loud-hailed by Andy Higginbottom from Colombia Solidarity Campaign, which helped co-organise the protest, was "Corporate Responsibility? You're Having A Laugh!" Unfortunately the police prevented protesters from unfurling a banner which had those very words on it. Nonetheless, the crowd found a good pitch with their laugh-in, as everybody howled at delegates inside for pretending to ignore this blatant sub-text of 'greenwash' spin-mongering.

Comedian Mark Thomas blagged his way inside for one of the seminars before the protest started, where he asked the panel a question from the floor: As it's inevitable that a corporation working within the free market is driven to increase profits and minimise costs, which results in human rights abuses and lack of trade union recognition, surely the rhetoric of claiming to adhere to human rights and environmental standards is actually just window-dressing and greenwashing? While a McDonalds employee on the panel answered this with the dubious claim that shareholders do indeed take account of human rights as much as they do profits margins, his co-panelist, a litigation lawyer, conceded that this was only partly true.

Mark Thomas also corrected one of the panelists who stated in defense of Coca-Cola that the Colombian company which owns and operates the infamous Bucaramanga bottling plant, which is currently being sued by representatives of trade unionists murdered there by paramilitaries who are allegedly in collusion with management, was "independent" and not owned by Coca-Cola. However, as Mark pointed out, Coca-Cola in fact owns a 46% share in the company. The legal action in the US is being conducted under the Alien Tort Claims Act, which is an old piece of legislation recently rediscovered and used in several similar high-profile lawsuits.

Outside, Andy explained how Coca-Cola had contributed to the terror in Colombia as well as stealing and polluting vast quantities of water in India. BP has forced thousands of people off their own land in Colombia to make way for a pipeline and also refuses to let its workers there organise into unions. Between speeches and "subvertising" chants (eg "Baby Gap - if they're old enough to wear 'em, they're old enough to make 'em") the samba band kept everyone's spirits high while suited 'corporate pigs' went round telling people to "get a job!" When asked what the atmosphere was like inside the hotel Mark Thomas gleefully revealed, "As soon as they heard the drummers start the shiver of fear went through the audience!" Let's hope they hold on to that feeling.