Dalston junction in Hackney, was closed off on the afternoon of Friday 30 as a huge police operation took place to evict the popular and well-known occupied venue and social centre, the Poison club. At aproximatly 3:00pm the police axed down the door, roughly handling the occupants, immediatly evicting them from the building, whilst filming the operation. This raid was on the basis of a drug search, followed by a second 'explanation' that the building was structurally unsound due to a fire next door the night before.

The Poison Club was home to around nine residents and has been in existence for almost 2 years. Described as a non-commercial D.I.Y meeting point for friends of punk rock, hardcore and grindcore, the residents and users of the Poison Club also regularly facilitated its use as a venue for benefits such as Zapatista solidarity. The centre has also been a focal point for the queer punk community. The Poison Club is the latest eviction in a continued drive to harass and evict squats in the Hackney area. Full report

Meanwhile, an eviction is also looming at the Autonomüs Lab Resistance and Rebellion for Tuesday 3rd August. This occupied space in Camden Town was opened in early June for the "Greenwash or Us, Exibition of Resistance Against BP and Big Oil", and it has been open daily to the local community ever since. A series of events such as exhibitions, meetings, workshops, screening and music nights have been taking place at the centre on a weekly basis. See flyer of upcoming events.

The Autonomüs Lab is now engaged in "resistance and rebellion", and throwing some fun and games to go along starting on Sunday 1st August. A three day non stop bike protest running along a circuit around Camden Town has been called, as well as a series of local actions which include "carring out random ID checks on the local population in a solidarity action with the palestinian people". Also the "Camden Town Apartheid Wall" will be erected by the Zapatista Palestine Solidarity Group. The Auonomüs Lab is also calling for active resistance to the eviction starting on Monday night, and will be providing food, zapatista coffee and sleeping space for everyone that makes it down to the occupied space at 50 Chalk Farm Road NW1. 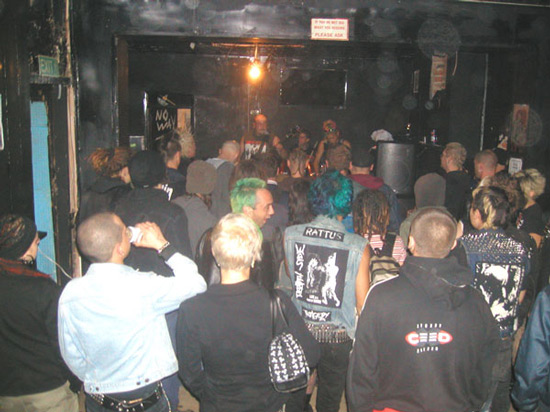 Camden Town wakes up this morning to find Autonomüs :Lab Resistance and Rebellion eviing up to face the bailiffs and the police. People managed to paint 6 banners thru the night, some way colourful, way WAY WAY.

One reads."your comunity is ill - come together" another "we dont need permission to be free" another "cars oil war - comunity equality diversity ecology" ..mmmm .. bit strange to explain, but it willl make sense when you see it, and you will - as they will not let them go! - ...if you come down to the events they plan or join the colective to work on their ongoing projects, as the long last minute banner reads, " we are not going anywhere".

for many in camden, a first shot at preparing for a confrontation-al action they worked in the wall for the palestine solidarity action that they'll stage later today. by six in the morn the helmets werent dry, but the bazooka was, and the ak 47s, the grenades and the mad indian bomber. they made pistols, misiles asault rifles, and confetty, cooked and drank coffee and smoked and talked and talked and worked,and, appart from the usual episode or two of camden town weirdeness, everyone had a good time.

now we hang the banners and barricade. and wait, music turned way up, in alegre rebeldia.