Campaign groups "Voices in the Wilderness" and "Iraq Occupation Focus" call for an emergency vigil at 10 Downing Street in Central London on Sunday, 15 th of August, Noon -2 pm to protest against the latest military attacks in Iraq. Densely-populated Iraqi cities are under fire from US-UK forces. On Thursday, more than 75 Iraqis were killed in the US bombardment of Kut. British troops have killed at least twenty in their assault on Amara.

The attack on Najaf, led by US warplanes, has been condemned by public opinion across Iraq. Sixteen members of Najaf's 30 member provincial council have resigned in protest at the assault.

In the last 48 hours, hundreds of civilians have been killed by occupying forces in the cities of Najaf, Kut, Sadr City, Sammara, Nasiriya, Amara, Basra, Ramadi and elsewhere. 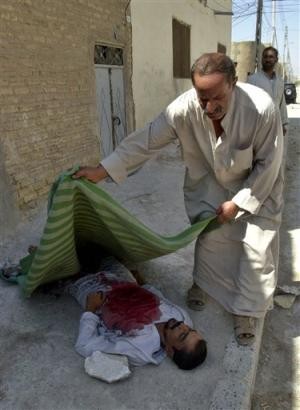