T-Mobile wish to erect an enormous mobile phone mast in Richmond Road, Hackney. This will be next to London Fields park, a few metres away from a housing estate, on on the pavement! Hackney Council asked if anybody objected, and naturally many did. So the planning permission was turned down. 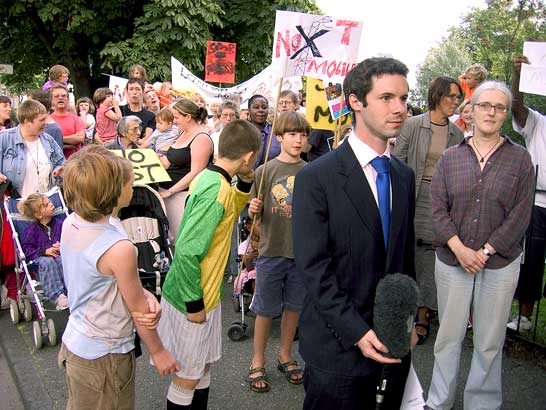 However luckily for T-Mobile, and just by chance, Hackney Council turned down the application TWO DAYS TOO LATE. By default T-Mobile now have permission to erect the phone mast that the people of the area clearly rejected. At 7.30am Thursday morning construction workers arrived to dig up the pavement and begin work. Unfortunately a few things got in their way. Firstly the barriers left there by T-Mobile the previous evening had been dismantled and disposed of. Secondly they were seen arring by people on the estate and an immediate protest was convened to stop them. The contruction firm left vowing to return at 4pm that day. They didn't but a large group of local people did (maybe they were watching us and thought better of it?). We reconvened at 6pm and these are some photos. They will return–so must we. If you live Hackney or you want to help an email address will be posted later. Further reports and photos to follow. Once again the event has revealed a number of things about living in Hackey: 1) Hackney Council is complicit and compliant in letting big business trample over ordinary people. 2) Our elected representatives don't give a toss about the people they are meant to represent. 3) There is something rotten and deeply suspicious at the heart of the Council. 4) The people of Hackey are great. T-Mobile want to erect a phone mast. We will stop them.