Activists occupied the offices of the London branch of the Commonwealth Bank of Australia on Monday 20th September. The bank is the largest shareholders in Gunns, who are responsible for logging in old growth Tasmanian forests. They also act as bankers for the Eden woodchip mill in New South Wales, responsible for turning pristine wilderness into bog roll, killing countless rare and beautiful species in the process. 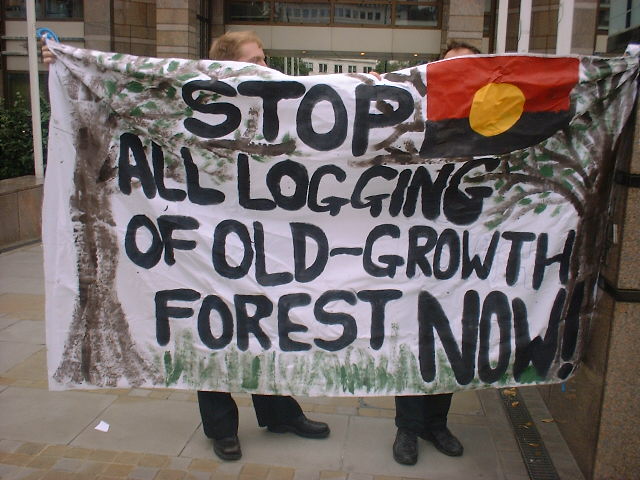 So, in solidarity with the Australian forests and their defenders, it was time to act. We visited their offices (at 85 Queen Victoria Street, in the City) and invited ourselves in. We got past the downstairs security guard (who has had Shac campaigners outside the offices at least five times this year and should have know better!) and then barged through a locked door upstairs to gain access to the trading floor. There we stopped work, handed out leaflets and informed the staff how pissed off we were with the company. After a while the cops arrived and chucked us out, but not before the whole office was aware of how we felt. The office was much bigger than we expected, and totally open plan, so we couldn't find a managers office to barricade into. Hopefully the fact that we got in should get back to Australia as the managers there will have to discuss how crap their security was, and our visit was probably the most exciting thing to happen there all year.

Unfortunately the camera didn't work inside and some of the traders were a bit lairy (aussie cokehead rugby types, and a mad old man), so the pics are of us with the cops after we'd been chucked out. No arrests, although we got followed around London for about 3 hours trying to lose the police, in case we decided to visit other Australian friends….

Australia may be the other side of the world but some of us over here know some of the culprits over there have offices over here, and we ain’t gonna stop visiting till they stop chopping down the trees!