On tuesday the 23rd of November almost 7 months since human rights activists Ewa Jasiewicz and Pennie Quinton were charged with aggravated trespass for entering the Iraq Procurement conference,a major contract signing event attended by the Iraq interim government ministers and Brian Wilson, Blair's envoy for reconstruction in Iraq held in London last April. In what was unquestionably a political decision by the CPS both women have been fully aqquited and awarded costs, despite a strong case against the protestors who managed to disrupt the conference when they unfurled banners and informed conference attendees that their order of business was infact nothing less then the pillage of Iraq and therefore illegal under the 1907 Hague regulations and the Geneva conventions.
The women's defense argued that they could not be charged with aggravated trespass, 'the of disruption of a lawful event' as infact the Iraq Procurement conference was unlawful as it was facilitating the pillage of Iraq which was under occupation by the US and the UK at the time of their action. Naomi Klein who was to have been a key witness at the trial attended a press conference at the NUJ on wednesday the 24th of November to speak about the implications of the CPS's decision in relation to this first attempt to put the Pillage of Iraq on trial.
See also Fallujah Eyewitness Newswire article (27th Nov). 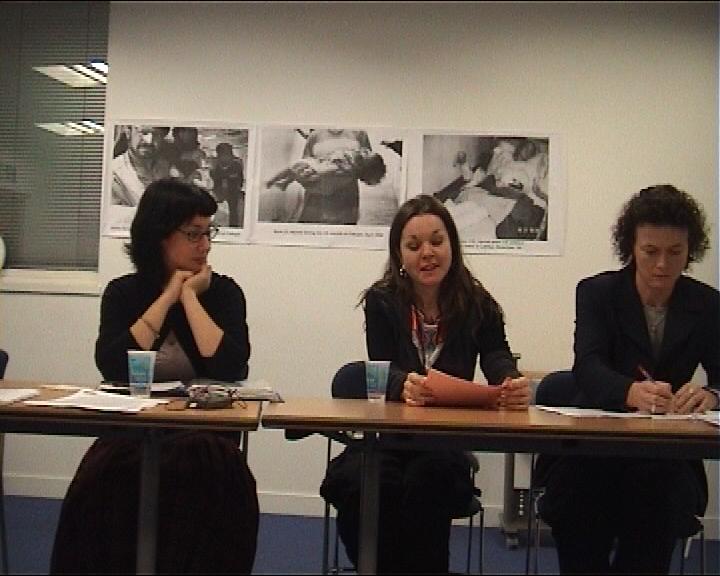 Defendents and their lawyer at press conference 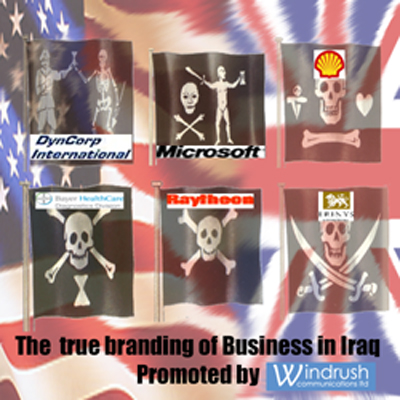 The true branding of business in Iraq

Corporate Plunderers Windrush back off from giving evidence in Iraqi Procurement case.
In what is believed to be a politically motivated decision, the Crown Prosecution Service dropped charges of ‘Aggravated Trespass’ against two female protesters who demonstrated inside a major Iraq privatisation conference last April.
The Crown stated that ‘there is not enough evidence to provide a realistic prospect of conviction’.
Ewa and Pennie had been charged with intending to disrupt a “lawful activity” when they entered the Iraq Procurement Conference, unfurled banners, and addressed the delegates as collaborators in the daily massacres and pillage of Iraq. Their actions caused the conference venue to be evacuated and all activity to be suspended.
The women's legal representives Bindmans recieved a fax from the CPS initally dropping charges following the pre trial review. This happened after the defense submitted the argument that the conference itself was unlawful as it was facilitating pillage and that the participants and organisers were engaging in unlawful activity as a result.The two women then revived the case and claimed their right to trial under Section 23 of the Prosecution of Offenses Act 1985,which mean't they were in effect, taking the government and conference organisers Windrush Communications to court. Prosecution witnesses from Windrush refused to attend the trial and failed to disclose evidence, in violation of repeated court orders, they refused to reveal invitations, attendees, order of business and contracts procured, relating to the event.
On the 23rd of November at Highbury Corner Magistrates court the prosecution refused to give evidence and the defendents were fully aqquited with the magistrate agreeing to award costs.
Ewa and Pennie regard the prosecution’s climb-down as a victory and a total vindication of the validity and necessity of their actions and legal argument.
They state: ‘The decision undertaken by Windrush Communications to back down when faced with the legal consequences of their actions - in our belief, aiding and abetting pillage in Iraq in contravention of international law - is an open door to other activists to take further action to expose the ‘unlawful’ activity of companies and event organisers like Windrush’.
Naomi Klein, award-winning journalist and author of No Logo, had been scheduled to give evidence at the trial. Instead she took part in a press conference alongside the defendants and their lawyer at The National Union of Journalists on wednesday the 24th of November. She said that occupying countries are bound by what she termed the 'house sitters rule', "housesitters I.E the occupiers are allowed to eat the food in the fridge but are not entitled to sell the house and its contents and turn it into condinmiums."
The CPA are selling Iraq drenched in the flesh and blood of the its people, creating a capitalist free trade zone which is a Republican dream. Privatisation of Iraqi assets was illegal under the prewar constitution. In the Hague 1907 guidelines and the Geneva conventions, occupying Powers are forbidden to violate the country of occupation's constitution. The Privatisation of Iraq counts as pillage and article 47 of the Hague regulations to which both Britian and the US are signatories to, states : Pillage is formally forbidden.