As the G7 Finance Ministers met for dinner at Lancaster House in London on Friday 4th February, activists greeted them with a noisy protest. A giant 'Drop the Debt' digital counter recorded the number of children around the world who die needlessly as a result of poverty (at a rate of one child every three seconds). See report and pics | report 2.

The day before on Feb 3rd, tens of thousands of people gathered in Trafalgar Square to demand the elimination of world poverty. Nelson Mandela delivered the keynote speech where he called for millions of people to carry the message of ending poverty to the G8 Summit in Scotland in July, saying: "Sometimes it falls upon a generation to be great. You can be that great generation. Let your greatness blossom. Of course the task will not be easy. But not to do this would be a crime against humanity, against which I ask all humanity now to rise up.". See report, pics, speech in full and comments. [MP3 Audio: hear speech in fullPart 1, Part 2] [Oxfam video]

Just days before, in Porto Alegre, Brazil, at the World Social Forum 2005, the Call from the Assembly of the Social Movements pledged to take to the streets in mass mobilisations against the G8 Summit, while the Caracol Intergalaktika, the WSF International Youth Camp, called for mass resistance against the G8 and other summits taking place this year, including the IMF / World bank, FTAA and WTO.

See also: G7 Report - the G7 has no intention of cancelling the debt
SchNEWS on the G7 Finance Ministers' Meeting
Report on Church launch of Make Poverty History (Jan 29) 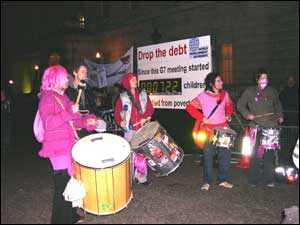