In 1992 in San Francisco cyclists started riding together monthly to assert themselves as traffic in a ride that became known as Critical Mass. Since then Critical Mass has spread to over 300 cities around the world and become a common feature of protest culture.

To celebrate 10 years of critical mass, over 800 cyclists took to the streets in London last year with a bike samba band, live guitar from a rickshaw, multiple sound systems, mad bikes the like of which have to be seen to be believed. It was massive, and it happened again on Friday April 29. At least 500 cyclists, rollerbladers and skateboards joined the 11th Annivesary in London [photos 1, 2, 3, report]. There will also critical masses in Glasgow, Liverpool and Nottingham [photos] - and probably other cities around the country as well.

On Saturday 30th April there was a successful mass "against climate change, pollution and the G8" in Worthing, Sussex. Meanwhile, in Sheffield on June 11th and the 15th there are more rides to coincide with an anti-war demo and the G8 meeting of Justice and Interior Ministers in Sheffield taking place 15th/17th. 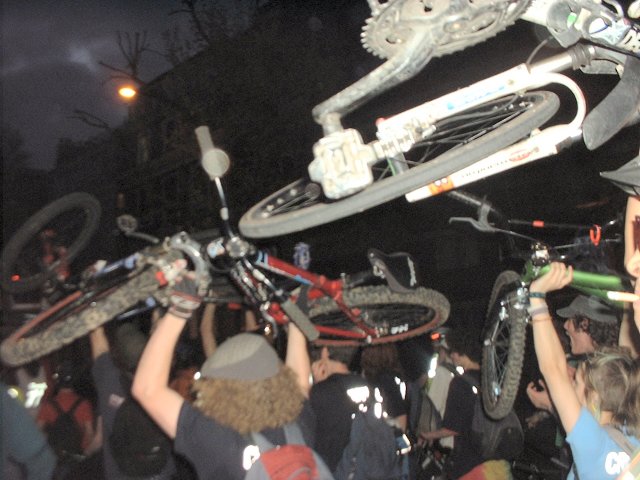 Also G8 related is G8 Bike Ride which will cycle from Brighton to Gleneagles, Scotland for a Critical Mass against climate change and the G8. This sunday there is a benefit party (May 1st -yes, Mayday) at the RampART Social Centre (www.rampart.co.nr). Starts 6pm with bike films inc 'We Are Traffic' and a trailer of 'Still We Ride'. You will also be entertained by Cycleogical Live - DavidCronenbergsWife + Lower Depths + Behind The Bikesheds. Hosted by Resonance 104.4FM - Sonic noisescapes + mashups + DJs funkin it all up.

Last week the 12 people who were arrested while taking part in a critical mass bike ride at the Derby G8 protests last month have had their bail dropped. No-one was charged, but everyone was on bail pending further 'investigation' and consultation with the Crown Prosecution Service. The police are still holding the arrestees bicycles, and of course their DNA and fingerprints.

During Bike Week 2005 and London Sustainability Week there are plans to hold the second annual World Naked Bike Ride in protest against oil dependency and celebration of the power and individuality of our bodies. Last years UK ride attracted around 50 naked cyclists, and many more are expected this year with many more rides taking place in various locations in the UK (London, Bath, Manchester, Edinburgh, etc).

Indymedia is joining the pedal powered revolution too. Next week, two clothed people will be cycling from Dorset to London on a trike which is planned to be converted into a mobile Indymedia access point.