The infernal noise brigade, the lost film festival and filastine are touring the uk this summer. 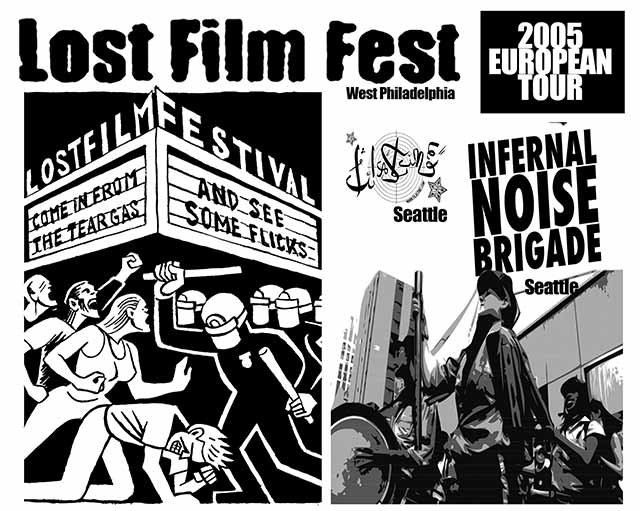 The INFERNAL NOISE BRIGADE is a 20-piece mutant marching band using drums, horns, voice, flags, and loudspeakers for intervention across the globe. At manifestations in Seattle, Prague, Cancún, & New York the INB has performed in clouds of gas and hails of rubber bullets without dropping a beat. Between these big international actions the Infernal Noise Brigade performs at festivals, raves, prisons, and Burning Man, leaving a wake of dismantled spectacle in their path.

The INB sound combines elements of drumline, taiko, Mughal and North African rhythms, with elements of Balkan fanfares, breakbeats, and just about anything else. Songs feature vocals and noise fed by miniature FM transmitters to loudspeaker rigs. Infernal equipment is reverse-engineered, from the custom welded drum-harnesses to the uniforms sewn from roadsigns and sanitation workwear. The Infernal Noise Brigade does not perform in a space, but rather occupies it, blurring the line between performer and audience.

The Infernal noise brigade have protested at summits all over the globe, from Seattle to Cancún and now its Scotlands turn. Make some fuckin noise!

LOST FILM FEST is a laugh-a-riot event with equal emphasis on both "laugh" and "r***." Focusing on pranks vs. corporations and government institutions. If George W. Bush makes you puke and you dig pie fights with cops and culture jamming, you'll love the punk rock urgency of the Lost Film Fest and its celebration of media archaeology and illegal art. Lost Film Fest from West Philadelphia is a traveling multimedia spectacle incorporating live performance and video. It's a truly independent, anti-authoritarian, anti-corporate grassroots DIY media extravaganza hosted by Festival Director Scott Beibin (Bloodlink Records, Evil Twin Booking.) Beibin travels the globe telling stories and spinning movies like a DJ using a video projector, dvd player, and backpack filled with goodies. The roadshow incorporates a sexy, smash-it-up, radical anti-capitalist anti-globalization perspective. Truly "Too Hot for TV" since 1999, the LFF has featured scathing and hilarious social commentary in the form of narrative shorts, documented pranks, hot amateur protest footage, and video re-mixes. Additionally there is an annual weeklong event held in Philly, and guerilla visits to Sundance and Cannes. This jam is about smashing the illusions cast by Hollywood, the Pentagon, and FOX News. Yeah!

FILASTINE performs LivePA/DJ sets that wreck genre, seamlessly integrating hip-hop, batucada, breakcore, drum & bass, politics, and international obscura. The core of a Filastine live performance consists of a laptop & electronics where tracks are remixed and layered, then enhanced with live percussion. Filastine will also be joined by MC Subzero Permafrost, the rhyme-spitting sephardic ice-princess of New Orleans, on this European tour. Filastine toured the UK last fall as part of Nettle, a project of DJ/Rupture, on the Street Music Arabe tour. His releases are available on Soot Records, Entartete Kunst, and Post World Industries, and he is currently working on a number of collaborations with Brazilian rappers as part of the project Sonar Calibrado. Filastine has performed in a bizarre variety of spaces and nations in the last year, from Argentina to Japan, gate-crashing and delivering up the sonic immediatism.