Treat your ears to a once in a lifetime double bill drum fest with the inspiring Rhythms of Resistance facing off the mighty Infernal Noise Brigade who are fresh off plane from the USA.

Also flown over the pond to play at the rampART before heading up to the G8 is the awesome Filastine, but that not all.

For your viewing pleasure, the LOSTFILMFEST is coming into town too!

Focusing on pranks vs. corporations and government, pie fights with cops, riot footage, and culture jamming, you'll love the punk rock urgency of the Lost Film Fest and its celebration of media archaeology and illegal art, incorporating live performance and video.

The INFERNAL NOISE BRIGADE is a 20-piece mutant marching band using drums, horns, voice, flags, and loudspeakers for intervention across the globe. At manifestations in Seattle, Prague, Cancún, & New York the INB has performed in clouds of gas and hails of rubber bullets without dropping a beat. Between these big international actions the Infernal Noise Brigade performs at festivals, raves, prisons, and Burning Man, leaving a wake of dismantled spectacle in their path.

LostFilmFests Beibin travels the globe telling stories and spinning movies like a DJ using a video projector, dvd player, and backpack filled with goodies. The roadshow incorporates a sexy, smash-it-up, radical anti-capitalist anti-globalization perspective. Truly "Too Hot for TV" since 1999, the LFF has featured scathing and hilarious social commentary in the form of narrative shorts, documented pranks, hot amateur protest footage, and video re-mixes. Additionally there is an annual weeklong event held in Philly, and guerilla visits to Sundance and Cannes. This jam is about smashing the illusions cast by Hollywood, the Pentagon, and FOX News. Yeah!

Lost Film Fest in the news:

The core of a Filastine live performance consists of a laptop & electronics where tracks are remixed and layered, then enhanced with live percussion. Filastine will also be joined by MC Subzero Permafrost, the rhyme-spitting sephardic ice-princess of New Orleans, on this European tour. Filastine toured the UK last fall as part of Nettle, a project of DJ/Rupture, on the Street Music Arabe tour. His releases are available on Soot Records, Entartete Kunst, and Post World Industries, and he is currently working on a number of collaborations with Brazilian rappers as part of the project Sonar Calibrado. Filastine has performed in a bizarre variety of spaces and nations in the last year, from Argentina to Japan, gate-crashing and delivering up the sonic immediatism.

"The live and programmed drums feel like time itself has been sliced
open, offering a cross-section of temporality's complex and relative
clockwork." (The Wire)

"I caught these guys – Filastine and Maga Bo – by chance at the
Capitol Hill Block Party, rocking laptops in an impromptu setting on an
old beater, wearing orange auto-mechanic suits and black masks. They
were the most interesting act of the entire event. Their sound warps
the boundaries among drill 'n' bass, Muslimgauze-style Arabic breakbeat
terror, and early Meat Beat Mainfesto's intelligent industrial
funk." (The Stranger)


The INB sound combines elements of drumline, taiko, Mughal and North
African rhythms, with elements of Balkan fanfares, breakbeats, and just
about anything else. Songs feature vocals and noise fed by miniature FM transmitters to loudspeaker rigs. Infernal equipment is reverse- engineered, from the custom welded drum-harnesses to the uniforms sewn from roadsigns and sanitation workwear. The Infernal Noise Brigade does not perform in a space, but rather occupies it, blurring the line between performer and audience.

"The virgin experience of the Infernal Noise Brigade in action can be
adrenaline boggling. The music explodes the senses like a
thunderstorm." (Clamour Magazine)

"Seattle's Infernal Noise Brigade drowns the sound of concussion
grenades with their drums." (The Village Voice)

"The result, I think, is not only liberating for the band, but also
something more raw for the audience, something truly interactive." (The
Stranger)

Sparkle Girl Solidarity for all the G8 Protests 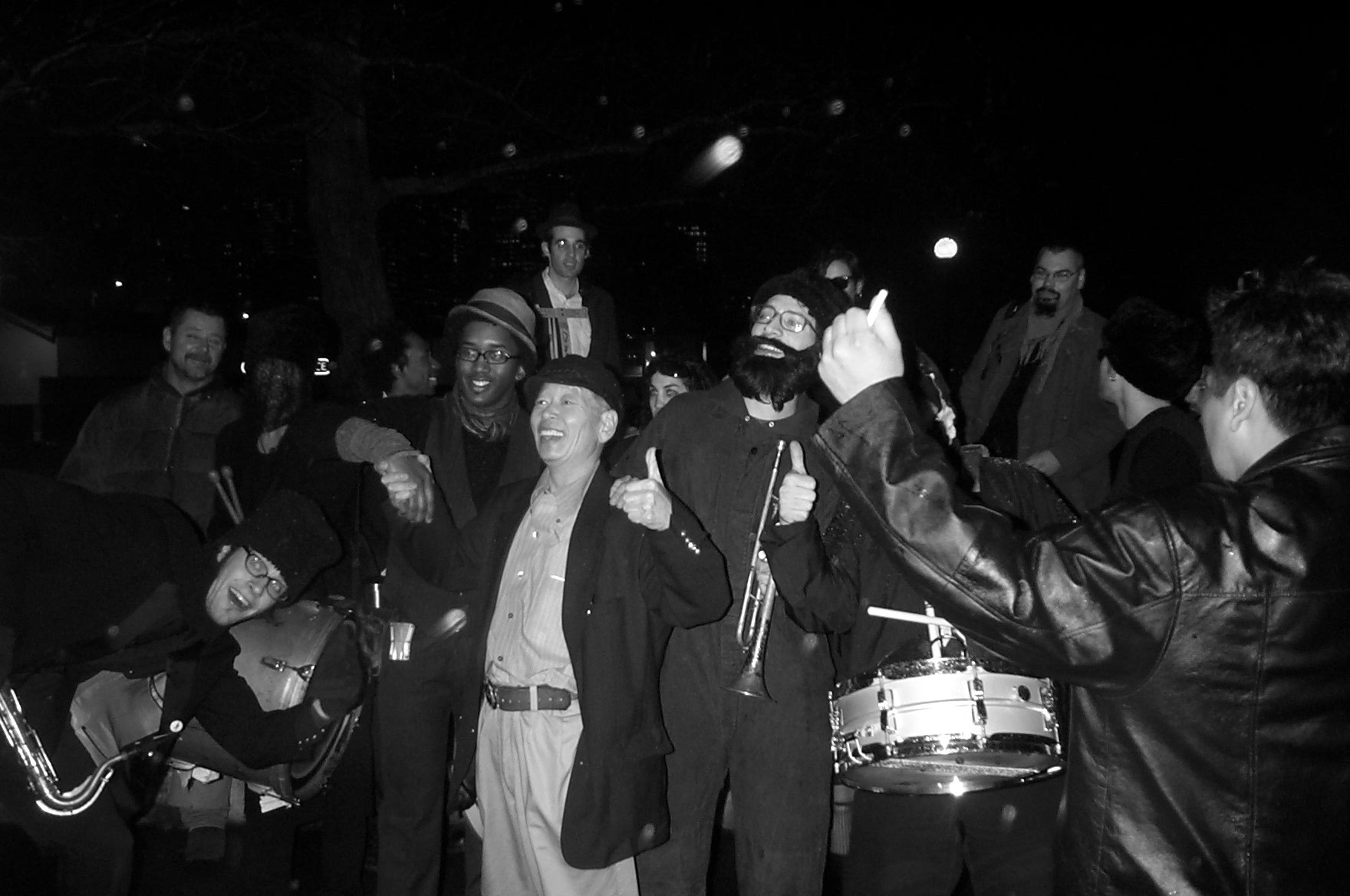 Sparkle Girl urges everyone to see the INB and Filastine at the Rampart as they begin their European Tour. Phenomenal sounds of protest and defiance that make you shake your ass and your fists.
We can promise anyone who attends will leave exhilirated by the joyful noise produced by all involved.
How the hell do we know?
We've seen em in action at every opportunity and documented the fun and mayhem.
Don't miss out!
Shut down the streets with drumbeats and smiles.
We only wish we could be there to take part.
Love and support to all
Sparkle Girl