Against Israeli Apartheid and Occupation
Implement the ICJ decision NOW!
Join the The Wall Must Fall in Edinburgh on Monday the 4th of July 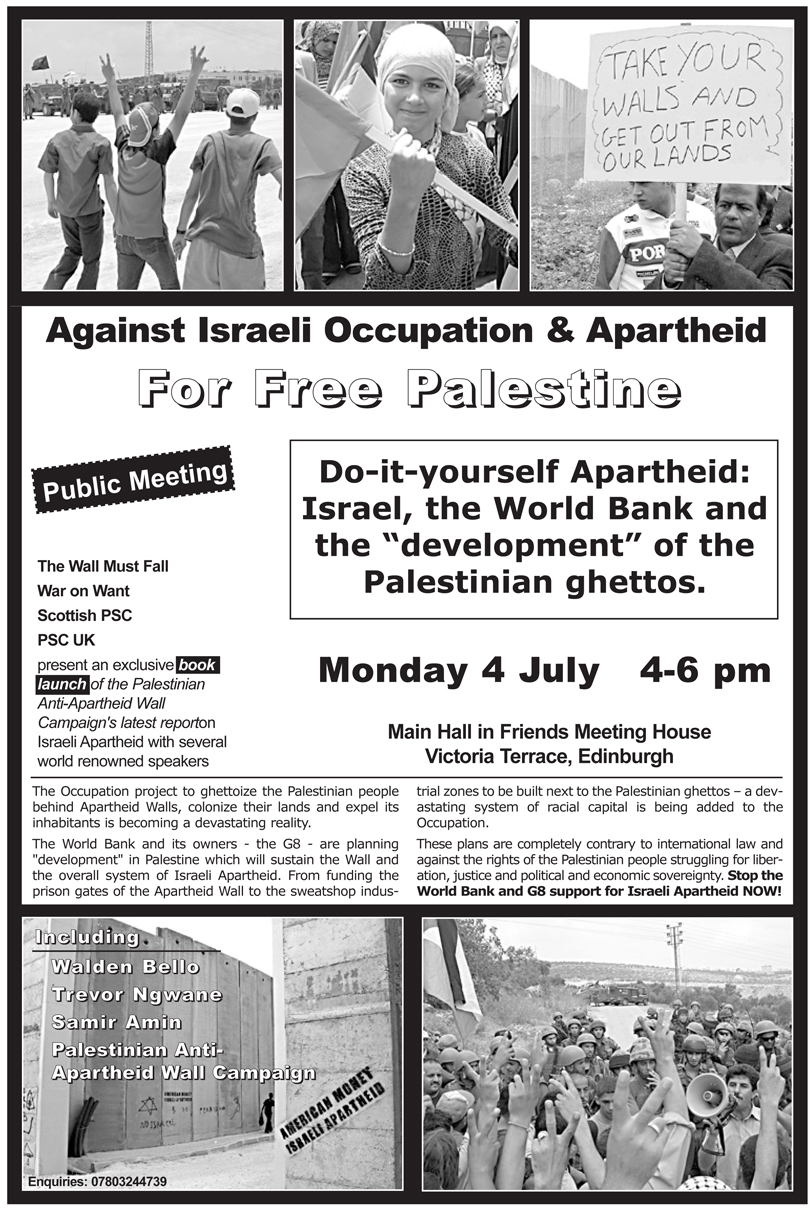 Against the G8 and World Bank support for Apartheid Israel!

One year after the ICJ decision, the Palestinian grassroots Anti-Apartheid Wall Campaign is protesting strengthened international support for Israeli Apartheid with the launch of a new report:

Israel, the World Bank and the "development" of the Palestinian ghettos.

It reveals the plans of the World Bank and its G8 owners to maintain the Israeli system of Apartheid and Occupation as a permanent reality for Palestine.

You can join the launch of the report at a joint event between The Wall Must Fall project and the Scottish PSC, PSC UK and War on Want.

Representatives from the campaign, joined by renowned economists and activists Samir Amin and Walden Bello, will discuss the role of global capital in supporting Israel and the need to build an international anti-apartheid movement to provide effective means of isolating Israeli Apartheid.

Join the Campaign at the G8 and support our call to:

Tear Down the Apartheid Wall!

The Occupation project to ghettoize the Palestinian people behind Apartheid Walls, colonize their lands and expel its inhabitants is becoming a devastating reality.

The Apartheid Wall and overall system of Jewish-only roads, settlements and military zones, completely strips the Palestinian people of their lands and imprisons them within a series of ghettos across the West Bank. A second Wall around Gaza will ensure its status as a hellish prison for the 1.3 million people locked inside.

The ICJ decision on the 9th of July 2004 recognized the illegality of the Apartheid Wall and added to the mandate from the Palestinian people: the Wall must be torn down and the affected population subsequently compensated!

However, the World Bank and its owners - the G8 - are planning "development" in Palestine which will sustain the Wall and the overall system of Israeli Apartheid. From funding the prison gates of the Apartheid Wall to the sweatshop industrial zones to be built next to the Palestinian ghettos – a devastating system of racial capital is being added to the occupation. These plans are completely contrary to the ICJ requirements, international law and against the rights of the Palestinian people struggling for liberation, justice and political and economic sovereignty.

STOP THE G8 AND THE WORLD BANK SUPPORT TO APARTHEID ISRAEL NOW!

The complicity of the international community and particularly the G8 in sustaining the projects of the Occupation reveals more than ever how Apartheid can never survive without global support.

The Wall Must Fall